Let's Go To The ZOO!

Emmett is a thinker!

You can see it in his every move as he contemplates life and then acts upon it. I wonder if any of his actions are random - or if all of them are for a purpose. For example, the other day Alisha was putting him down for a nap. He had a fish, his favourite toy of the day, in his hand (I say that because his favourite toy of the last couple of months is still a soft, pliable plastic hippopotamus). Emmett was waving it around while Alisha was getting him ready for his sleep time when Emmett started fussing. Looking to see what was wrong it was obvious that the toy was missing. Emmett pointed to the wall side of the crib - a place similar to the Bermuda triangle that has swallowed up innumerable soothers, toys, and syringes. (Yes, syringes! Emmett is surrounded by syringes on a daily basis so of course he wants to play with them. That's what little kids do. None of them ever have needles attached - just the blunt plastic end. Emmett doesn't need daily injections but the syringes are used multiple times a day to flush his G-tube, which is his feeding tube). Well, Alisha got down on her hands and knees to search under the crib for the toy - but no sign of that fish within easy reach. A moment later when she was fully committed to the task of crawling under the crib to get the fish, she heard Emmett giggling. Not finding the fish, she popped back up to see Emmett into a full on giggle and waving the plastic fish which was now tightly held in his fist! The little turkey had pulled a fast one on his mommy! So smart and so funny.

If you have been following the blog you know that a visit to the Vancouver Zoo has been in the works for months - well, it finally has happened. Lions, Tigers, and Bears! Oh My. And most important of all - a hippopotamus! Of course, it was a hot day so the hippo's just sat in the water and stared. But, ask Emmett if he saw them and he will respond with a resounding yes. Of course, the photo to our left where Emmett is obviously enthralled by some exotic animal ... it was a squirrel! LOL!

Too often people assume - incorrectly - that since Emmett has Spinal Muscular Atrophy that his mental capacity is limited. That is absolutely not the case and he is an extremely intelligent little one. SMA traps these little ones' bright minds inside bodies that simply don't respond. This disease has limited him in so many ways, but certainly not his ability to think. And with the help of Spinraza, his medical team, and his mom and dad - Emmett is working hard to regain the abilities that he lost. He has a new speech therapist who, after just meeting Emmett, commented that if it weren't for his disease he felt that Emmett would be chatting a mile a minute. Words are coming out more and more often. Grandma and Grandpa are quite clear! We are looking forward to even more chattering taking place.

We take so much for granted. We've said before that what happens with little ones with SMA, Type 1 is that the nervous system in the spinal column is quickly being eroded just like a mountain road can be washed away during spring floods. Sometimes so severely that it can never be repaired. Except in this case Emmett is a wonderful miracle baby involved in the drug trial for what is now called Spinraza. Approved by the FDA in the USA and hopefully approved in Canada by the end of this summer. This drug allows the messages from the brain to travel the spinal column network and make their way to Emmett's muscles. And not just to his limbs - but that is most evident. This goes to the muscles that tell his lungs to work, that tell his throat to swallow or cough, that tell his lips and tongue how to form words. SMA is the #1 genetic killer of children because it is such a terrible disease. Spinraza is the first medical approach to REVERSE the impact of this disease. There are many who have survived through significant medical intervention and who have reached a point where their regression has halted and for a time plateaued, but this is a degenerative disease. There is no evidence of a child or adult with SMA (there are different levels depending upon the severity of the disease and the age at which it is discovered) have improved. Until this amazing drug and, hopefully, even more amazing drugs that are going to be discovered in the future. 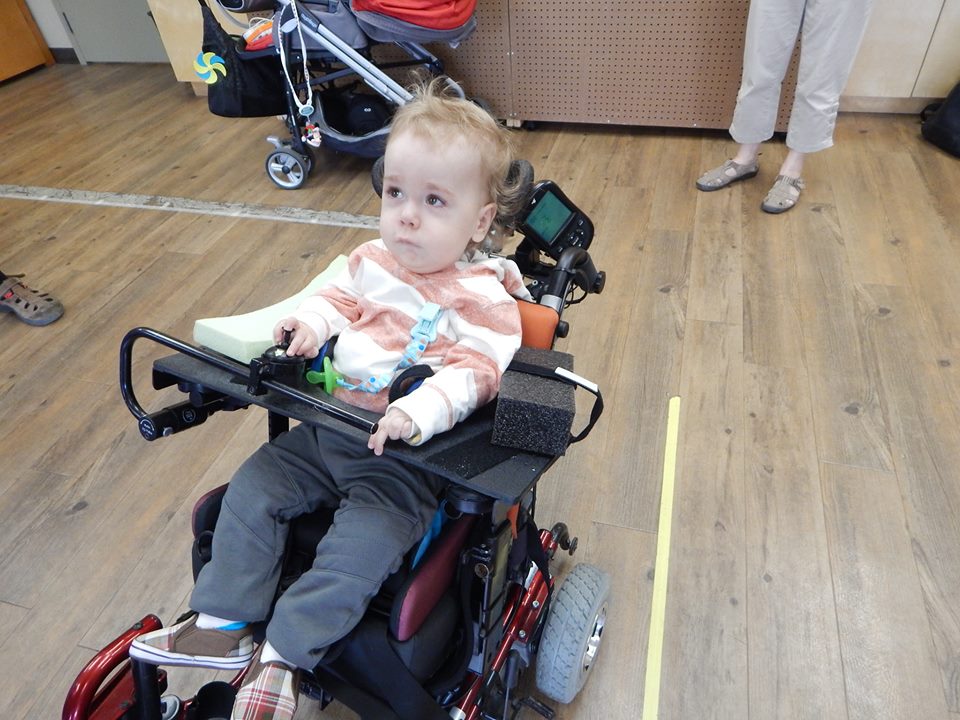 A year ago Emmett was checked out to see if a power wheelchair was a viable option. In May 2016 (the photo on the left is from May 2016! Isn't he cute!) he was just starting to lift his own head but he could not support it at all. He fully needed the head support. Any seams in the floor would jostle the chair and cause his head to flop and an adult would need to support it for him. If his arms fell from the chair arm rest, he could not pick them back up. He used one finger to manipulate the extremely sensitive joy stick - because he could not grasp it in his hand. What a difference a year makes. What a difference!

Emmett is getting ready to move back to a car seat from his car bed. He's meeting (so are Alisha and Josh) with part of his team of specialists to see if a car seat is an appropriate option. He cannot travel seated in the wheel chair yet - His neck strength is simply not strong enough - and he is outgrowing his car bed. Plus he cannot see anything from his car bed which is strapped to the floor.  Alisha has found a rear facing car seat that can handle Emmett's size and weight for a few more months - and then it can be forward mounted. The wheel chair van needs a new exhaust - just one of those things. That van has been in the family for almost a year and it is invaluable for transporting Emmett, his wheel chair, and all of his gear. Hmmm - maybe we should have a blog post about all of the stuff that must go with Emmett.

Enjoy this photos and video clips. We hope that, like us, you marvel when you see the movement that simply was not present just twelve months ago! 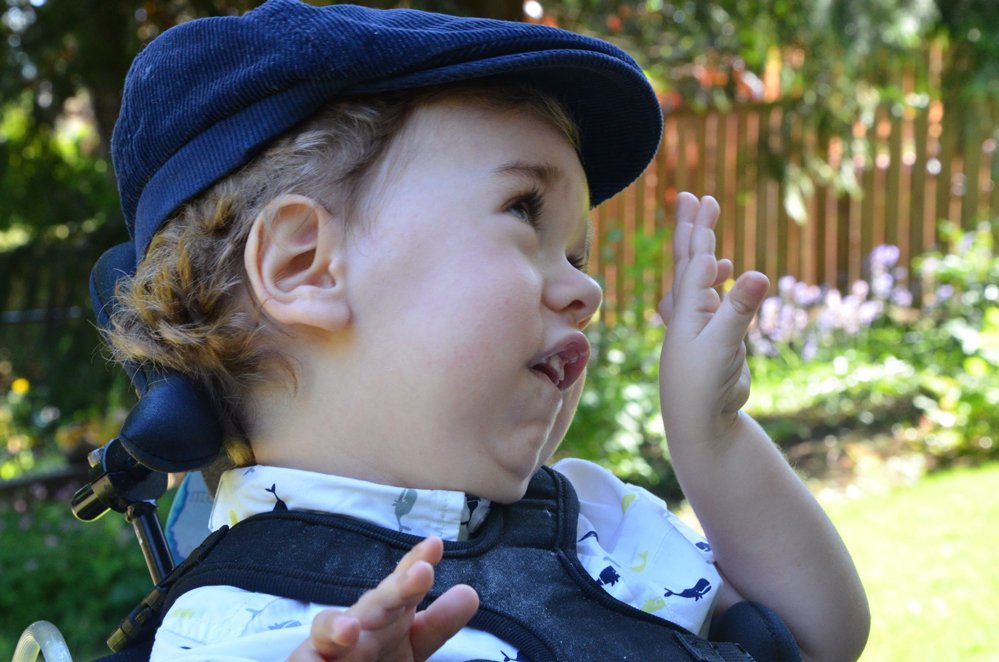 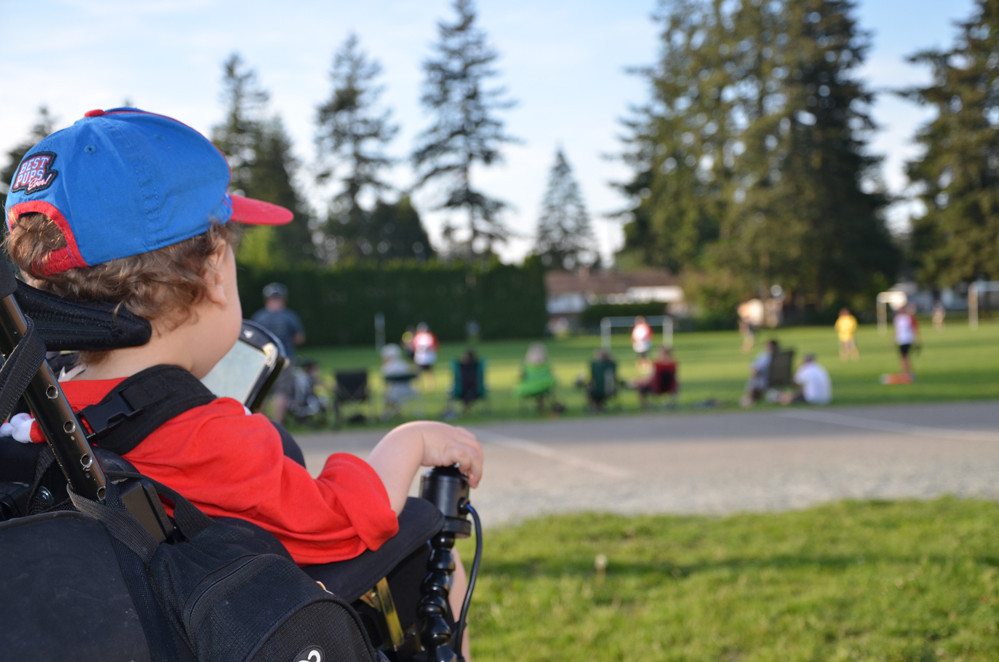 In this video clip you may watch and yet not realize what miracle you are seeing. Emmett is reaching straight out in front of himself to grab the tinfoil shells. It wasn't that long ago that Emmett had to lift his arm from the side and then attempt to move it to the front - often an impossible task. Yet here we see Emmett reaching out straight in front. Passing things from one hand to the other. Doing things we could barely dream of him doing a year ago. Things that in the fall of 2015 we couldn't even comprehend.

Okay, this next one is a longer one. Just so you're prepared before you start to watch in.

This was wonderfully informative. May God continue to sustain you as Emmett continues to astound you. I loved the story of the 'lost' toy. Blessings from the Meighen
Categories
Archives
/dailyweekly-thoughts.php
Site proudly sponsored by OSM | Powered By SiteApex