There Are Good Samaratins

The Good Samaritan in the book of Luke is a stranger who stops and helps another stranger on the roadside. Completely unable to help themselves, beaten up by robbers and left seriously hurt, the injured stranger was at the side of the road and obviously in trouble. That is, until the Samaritan came along and helped him to a place of care and safety. Thank God for good Samaritans.

Today I saw neighbours stop to help a stranger at the side of the road. The stranger - or strangers - were myself and Emmett. First, let me say that Emmett is wonderfully fine now. He spent the evening relaxing in a warm bath and then laughing and reading (rather, having stories read to him!). Of course, he also got to watch several episodes of Paw Patrol in a row. But there were a few moments this afternoon which can only be described as terrifying.

Emmett and I were out on a stroll through his neighbourhood. We went nowhere very slowly. We stopped to look at birds flying past in the sky. The neighbour's cat walking across the top of a fence. A travel trailer that has pictures of wolves on it - a mandatory stop on all walks. Emmett will often howl like a wolf while he is there. And, of course, we made honking sounds at every pickup truck that was parked on the side of the road as we passed it. Emmett really liked the shiny black one ... because he could see our reflection in the paint! When a city bus or truck passed in the distance, Emmett would make deep sounding honks - for the big truck! We chatted briefly with a couple of neighbourhood kids who noted that Emmett had a wheelchair so obviously couldn't walk. Hopefully we see them again on our next walk. We took a detour down a side street that we never take and, once turned around and heading back I figured that we could retrace our steps and head home. The short route. Emmett, however, turned left and continued on his journey around the long block so that is what we did. It was a lovely day and Emmett was enjoying himself. Me too!

Eventually, a bit more than half way around the block, I took over the rear controls so that we could make a bit better time. We got to the corner that turned onto his street, looked both ways and headed across. In the middle of the street I noticed that Emmett stopped chattering ... stopped his hand movement. Peering into his face I could see that he was choking. It happened that fast - while crossing the street. Right to the side of the road and got the suction machine out and running. But it didn't clear it. This was not a typical Emmett choking moment - one that happens way more often than we ever write about - that is cleared quickly with Emmett carrying on with his activities like nothing happened. Because to Emmett, that is a normal part of life. This moment, however, was not normal. I tipped the chair back so Emmett was parallel to the ground and more suction. Still nothing. Well, there was gunk coming out but nothing as far as opening his airway better. Got Emmett unstrapped, out of the chair, and lying down on the grass right beside the curb. More suction. While doing this I used voice activation on my phone to call Alisha on speaker phone (I do appreciate technology). I'm still suctioning. Patting Emmett's back to loosen whatever is there. Told Alisha where we were, I needed help, and to call 911. She came running. In sock feet and on the phone with 911 the entire way. Due to a hill in the street, she couldn't see us from her house but she got to us in record time. 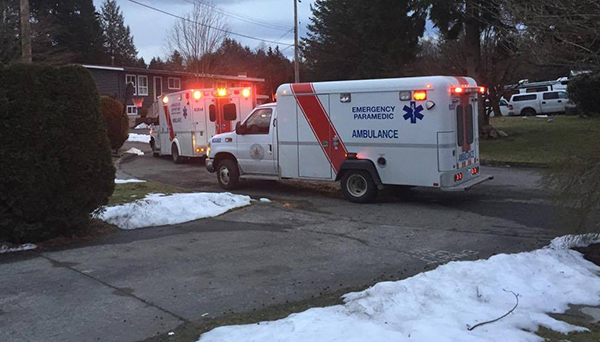 As Emmett's airway was blocked and suction wasn't clearing it, I did the reverse of artificial respiration. Rather than blowing in (compounding the blockage?), I sucked out. Did that at least twice. I'm still not seeing the reaction that I wanted, which was his little tummy going in and out like an old fashioned bellows, but I think Emmett's eye's started following me better. I thought I was hearing breathing. Very shallow, but something. Emmett is still lying on the grass and I'm beside him, one knee on the grass and one foot on the road. Empty wheelchair on the side of the road.

And neighbours we didn't even know came running. A man in a red car (too vague, it was a BMW Mini. Red, with stripes. I think it might have been a Mini Cooper but I'm not sure. Pardon me for being a car guy and just seeing things that aren't important). He asked if we needed help and 911 - I'm sure I said yes. A lady came from the house and asked if we needed a blanket - Alisha was already here by that time - and we said yes. Alisha took over suctioning and I continued lightly pounding Emmett's back. I picked Emmett up - butt higher than his head to help him drain. It was more than saliva - thick. The Mini driver could hear the ambulance but thought it went past - so he drove off to flag them down at the main road. The Ambulance team arrived before he got five houses away. By this time Emmett was okay. Alisha thought the worst was over as the paramedics rushed to Emmett. They took Emmett and Alisha to their house where - with his Bi-Pap and Oximeter and stuff - Alisha had almost everything needed for Emmett's care. His face was back to rosy red and flushed cheeks. They were obviously checking his lungs and they were crystal clear. No sounds of aspirating anything - which would have meant a trip to ICU. The oximeter was reading 100% - cannot get any better than that. The paramedics were awesome and, recognizing Alisha knew more about caring for Emmett's needs than they did, followed her lead. Professional, caring individuals who recognized the child's needs over protocol. Close monitoring throughout the evening. His nurse was in early and checked him out!

It took the wheelchair and I a few minutes to get back to the house. Arriving we maneuvered around the Fire Truck and Ambulances which were now gathered at the front of the house. There were at least 6 paramedics and firefighters in Emmett's room. As I arrived at his doorway, Alisha was now calm(er) and Emmett was looking at the team of strangers who were there to support him. His stats were coming back up. Not too much movement, but as the emergency was over and the team started to disperse, Emmett gathered enough energy for a wave. After at least three episodes of Paw Patrol - and it may have been six to ten episodes - Emmett's voice was back and he was complaining loudly when Marshal, Rubble, and the rest were silenced. Nothing like hearing that voice of complaint. It was great to pick up Emmett and feel him squirming because, earlier, he was so much more a rag doll than we now expect.

Whenever you see photos of Emmett if you look closely you'll probably see a blue and white machine. If he's outside that machine is housed in a black case and likely sitting on the back of his wheelchair. That is his suction machine and, while Emmett is doing incredibly well, it is his lifeline. It gets used regularly because Emmett cannot swallow. As a result, dealing with choking situations is something that Emmett faces daily. Multiple times a day but they are usually cleared very quickly. In fact, Emmett is getting better at coughing and clearing his own airway. You may hear us laughing about spitting and blowing bubbles - teaching Emmett to help keep his airway clear and this amazing little boy sometimes clears things up before we even get the suction machine turned on. We have been very blessed that Emmett has only had a few chokes that took more than suction to clear. For a baby/toddler with Spinal Muscular Atrophy, this is amazing. This was actually the first time that 911 has been called to support Emmett. And what fantastic support we got.

Thank God for the paramedics and the fire crew that showed up to help us out. They have my respect and thanks for the great work that they do day in and day out. Thank God for these kind neighbours who recognized that the man and little one on the side of the street needed help. Thank God for Alisha's presence of mind to be able to give directions to 911. And thank God that Emmett is doing fine.

The rest of us ... terrified at the fragility of life. Knowing that we looked both ways before we crossed the street and yet trouble still hit us! And if it isn't raining tomorrow, knowing we will be going for another walk. Just maybe not quite so far - half a block instead of a whole block.

Frank, I want to write something, but I can't. All I can say is the right people at the right time in the right place and that is NO accident. Praise God for His watchful eye.
Guest Comment 5 years ago
Site Visitor
+1

So glad everything is okay. Love and continued prayers from Uncle Greg and Mary
Guest Comment 5 years ago
Site Visitor
+2

Frank, I was reading in my devotions today, "Always remember, when God made you (Emmett) He did so with a purpose and a plan...." Thank you God for the lives that have been touched and changed by Emmett's Journey already and I pray for his little life and the lives he will touch.
Guest Comment 5 years ago
Site Visitor
0

Thank you for all of the comments. We so appreciate your thoughts, comments, prayers, and support. The Japanese text reads "I am also a mother with a child of SMA who is 1 year old. I could read it with tears and could not help commenting on it. I am always worried about my child's illness. Emmett, I'm really very glad. I will pray from now on. From a mother in Japan."Dear Mom in Japan, I hope that Google translates this for you. I hope that your little one with SMA is doing okay and that you have a great family close by to support you. Thank you for writing. Emmett's Grandpa, Frank日本の親愛なるお母さん、私はGoogleがあなたのためにこれを翻訳することを願っています。私は、SMAのあなたの小さな人が大丈夫だと思っていて、あなたをサポートするために素晴らしい家族が近くにいることを願っています。書面ありがとうございます。エモットのおじいちゃん、フランク
Guest Comment 5 years ago
Site Visitor
+1

Frank, it is a wonderful blessing that you can be such a daily part of Emmett's life, along with all the rest of your family. My prayers are always with you! Thank heaven for all the caring people who are willing to jump in and help!
Categories
Archives
/dailyweekly-thoughts.php
Site proudly sponsored by OSM | Powered By SiteApex