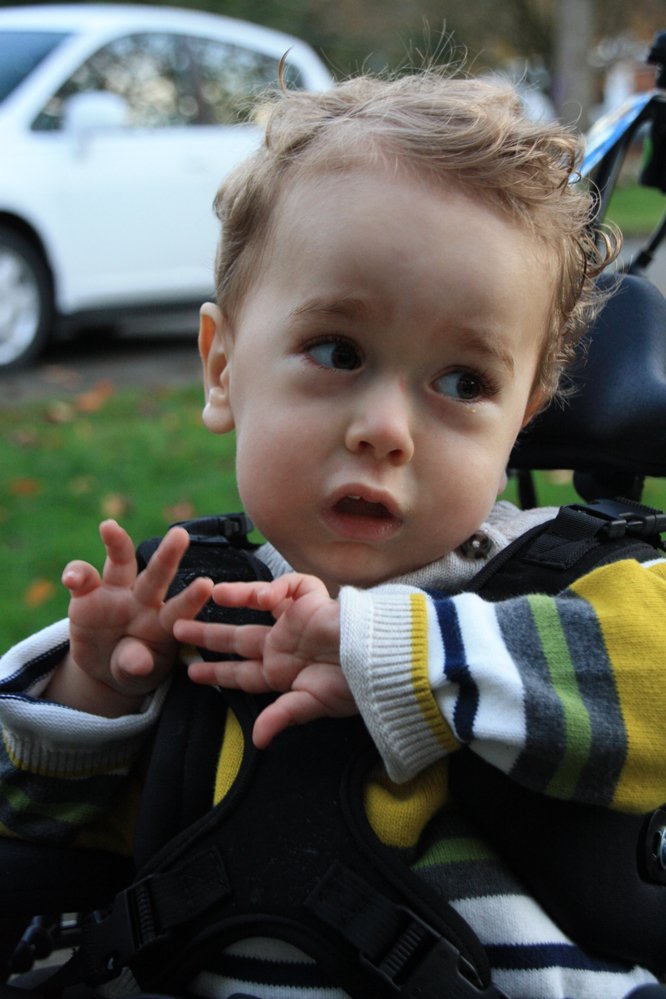 In this blog I have to tell you that Emmett does not have a new balloon! Even though it is Emmett's birthday - no new balloons. Even though he is signing for more in the above photo, there comes a moment when you have to be tough and say 'No'! After all, should we continue to spoil him? give him everything he wants? make sure he's always inspired? entertained? Tough Love - even for the little boy whose eyes will cause you to bend to his every wish. Tough Love - stand firm on the stance of no balloons for his 20th month birthday, a day on which Emmett is showing continued signs of strength and genius. In the photo below we've just told Emmett about our no new balloon plan! 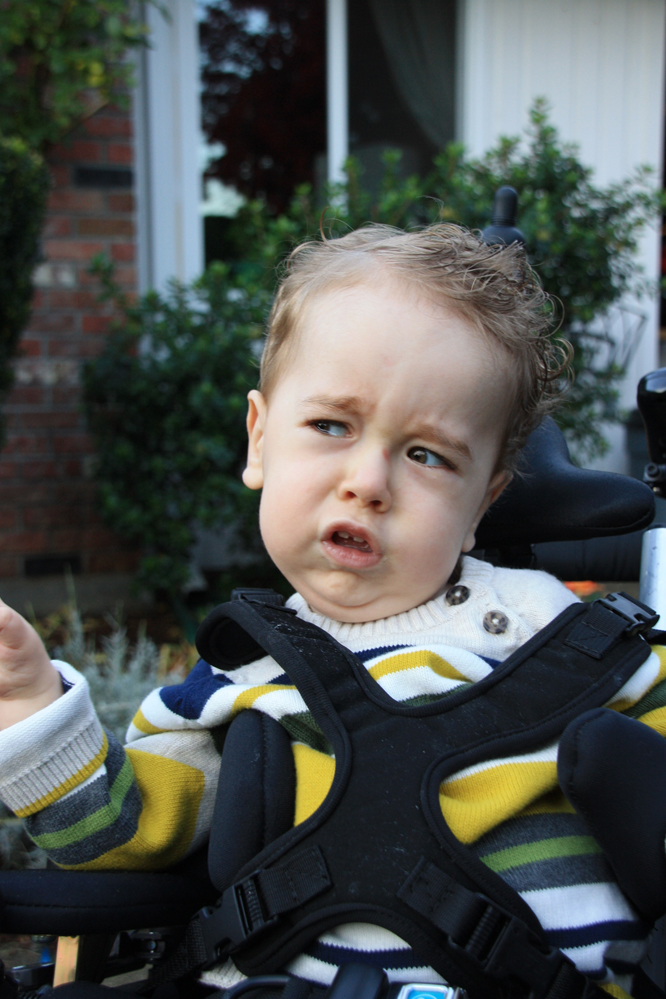 Yup, no new balloon for him. As we start an austerity program just in case the world economy crashes drastically, Emmett is only getting hand-me-down balloons. We've refilled Nemo the Air Swimming fish (which costs more than a regular helium balloon, but that's another issue) - but Emmett still isn't really to excited to have this giant orange clownfish swimming around the room. He loves it when it's not moving. Emmett hits it on the nose (or the eye) and then chases after it in his chair. And since the clownfish came in a twin pack with a shark - when Nemo bites the dust then the shark will come out. We will find out if little ones have preconceived ideas about creatures of the deep with sharp teeth. Of course, Emmett has a couple of weeks old Paw Patrol balloon that is a regular sized normal balloon that is fun. He still loves letting balloons go and watching them hit the ceiling.

And then there's Ella. Ella is Emmett's best inanimate object friend. Initially Pamela thought I was crazy to buy Ella the purple elephant - because Ella was at that point (before the air swimmers) the most expensive balloon that we have purchased. Emmett can say 'Ella the Elephant'. Now, maybe the last two words you have to have a really good ear - but there is absolutely no question about Ella! The other night he went to sleep murmering 'Ella Ella Ella' over and over again. I burst out laughing on Monday because Alisha texted me how she sent Emmett off to find Ella. He was in his chair - and he's really quite good at finding his way about - so off he went searching. There was a problem, however, as Ella was off with us to get a refill of helium so was not anywhere to be found in the house. Nemo was also gone - so Alisha had a frustrated little boy on her hands! LOL! Or if I want to be hip, then 'ha ha ha!' (Alisha tells me that LOL is so old school that I'm dating myself. My Bad.) (I hope that My Bad is also past it's prime - I've never used it because I think it's a silly saying, but if I irritate Alisha a tiny bit it may be worth it!). The best thing about Ella the Elephant is that she comes with a lifetime of free helium refills! We've been worried for Ella's life a few times, as Emmett has literally squashed Ella between furniture and his power chair! Ella's life flashed before our eyes, but she remains full of gas! Emmett is getting lots of value with Ella! If you live near us, stop in at EZ Party on George Ferguson. Tell them Emmett sent you - they are great at filling helium balloons! 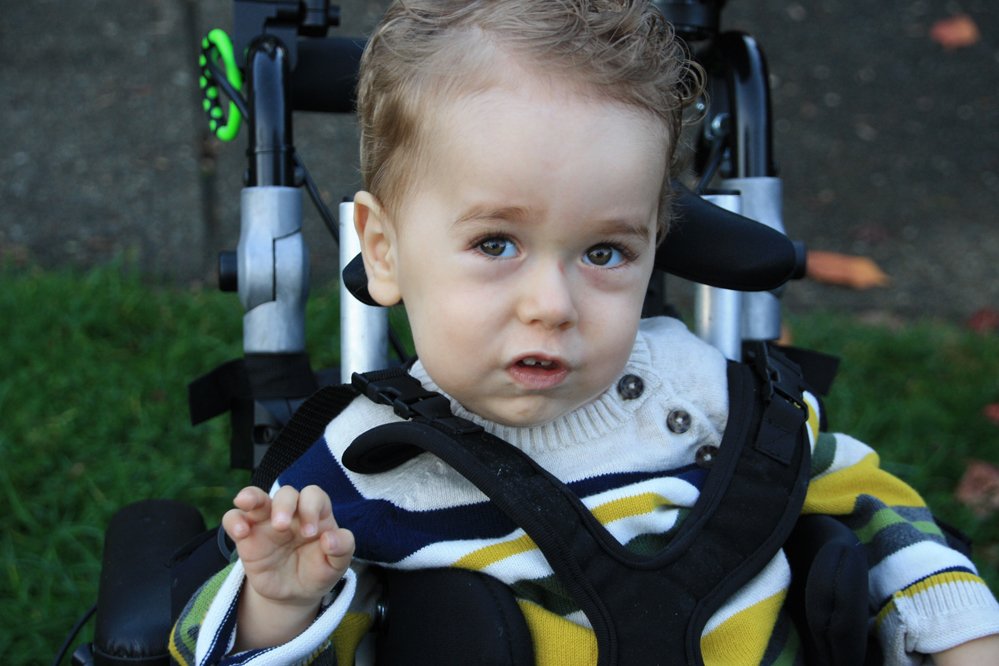 You know, we do laugh. Emmett is so much fun. Alligator Baby has been his favourite book for a few weeks now although he may be tiring of it. It is unfortunate that he is tired of it, because he knows all of the actions and sound effects. On cue he goes 'whaa, whaa, whaa' to show the baby is crying. He shrieks when the Alligator baby bites the mom and then the dad on the nose. He uses his hand to signify knocking when the parents go blam, blam, blam on the door. Of course, Emmett's 'blam, blam' on the door is quite soft. But now he is tired of it. And when he's tired of a book, he's quite able to show it. He shakes his head from side to side and expresses his displeasure until you set the book aside. If you ask Emmett if he wants to read a book that he doesn't like - you'll get the shaking head. If you suggest a book that he wants, you get a positive expression and his head vigorously nodding yes. Mind you, it might be twenty books he doesn't want before you get to one that he likes. Alisha has narrowed it down to stories with animals, stories with rhymes, and stories that aren't too long. Of course, like everyone else, he likes his readers to use a lot of expression. Right now his favourite book is I know a Rhino - and at the part where there is a tea party he holds up two fingers and then three to show the number of spoonfuls of sugar required. The Rhino is the one who likes three spoons!

Emmett loves to laugh as much as we do. His giggles are infectious. When he fills his diapers with poop he giggles about the stinker that he has become. When the adults tell a joke it is amazing how often Emmett will giggle just a moment before the adults in the room have understood the punchline. He does it so often that it cannot be chance.  Alisha's friend, Kate, has been visiting and captured Emmett's antics with her camera for all of us to view. Kate is also a speech therapist and is quite impressed with Emmett's attempts at verbalization. You can imagine that we are looking forward to more communication as Emmett gets older and his muscles get stronger. You see, SMA affects speech too. There's literally nothing that this disease doesn't affect. 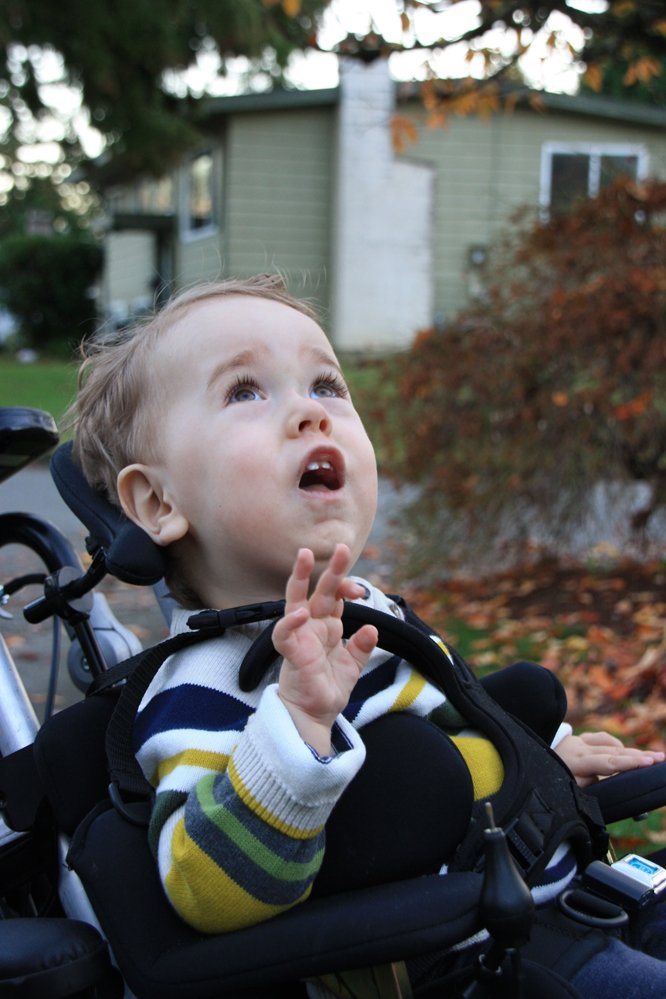 The sense of wonder that Emmett has is fantastic. He loves watching. He watches birds outside his window playing in the trees. Seeing cats and dogs playing and walking in the distance - he's not ready for close up just yet. He has a fascination with his bedroom light - shaped like an airplane - and a highlight is being held up high so that he can spin its propellor or touch the fuselage.  This fascination was captured in this photograph when, possibly for the first time, Emmett saw an airplane flying high over his house. The look of astonishment on his face is incredible. There is no way that the occupants saw this little boy in his wheelchair waving at them, but that didn't dampen his spirits or smile. Nor did it stop him from waving. I think Emmett's going to have to go to work at church with his dad soon. Not because Josh is a Youth Pastor but because the church is right beside the airport. Time for Emmett to watch planes land and take off. Curiously, when Alisha was little she liked watching trains. Planes were a second choice.

Emmett's mobility continues to amaze us - have wheelchair will travel. At home, to make things easier, all of the grandparents got together (and uncle Ben and 2nd cousin Jason) to build some ramps at the back door and in the garage. Emmett can now drive his chair out the back door, onto the covered porch, then through the garage and into the front yard. This is not only easier for Emmett. It's easier for Alisha and Josh. That chair is tiny but it sure does weigh a ton.

Emmett was at Canuck Place for some down time and a chance for him to experience a change of surroundings. Plus a bit of respite for his mom and dad. The staff there were quite amazed at how well Emmett maneuvered around items in his power chair. It is really quite amazing to see what he can do. While there he got to hang out with Nicholas. I didn't hear if they had races in their chairs but they have a lot in common. You see, Nicholas is a four year old little boy who has SMA. He also has a smile that will move mountains.

Emmett, happy 20th month birthday. There are extended trials for the drug Nusinersen - what a fantastic birthday present that other little ones with SMA are now getting an opportunity to have this drug.

From Emmett, Alisha, and Josh to all of you - thank you for your support and love! 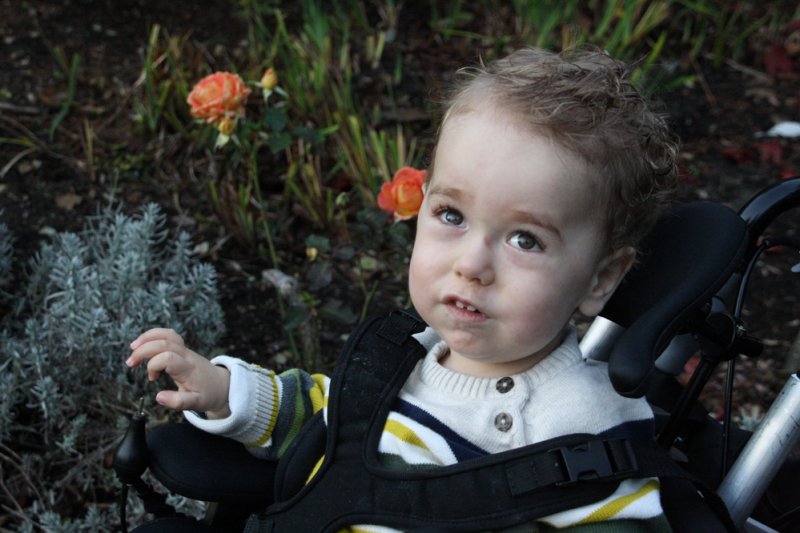