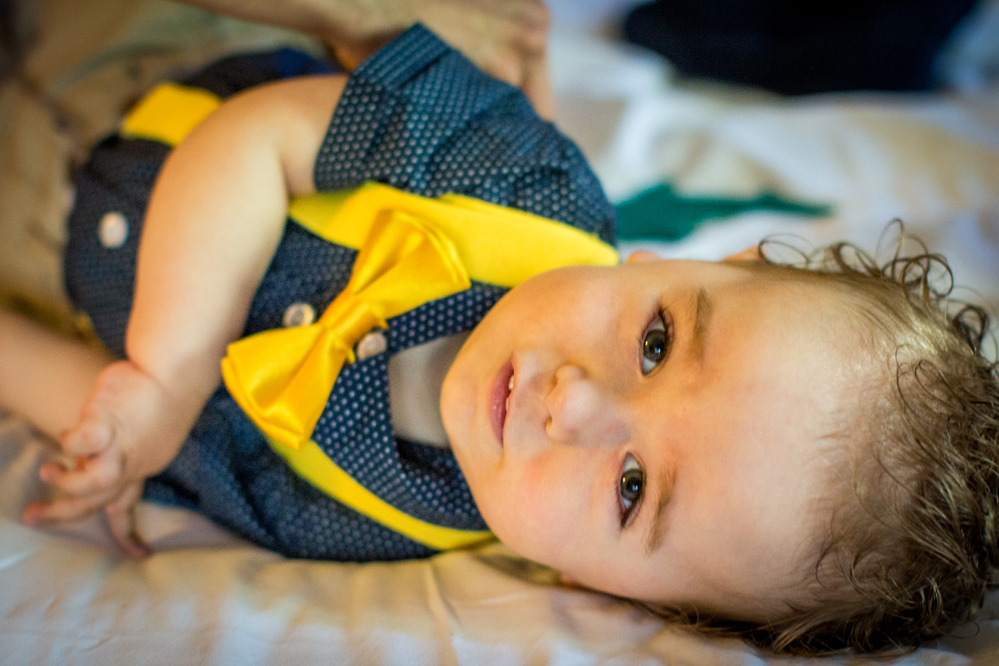 Yesterday Emmett's Great-Grandmother asked me if it wasn't Emmett's birthday already. And since it had passed, asked why there wasn't his normal birthday blog? Well, I was camping in the U.S. near Mount Baker so I didn't have access to the Internet let alone my computer. But, two days late here it is! Happy 17 months and 3 days, Emmett. We are so proud of you. 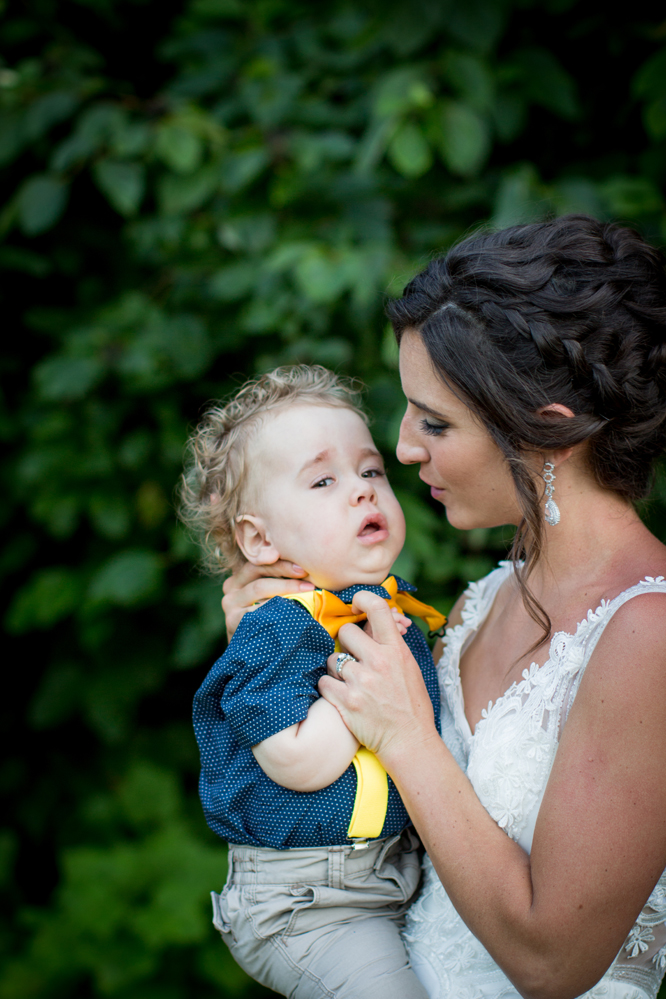 Emmett has been a very busy boy with little down time. At the end of July he was the ring bearer in his Aunt Katie's wedding to his new uncle Josh. This wedding took place at Squamish, B.C. on top of a 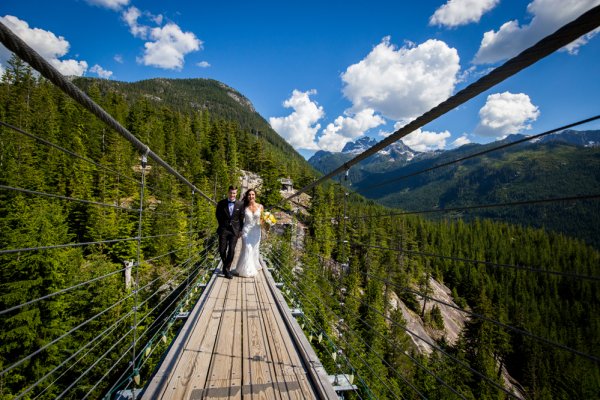 mountain. Fortunately for everyone, rather than climbing the mountain to get there the Sea to Sky Gondola was there to transport everyone to the top. It was a very intimate family wedding and the setting was spectacular. Emmett missed out on a few pictures as the hectic pace of the day and the normal hustle and bustle of a wedding simply was too much for him. Combined with more heat than we've usually seen here in B.C. this summer and Emmett was simply not at 100% and, shortly after the rings were picked up from his care, he had to be excused from the ceremony. Fortunately, he bounced right back once he got into some air conditioned comfort and he could tell that everyone around him was relaxed. 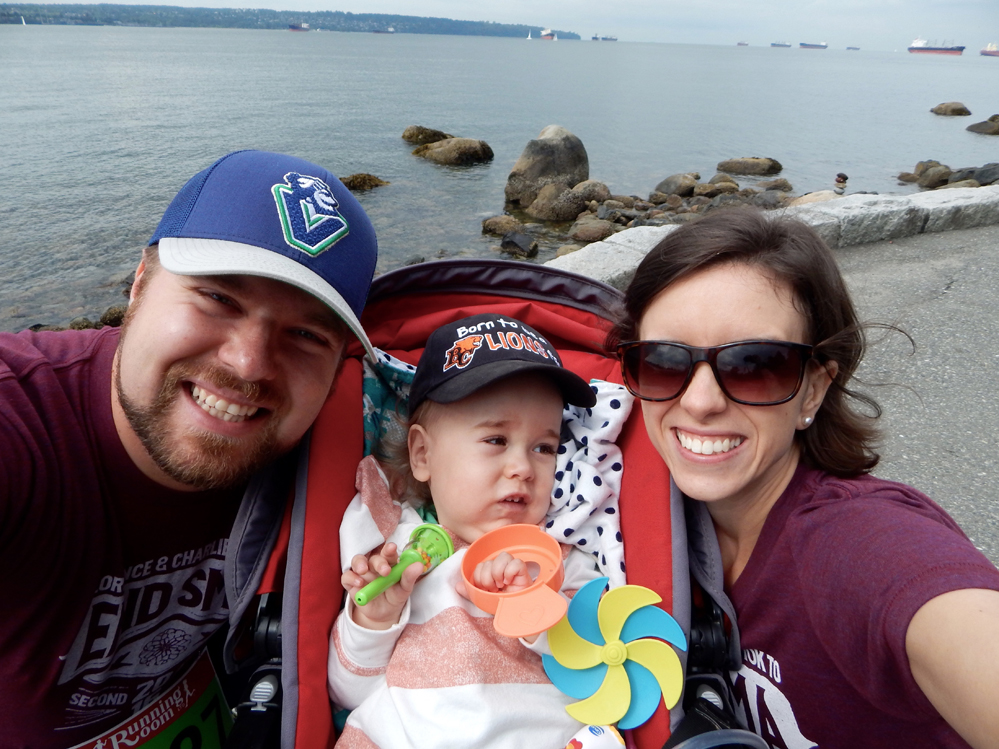 Last Sunday Emmett participated in Charlie and Florence's 10K Run/Walk/Roll to End SMA. It was a fantastic weekend and over $52,000 was raised for SMA Canada to support the search for a cure. Emmett was out and about prior to the race start in his power chair - demonstrating his moves to anyone who would watch but mainly simply enjoying the movement himself.  Charlie and Florence's 10K event took place in beautiful Stanley Park. Emmett chose to go against the flow and did the course backwards from the start, meaning that he got to spend lots of time on the waterfront. This also meant that he got to cheer all of the runners as they came past. Emmett didn't take his power chair as he would not have stayed on course (He is good, but that's expecting too much of a 17 month old). Alisha and Josh pushed him in his stroller. Emmett learned to cheer whenever a runner or walker passed him - usually the cheer came after the runner was already out of sight - but it is the thought that counts, right! 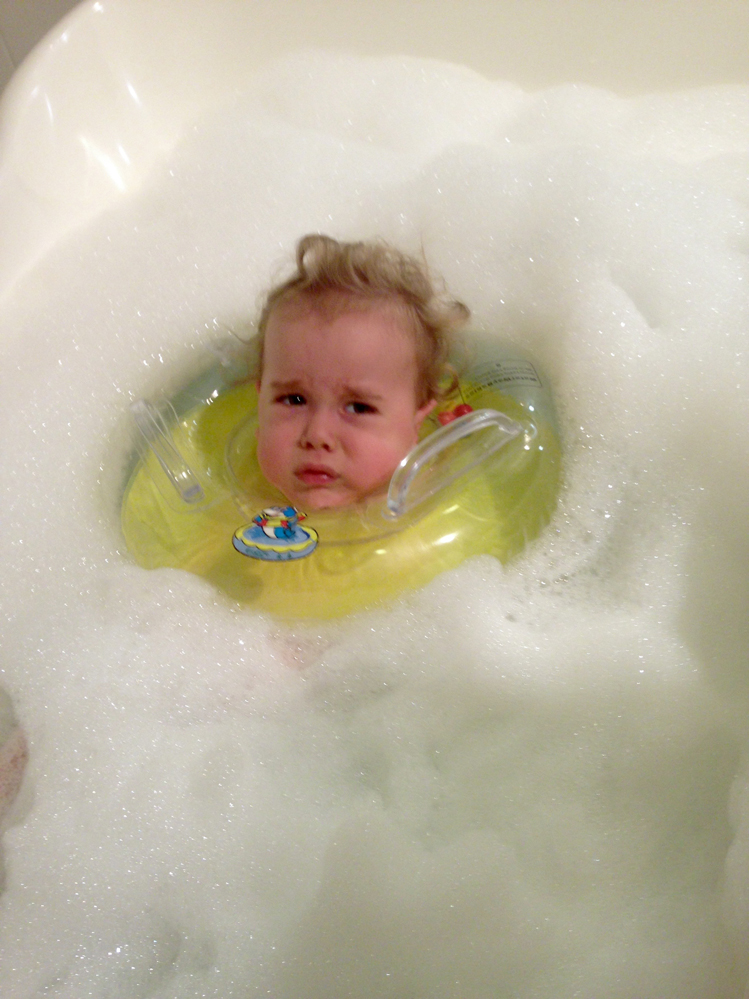 While he is demonstrating some amazing skill with his chair he also demonstrates that he is only 17 months old. For example, at Canuck Place there is a two metre tall statue of a bear. Emmett loves bears and loves growling like a bear. This colourful statue is like a magnet for him and, ignoring the flower bed at the foot of the statue Emmett powers right up to the bear. If he hit it at the right angle, I'm sure that the chair would go right up on the base and topple backwards. Good thing that his parents realize that Emmett cannot be trusted to drive on his own. He is absolutely still considered a novice and an adult must be with him at all times. Canuck Place is so amazing and Emmett is treated like a rock star (they treat all of their children like rock stars!) and while there Emmett got to have a luxurious bubble bath. Which he absolutely hated. His face was a big frown. His arms and legs were pulled into a fetal position (good moves here Emmett) and he didn't move. He just wanted out! That was one new experience that will take a few more attempts before he learns to enjoy. Another experience that was fantastic was the snoezelen therapy room. This multisensory environment of light and sound is just a wonder for Emmett and makes his sound and light turtle or his Disney light wands pale in comparison. Fortunately for Alisha and Josh, (if you're wondering, the answer is yes. Alisha married Josh. And Katie just married Josh. LOL!) Emmett still loves his turtle. But the snoezelen therapy room was awe inspiring. 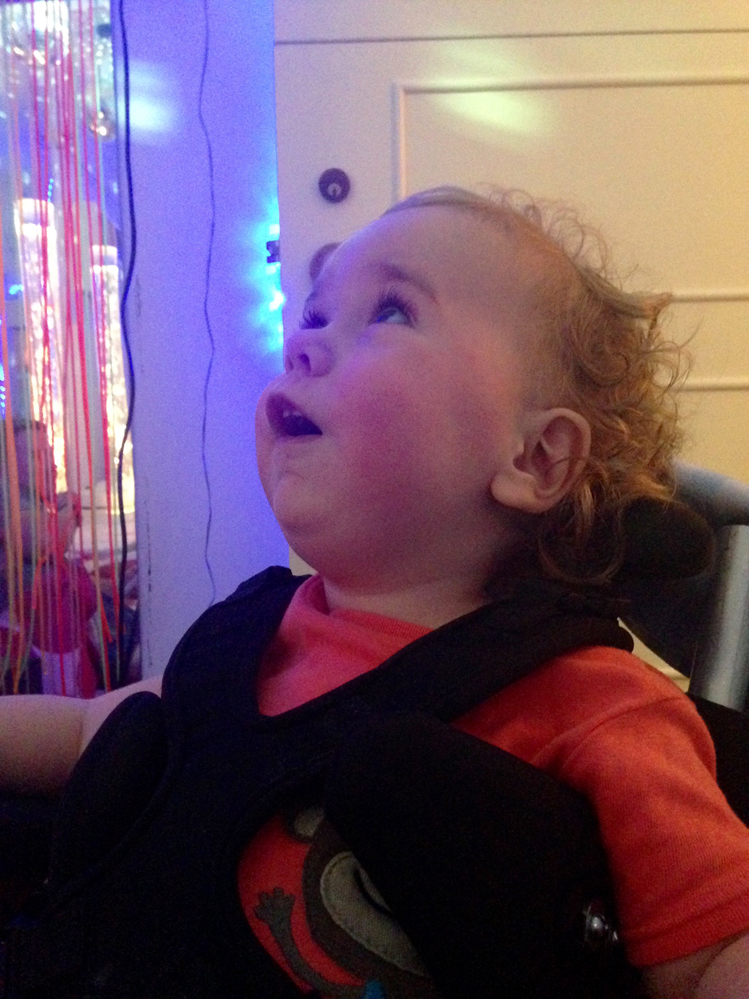 There's no doubt that you're likely wondering what kind of birthday helium balloon Emmett received. It was one day late (he got it yesterday) and it is a cool elephant balloon with paper ears and legs. The paper weights it down so that rather than floating on the ceiling it actually floats near floor level and looks like it is standing on it's own legs. Speaking of standing, Emmett had his legs casted yesterday so that they can make AFOs (ankle foot orthotics) that he will use in his standing frame. It is important to keep stretching the horizons of this little one by stretching his muscles. So as you can tell, this has been a tremendously busy few weeks for Emmett. Especially when you consider that between the wedding and Charlie and Florence's Run, Emmett was in BC Children's Hospital for the final part of the study that he is involved in with the drug study. We won't be getting an official answer as to whether Emmett is getting the real drug or not yet because Emmett is now involved in another blind study. Children in the first study go through the same process as the first study, except everyone gets the drug. But if you got the drug in the initial study, these children will get a placebo in the rapid phase and only get the real drug during the four month intervals. Just to maintain suspense and test the effects of the drug. Which we do believe Emmett has been receiving.