Emmett's On The Move!

Emmett Is On The Move! 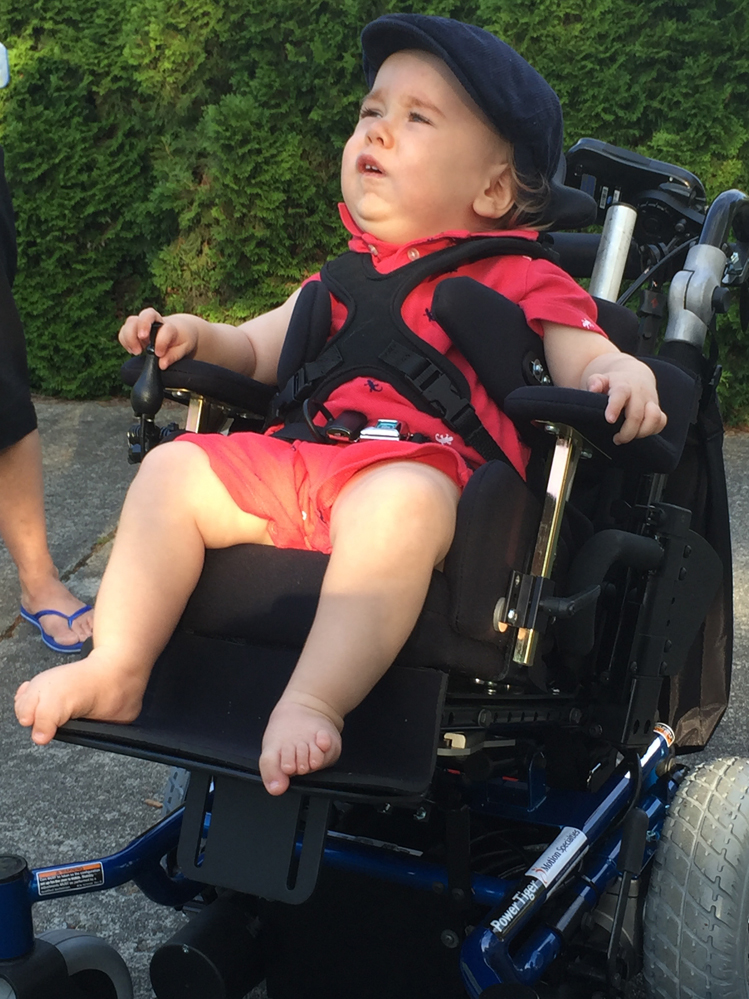 As you know, Emmett is 16 now (months, not years) so it was only natural that Emmett gets his own set of wheels! Believe it or not, it wasn't just Josh pushing for Emmett to get behind the controls. It was Alisha too! In fact, it was all of us! Everyone surrounding and supporting Emmett. You will remember that he had an innovative little electric 'cart' that allowed him to move about. While it was a curiosity, in practice it didn't work effectively. Rather than a joystick it had four buttons and that was simply too complex for this little guy (even younger at that point). But more challenging was that the wheels were only friction fit to the drive axles meaning that any incline or complex terrain (like carpet) and the axles would slip while the wheels stood still. (Yes, I could have fixed it BUT I was under strict instructions from the occupational therapist not to modify it. Or future equipment loans could be affected.) 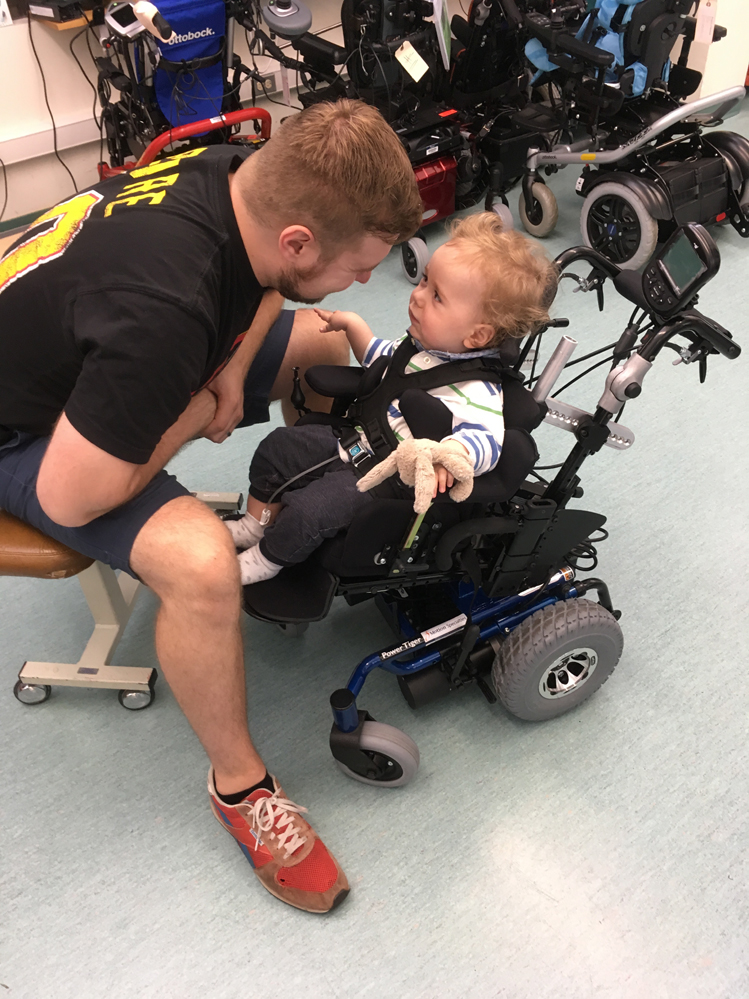 Then you saw the photo of it a while ago where Emmett got to try the power chair out. That was the start of Emmett's involvement in a mobility study. We are so pleased with the support that Emmett is receiving through British Columbia Medical Services Plan. His medical team has been doing so much for this little boy. Today's focus is going to be upon his Occupational Therapists. Emmett has three. In BCCH Emmett met his first OT who has stayed involved throughout - mainly during visits to BCCH. His local OT is here and supports him actively with home visits and comes up with ingenious devices to encourage Emmett to move and get vertical. She got Emmett involved with the OT who's working with kids from a wide geographic area in this mobility study - who then saw that Emmett had great potential for effectively using a chair. The result, he was accepted as a candidate for this mobility study and at 16 months Emmett is the youngest person in B.C. that we know about with a power chair. And Oh My Goodness - Emmett Loves It! 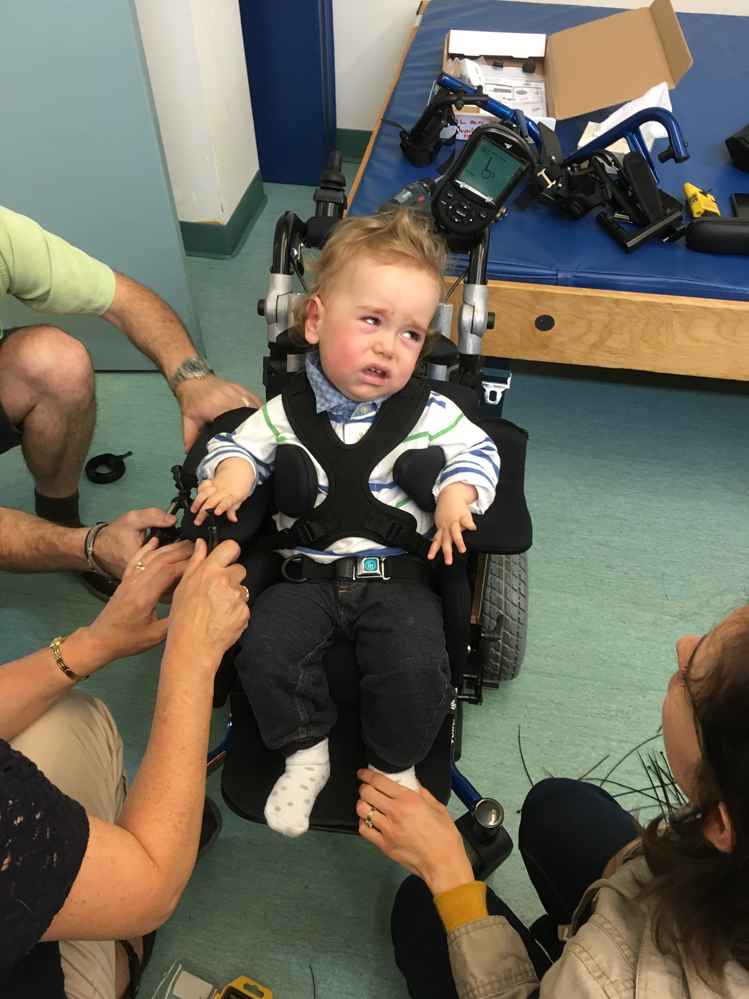 Now it wasn't all peaches and cream. Either Emmett remembered that he got to sit in this chair (actually, a similar one) and didn't get to keep it (quite a sad day) OR he simply didn't like the two or three hours that he had to stay awake and miss his nap time while the technician was fitting him and his chair into/onto the power chair with wrenches, drills, and other power tools. Yes, the same technician who worked on his previous equipment and has done such a great job with the custom work to make Emmett's adaptive equipment comfortable for him. In fact, it is one of these chairs that is actually fitted to the power chair. Emmett was quite cranky with all of this sitting and strange mechanical noises going on behind him. Even worse, when the joystick was active Emmett did a 180° turn and found himself nose to nose with the technician. He was so startled that he started a 30 minute crying session. Alisha and Josh had to get him out of the chair and let him have some quiet time in his own space.

When he was settled down and ready for some more seat time, his power chair was ready for him. Look at the pic to the right where he's fussy. Even there you will see his right hand on the joy stick. This little boy was ready to move. He is alternating between using one finger on the joystick to having his palm on it. Just as exciting but easily overlooked, Emmett has been holding his wrists straight on his own. That probably makes it even easier for him to control his new chair. 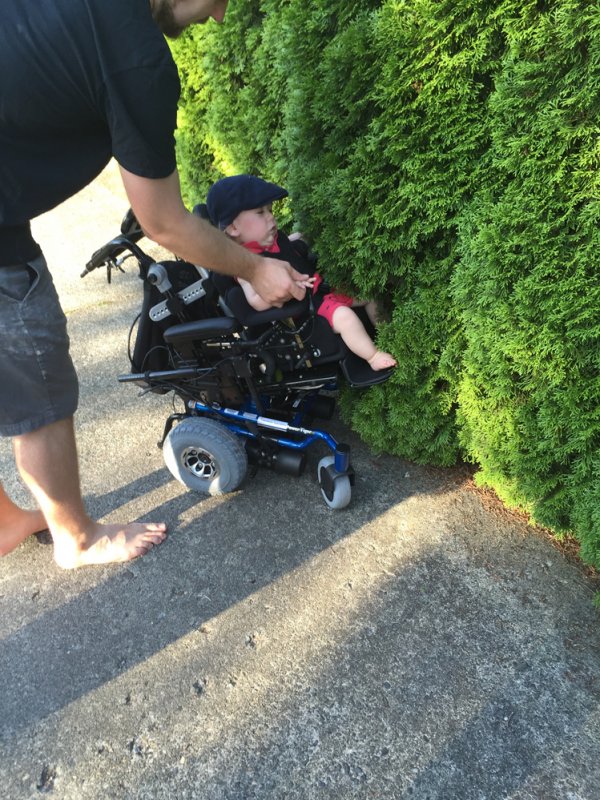 Like most novice drivers, Emmett's experiences behind the controls have not been flawless. In fact, he's going to make his mark on the world. Or at least, on Alisha and Josh's house. If you've followed Emmett's Journey then you know that one of his favourite games is dropping things on the floor. Not only does he enjoy the activity and having someone pick the items up for him, but he loves the sound of the item hitting the floor. If it's one of his helium balloons then it's the sight and sound of this hitting the ceiling. Unfortunately, his Seasame Street balloon was released while he was out on the back porch. While it hit the ceiling the wind current also caught it and Emmett watched it sail away (start humming the soundtrack to the song 'Sail' here). Back on topic, he has quickly transferred that love of banging to his wheels - and giggles when he crashes into the wall ... then does it again! Josh is absolutely hoping to quickly teach Emmett that this is not acceptable! Of course, it is very hard not to laugh as he is exploring his surroundings and banging into things. Simple things, like being able to touch something that he wasn't able to get to previously. Turning around ... and around ... and around. No question, doing circles is the easiest thing for Emmett to accomplish. He is, however, seeming to understand how to use the joystick to make the power wheelchair go where he wants to. Remember, this 16 month old has only had this for two days. We're pretty impressed with what he's able to do.

This is so exciting but also has brought a huge number of challenges. Alisha and Josh have temporary ramps to get this wheelchair in and out of the house. They can also use them to get the wheelchair into a van or truck. It may be small but it is quite heavy so physically lifting it is not recommended. Funding is available to obtain a permanent ramp to their house. Upgrading their compact car to something like a van is going to require some help. Stay tuned for further information about a van fundraising initiative to help this young family out. They're trying to figure out what is best - a full mobility van now or just a larger vehicle for now that can handle all of the equipment Emmett needs when he leaves the house. There are so many unanticipated expenses with a medically fragile toddler. The exciting thing - Emmett is a toddler now. Our baby is growing up and we will do everything we can for this little man. 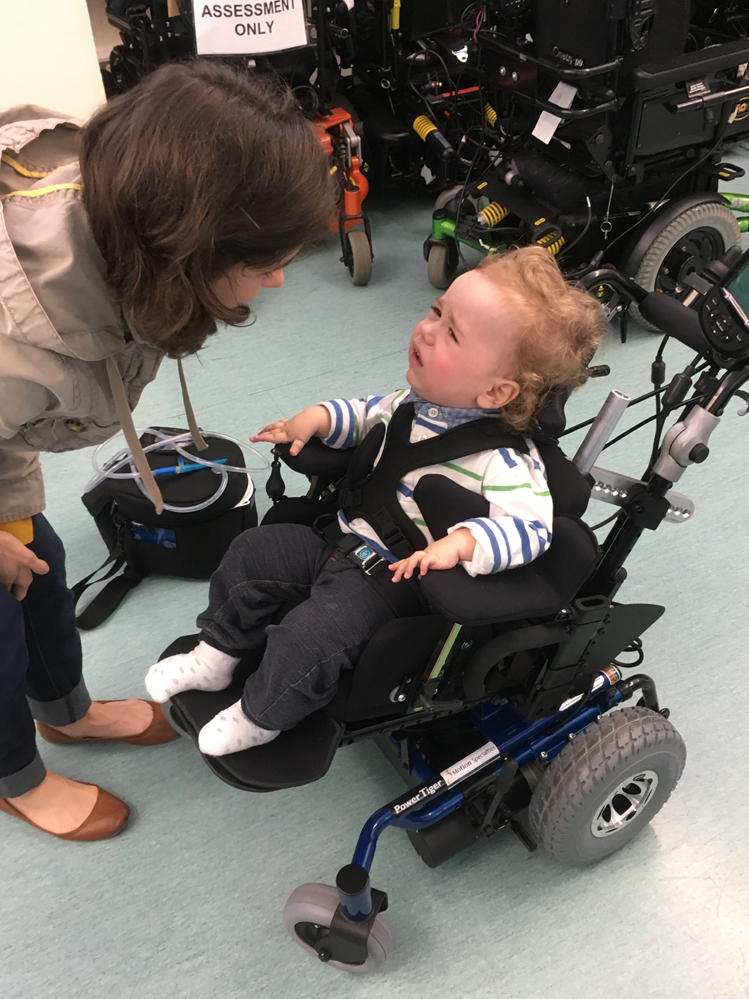 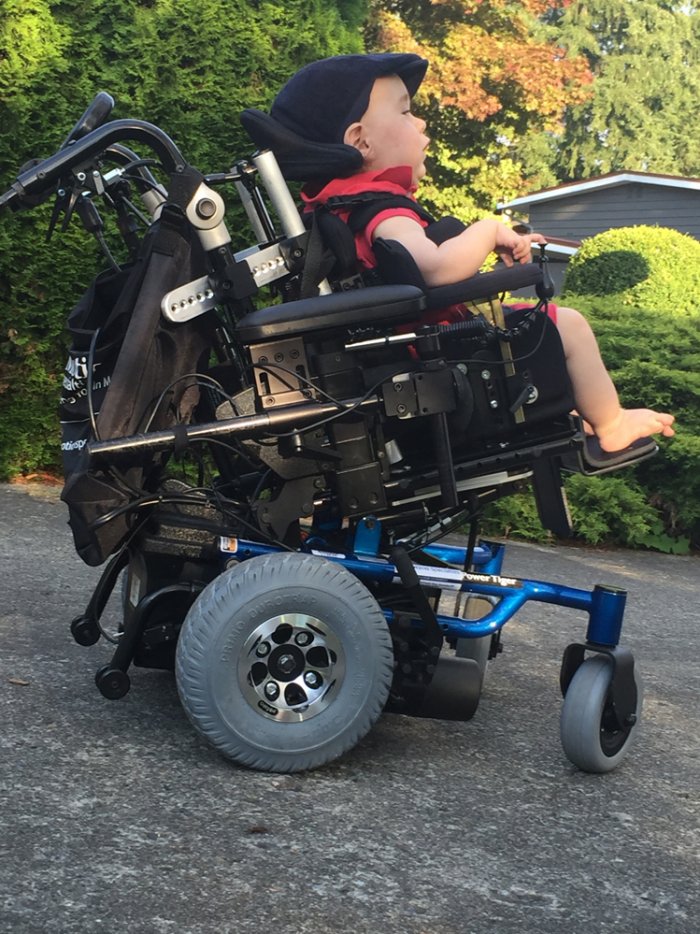 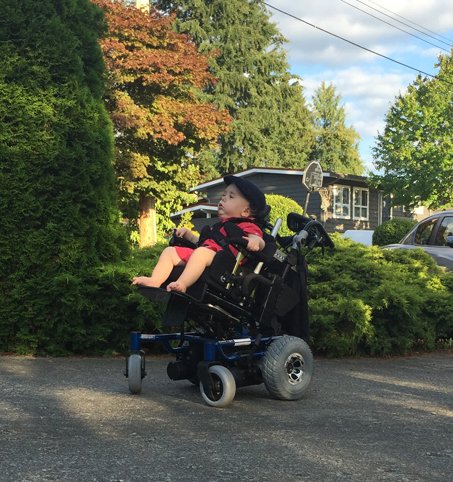 This was wonderful to read - on so many levels. That the Medical Services Plan has been so helpful, that the OT's and technicians have been both skilled and very personable, that the difficult to use electric cart was replaced by this astounding chair, and best of all, that Emmett can control it and even make it clear that he finds delight in the wall bumping, Hopefully you can find a suitable spot for the banging without denting! May this summer be a very happy time for you all! Bob and Luella Meighen
Guest Comment 5 years ago
Site Visitor
+1

This sure put a big smile on my face. The joy in Emmett's face is tangible!An Ontario friend, Maureen
Guest Comment 5 years ago
Site Visitor
+1

Emmett is going to get the shift stick down pat! Look out Grandpa Ewald, before you know it, he will be taking over your race car! So Happy for you! Praising the Lord for these blessings! Love
Guest Comment 5 years ago
Site Visitor
+1

Such uplifting comments on your families journey. Such smiles. Will follow this journey wishing all your family prayers and love. Mrs. Valerie Hertel
Categories
Archives
/dailyweekly-thoughts.php
Site proudly sponsored by OSM | Powered By SiteApex