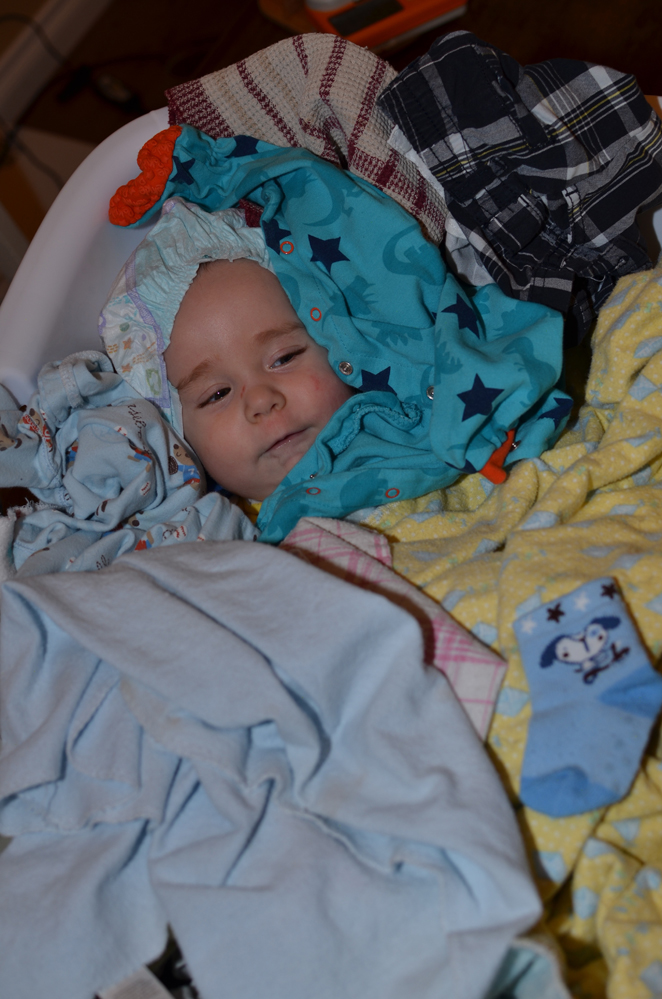 There is no question, the winter doldrums and cabin fever have struck in beautiful British Columbia. The promise of hardly any snow was smothered today. Smothered by the falling of large, fluffy, white snowflakes. What is happening with BC's weather? We Easterner's were promised cool summers and warm winters. The past two summers have been blazing hot with heat waves that, such as this past summer, caused Super DiaperHead Baby to cast off most of his costume and only wear his diaper. And not the one on his head! In fact, if he could get away with it he would wear even less than that. And winters? Snow today in BC yet well above zero in Ontario! Has the world gone mad? We have no answers for serious questions like that because Super DiaperHead Baby could care less about getting into a debate about weather, politics, or anything else. His task, to share his magic touch with everyone. To brighten their lives when they feel like they're stranded like an alien on a strange planet. When that happens, Super Diaperhead Baby is there in a heartbeat to reach out and touch you! To make you smile again. To make you realize that there is so much joy in life!

In everyday mode, Emmett does many things like every other baby does. Such as filling his diapers and peeing on stuff. As a result this creates a huge amount of laundry which must be washed, dried, and then folded. Of course, grandpa doesn't really do much of this but he was the only one willing to allow 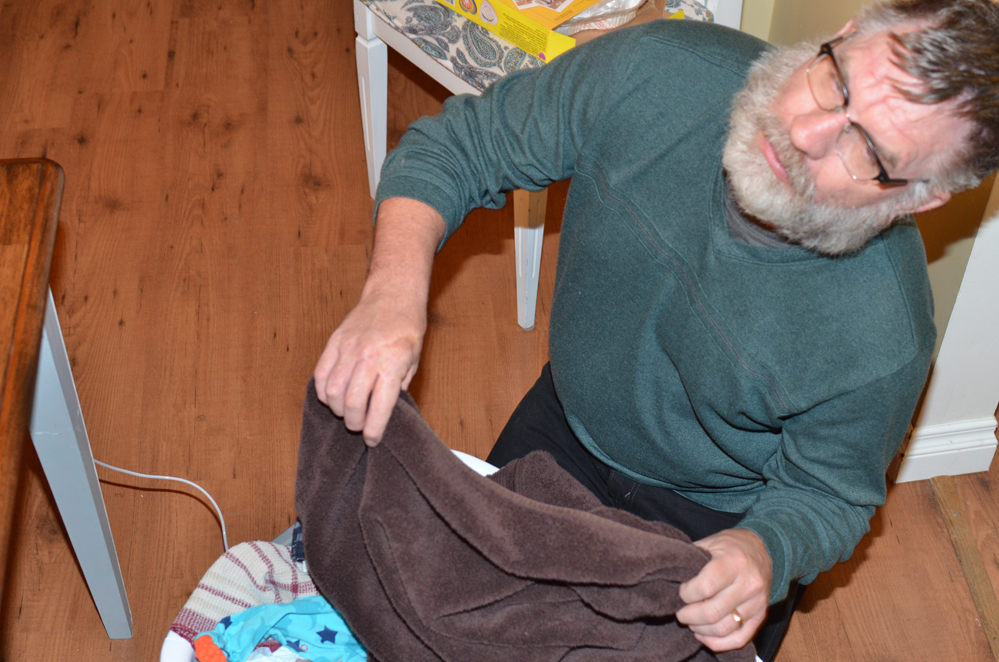 his photo to be taken. Emmett, of course, always wants his photo taken. So here in our made up story I'm dealing with the tedious and never ending chore of putting away clean laundry. Of course, I don't realize that Super DiaperHead Baby has snuck into the laundry basket. His sleeper cape was in the wash so he wasn't able to fly about, but somehow he got there! 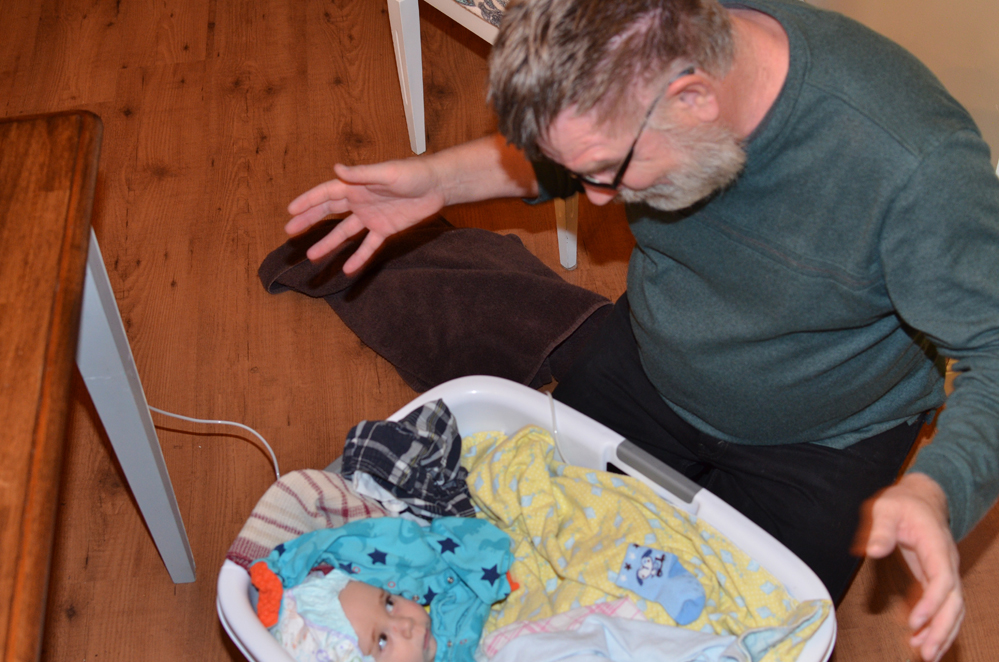 Of course, as soon as I found Super DiaperHead Baby then all of the challenges and frustration of doing laundry vanished as Super DiaperHead Baby's smile burst out of the laundry basket - with a few giggles that he had been able to surprise me. However, he was a little bit put out as his favourite sleeper/flying cape was not in this load. It was in the next which wouldn't be done until after his bedtime! 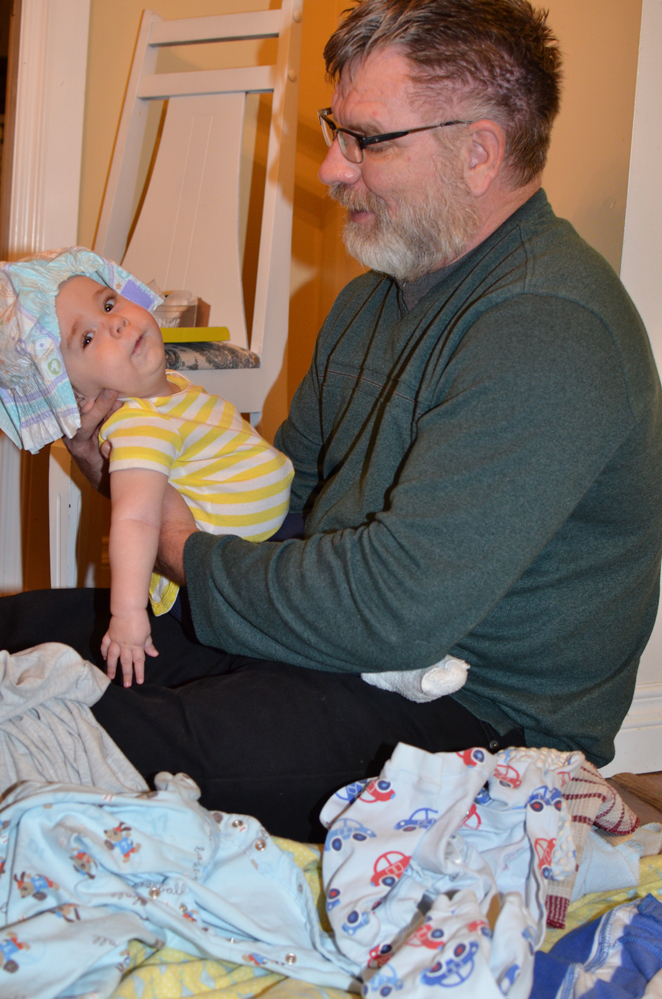 Bursting out of the laundry basket and scattering all of the nice and freshly laundered clothes all across the floor, Super DiaperHead baby made me giggle and laugh. And then we left the scene and probably grandma and mommy stayed behind to clean up the mess that we had made. It was time for Super DiaperHead Baby to revert back to his normal baby self, have a bath which he absolutely loves (on the other hand, Super DiaperHead Baby absolutely abhores water! It simply makes his costume look and feel horrible. His head becomes so heavy!), and then go to bed.

Stay tuned for the next episode - Super DiaperHead Baby Awakens!