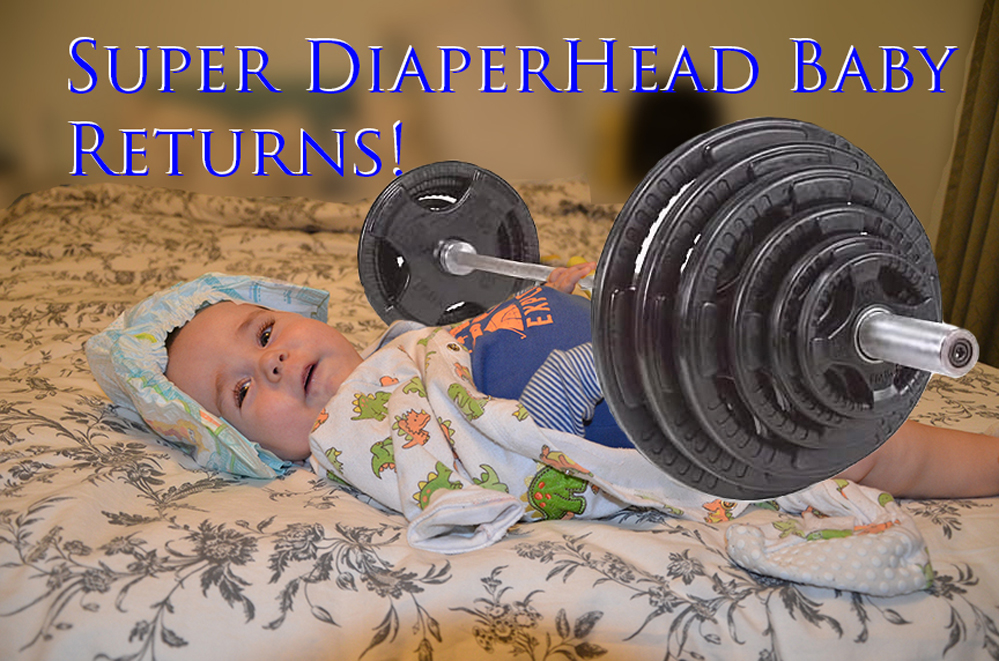 Super DiaperHead Baby was working out in his private lair in the mountains. Even heros like Super DiaperHead Baby have to exercise to stay in tip top shape. Super DiaperHead Baby finds that moving his arms about on a regular basis is a great way to exercise. He doesn't really need the weights, they're more to impress the ladies than anything else. Like every other superhero, Super DiaperHead baby is almost always surrounded by ladies when he's out and about.  Here, however, in the calm and quiet domain that is his private lair there is no audience around (except the photographer and paparazzi, of course)! Without his superhero costume, he's just like every other baby with SMA Type 1. But with the costume - the diaper on his head, sleepers buttoned around his neck but otherwise flowing in the wind, and no pants but his bottom fully covered by a diaper - Super DiaperHead Baby can do anything he or you could imagine. It was about this time that he got a message (was it telepathy? a beacon shaped-like-a-diaper beamed into the sky? or does he just have a really good mobile phone plan?) that his mommy was getting swamped by paperwork. 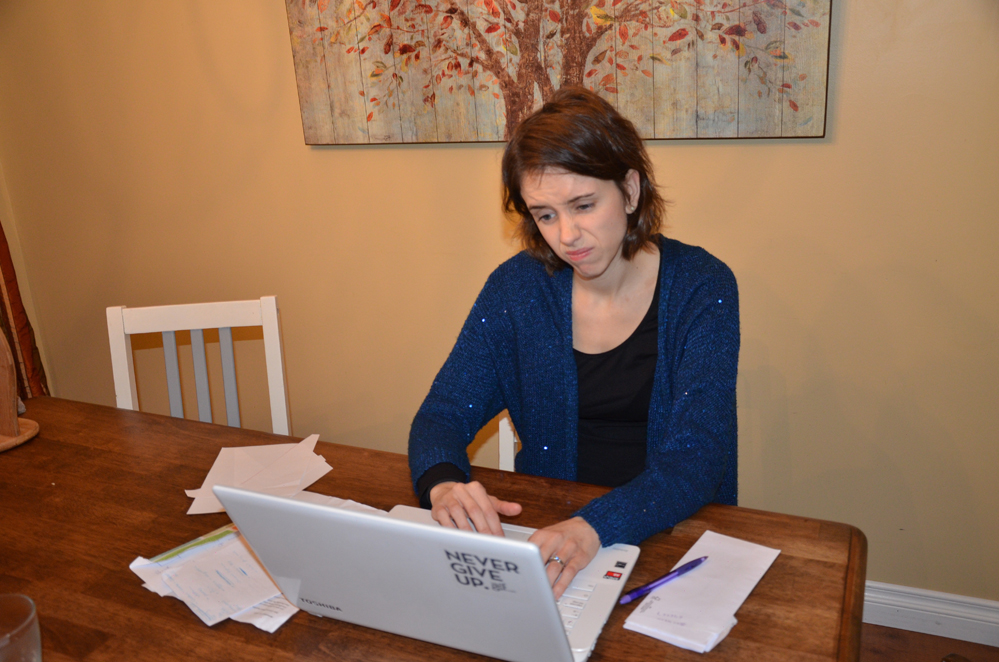 Sure enough, Super DiaperHead Baby was right on the money because, through the superhero technology he has in his superhero lair (that's secluded in the distant mountains) he could see the look of frustration on his mommy's face about all of the paperwork. He sensed that she was about to give up and that is not something that he could allow. Super DiaperHead Baby knew that part of the problem was that daddy had the MacBook and mommy was once again forced to use the Window's laptop. Which can be frustrating even without bills and stuff like that.

Tossing the weights aside like they weren't even there (and in actual fact, they weren't there. It was a foam bar that was about 30 cm long and Emmett can toss it easily). 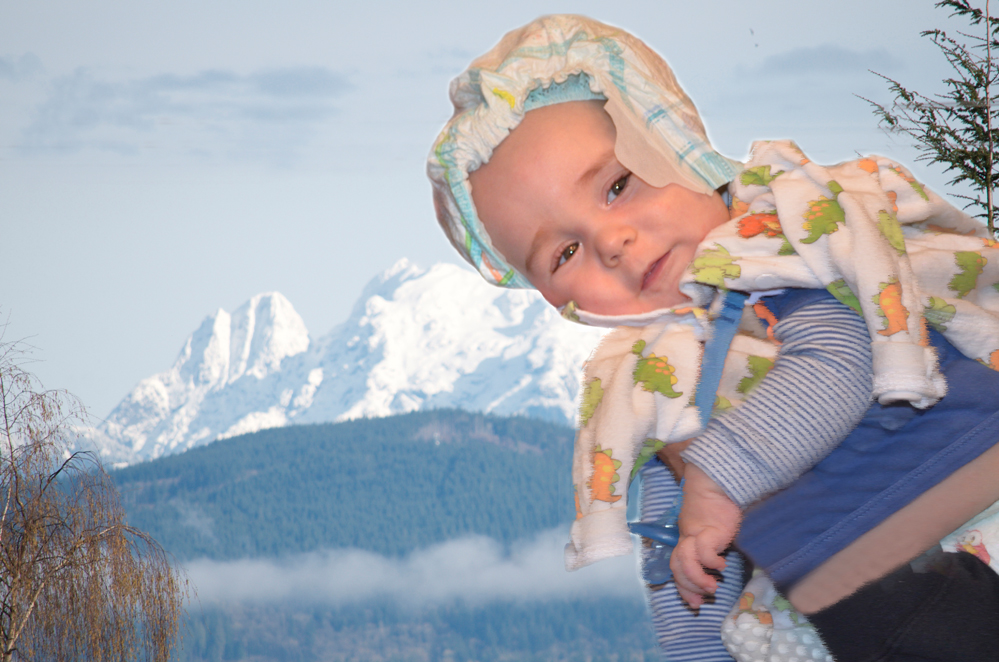 Blasting out of his secret lair, Super DiaperHead Baby flew around and over trees without even noticing the mountains surrounding him. He wasn't bothered by the weather or the music that was playing in the distance - although he prefers classical to hip hop or rap. Super DiaperHead Baby really doesn't appreciate rap at all. 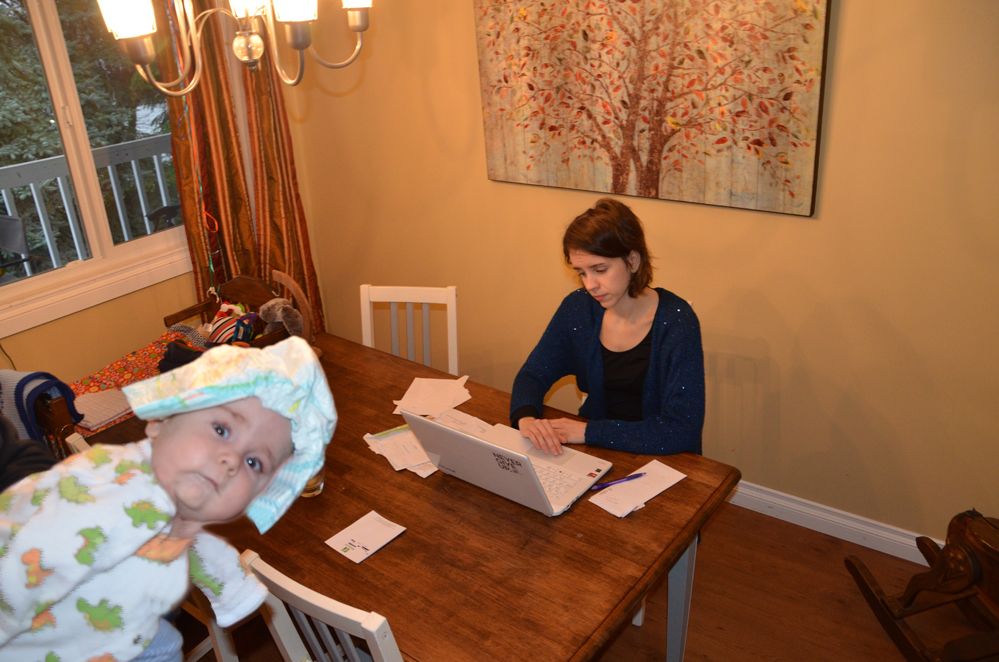 Of course, Super DiaperHead Baby was travelling so fast that mommy didn't see or hear him coming. She was still bemoaning the fact that the MacBook would have made life so much more bearable. Super DiaperHead Baby had some kind of guidance system because he truly never looked where he was going. Instead he was focused upon ensuring that his photographer captured his best side! Yet, in spite of not looking, he never crashed into anything - except maybe a helium balloon or two. 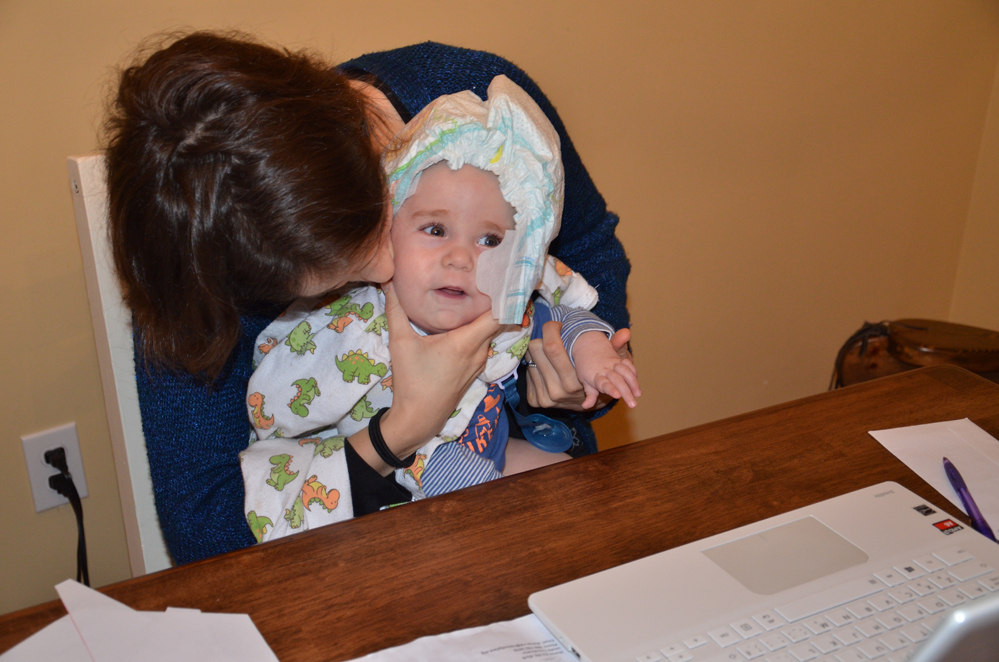 Super DiaperHead Baby's super power is causing everyone around him to forget their worries and concerns. Typically they are so caught up in enjoying being with Super DiaperHead Baby - giving him lots of cuddles and kisses - that they mess up his costume. But that is of no concern to Super DiaperHead Baby. He doesn't care what he looks like as long as he can make others smile and laugh. Which in turn makes him smile even more and, if you're really lucky, you'll get a small giggle out of him! This costume mishap, with the tab being out by his face, made Super DiaperHead Baby wonder if this would perhaps improve his aerodynamics while he's flying at super fast speeds? 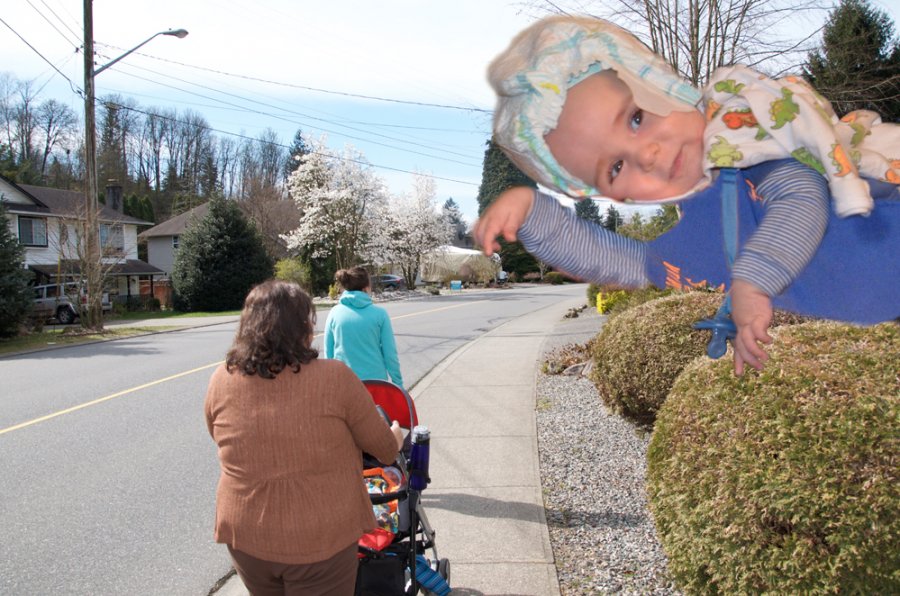 His eyes, how they twinkled. His dimples, how merry! His cheeks were like roses, his nose like a cherry! Don't be deceived because he's chubby and plump, he speaks not a word, but goes straight to work. With the diaper tab pushed a little bit back from his face, Super DiaperHead Baby's work was done. Laying his finger aside of his nose, and giving a nod (more like side to side, cause he cannot nod yet), up the chimney he rose and then, sleeper cape flowing in the wind, soother close by, and diaper planted handsomely on his head - off he flew back to his secret, secluded, and very distant lair in the mountains!

Thank you, Super DiaperHead Baby! Until the next time!

Super DiaperHead Baby has a wonderfully creative Grandpa! How delightful to share the fun. I can imagine Emmett was all smiles! We are praying for Super DiaperHead baby :-) and for all of you. Rebecca and John
Guest Comment 7 years ago
Site Visitor
+1

Thanks for sharing Emmet's journey with the church family - Precious little one!
Categories
Archives
/dailyweekly-thoughts.php
Site proudly sponsored by OSM | Powered By SiteApex