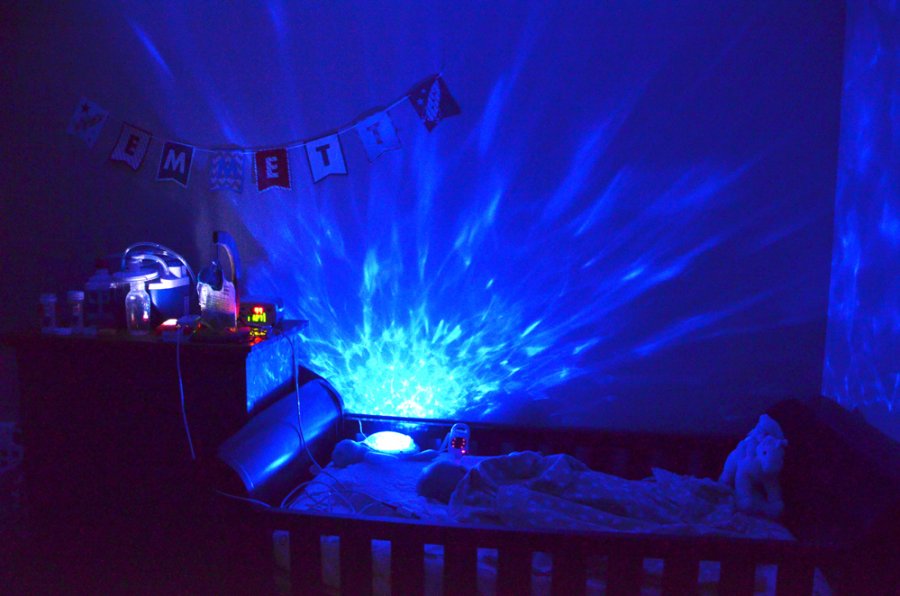 Emmett gave me a raspberry. And it startled me.

You know what a raspberry is - when you blow out air and bubbles through your lips and make a blubbering sound! Emmett was sound asleep while I finished filling his feeding bag with milk and reset the pump for the next 168 millilitres of fluid that would be pumped in. Then I rolled him on his back for a diaper change and, thinking I was fortunate as he hadn't awakened, I proceeded to change the diaper. And that's when he blew a raspberry at me! At 3:30 in the morning! So don't adjust your set - these photos are from the middle of the night and, if they look blue and dark, that is how they are supposed to look! The brilliant light is Emmett's night light turtle - this creates awesome patterns on the wall and ceiling for about 20 minutes - combined with soothing sounds - before automatically going off. 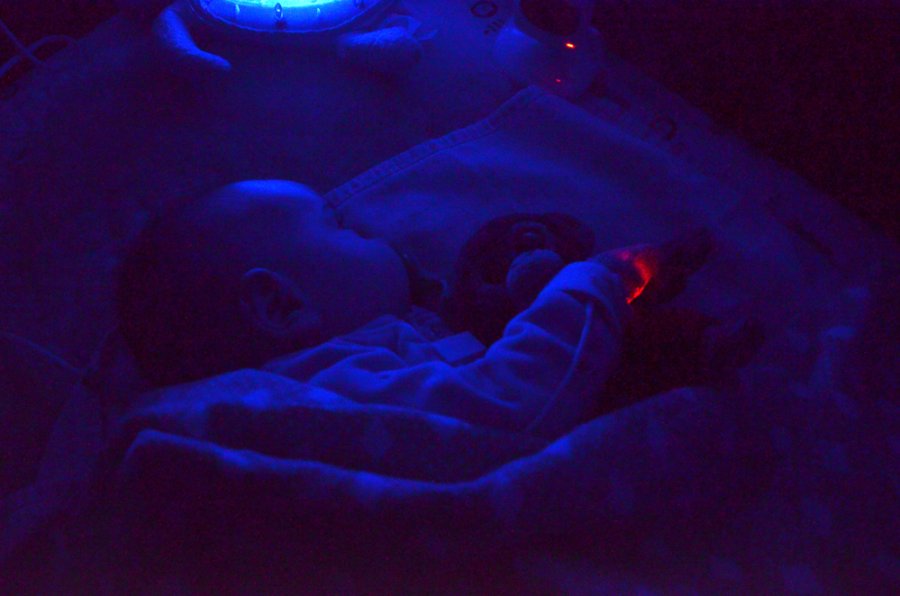 Just like that he had become a wide awake and alert little boy, and the best way he knew to tease and startle me was to blow a raspberry. I know he was teasing me because if he just wanted attention he would have used his voice. Raspberries are his way of communicating that he is happy and fooling around. With a sparkle in his eye, I could tell that the next move that he was considering was whether or not he should unleash a tsunami like flow of pee that would make Superman proud (speaking of Superman, how is it that no one has written about how many bathroom fixtures Superman destroyed while peeing? I mean, wouldn't the force have been beyond what mere mortal porcelain could withstand? But I digress - and yet hope someone answers that for me, someday.) Fortunately for me, the new diaper was right at hand and quickly taped into place. Once again, a fluid catastrophe had been diverted, all was once again safe, and Grandpa's record of not being pee'd upon is still spotless. 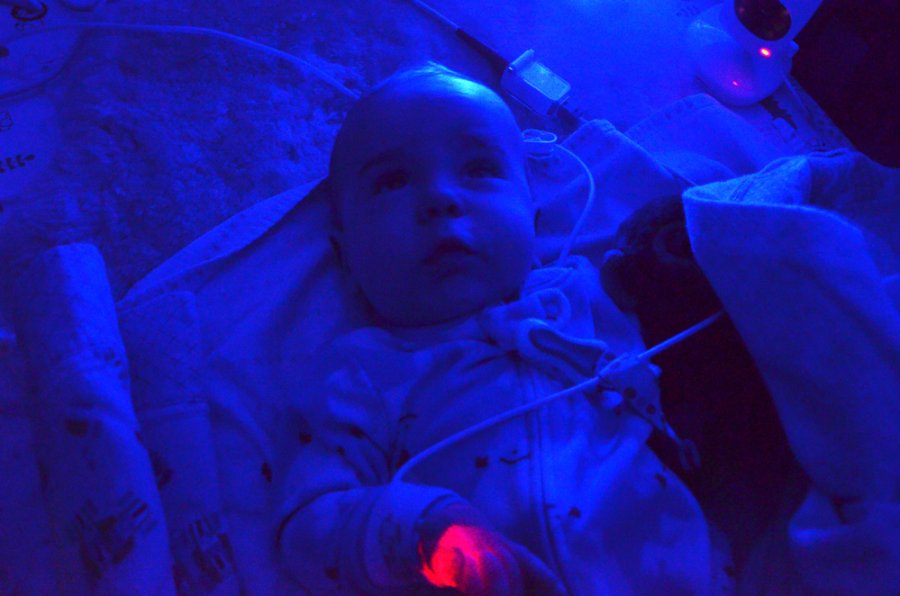 Alisha frequently manages to go through this 3:30 a.m. process without Emmett opening his eyes; me, I'm not sure what I'm doing differently but frequently Emmett wakes up and we get some early morning quality time. This morning he was really awake; what else to do but grab a camera and take some photographs. No flash was used so this is really as close as I can provide as to what Emmett sees between 3:30 and 4:30 in the morning. No selfies of me, because this camera is too large to hold and point at myself! And that would be too scary!

Emmett has two attachments overnight. The first, obviously, is his feeding tube, as he gets a slow feed throughout the night. No worries about needing a nighttime snack for this little one - everything is taken care of automatically. Of course, automatically means that at 11:30 p.m. and 3:30 a.m. someone replenishes the milk in his food bag. If that doesn't happen, the pump alarm goes off because there's no food available. 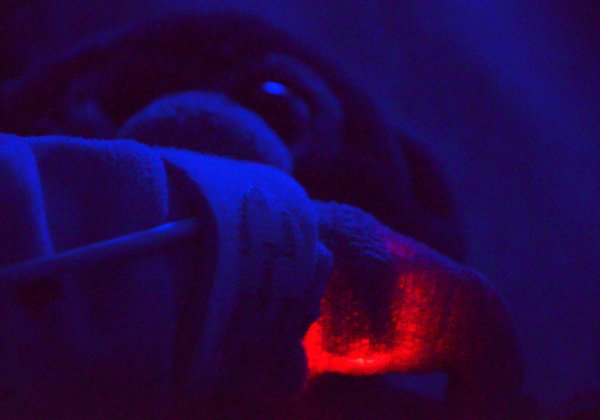 Or if you're late getting there, the pump alarm will sound because the set allocation has been pumped and a big person has to reset and restart it. No raspberries from Emmett when this happens - he can and does sleep right through these alarms. Then around 7:30 a.m. the overnight meal finishes and the pump must be turned off and the tubing disconnected. Then it is free time as his next session will be Emmett's 9 a.m. breakfast.

The second attachment is the Oximeter. Attached to a thumb or a toe - maybe a palm or a foot (the later two actually work better) - this monitors Emmett's oxygen levels and his heart rate. You'll see it in the pictures as a glowing red attachment on his hand. If the oxygen level drops below 92 an alarm - at least double in volume of the food pump's alert - sounds and everyone nearby jumps. This alarm could mean that breathing has stopped - so all adults in the vincinity have their own breathing stop while rushing to check on Emmett. So far it is always a false alarm. Medical opinion is that most likely the false alarms are caused by movement - and so it is not something to worry about. Regardless, even though the alert sounds at least once every night there is no way to get used to it! As startling as this machine can be, it is a God send. Otherwise you're constantly on edge wondering if he's breathing or not. Most monitors on the marketplace don't work for a baby that has limited movement. This is a hospital grade machine. Before we knew it was coming we ordered an Owlet monitor which is a consumer device that became available on October 1 and were quite excited about; it's design and sensitivity should have worked well with Emmett. We have returned it as we no longer need it (the hospital Oximeter arrived the last week of September), but when you have a medically fragile child you need the peace of mind that this equipment can bring. And you live with the startling alarm. 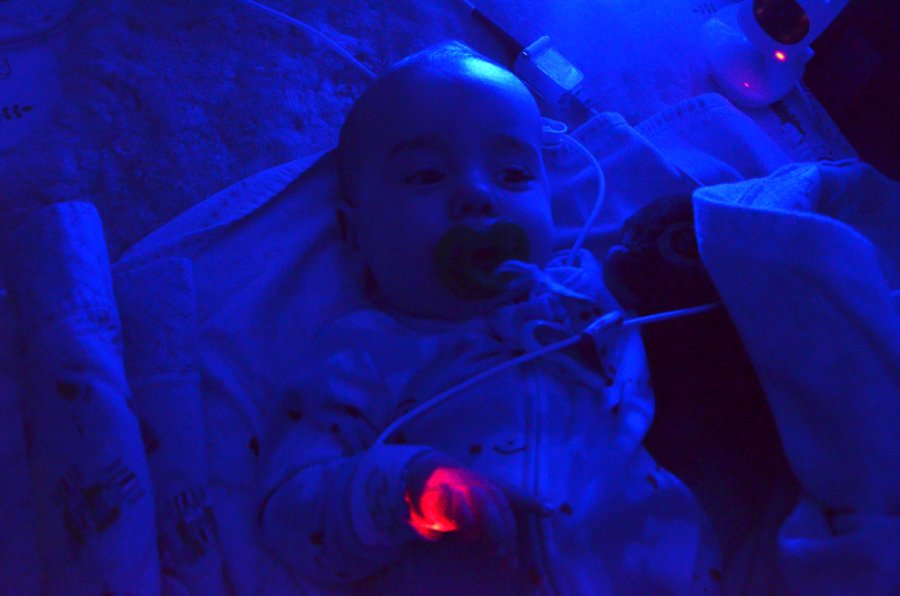 Tonight is not a night of alarms. It's a night of a little boy who is awake and wants to grin and have fun. Of course, we have to play quietly because the night vision baby monitor has a great microphone and, if we're too loud, we will wake up Alisha. If we're really loud, we'll wake up Josh. So far we haven't disturbed Josh! And Emmett knows that I've got a camera! He recognizes the shutter click and, I think, wakes up a little bit more so that he can be sure that I get his best side. We didn't really play apart from making faces at each other - this was a time to cuddle and put him back to sleep.

This is a time when I pray with and for Emmett. It's easier, for some reason, in the early morning hours rather than in daylight. Maybe I'm too negative in the daytime. Too angry. Too hurt. I try not to be but I'd be lying to say I'm not. Just like Alisha and Josh are strong for Emmett, Rhonda, Roger, Pam and I have to be strong 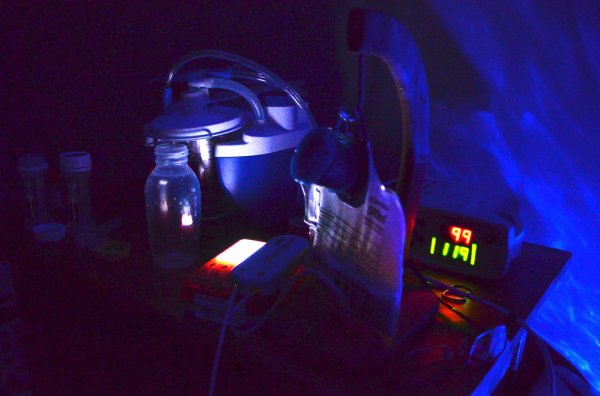 for them. That doesn't mean we cannot share our feelings - we have to. And it's easier for me to pray in the middle of the night. Seriously, though, all of that negativity fades when you spend time with Emmett and his outlook on life - so sunny, positive, and optimistic - literally pushes all of the gloominess away.

I know you're wondering about the trial that Emmett is involved in. Believe me, we are wondering about this experimental drug treatment also. As we have mentioned already, it is a blind study. Emmett could be on a placebo, could be on the drug - but it will be months before we know. 14 months from start to finish. That doesn't stop us from looking and wondering if we are seeing a reversal of the weakening that has been so obvious in Emmett's little body. Wondering if the wrist movement that we're seeing is more active than before - in fact, hadn't he stopped moving his wrists for a while? Moving his fingers in his sleep - he was just doing that five minutes ago. Usually in his sleep he doesn't move a muscle - except for sucking on his soother. Oh dear, what would we do without his soother. 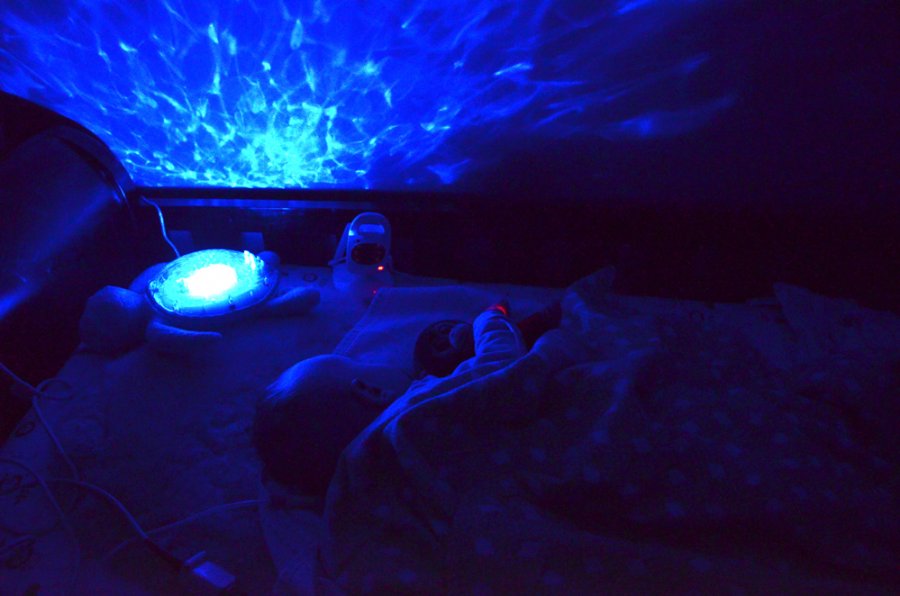 I have no idea how many Alisha and Josh have bought, but I'm positive that whenever they see this brand they get another one. It's the only soother Emmett will allow in his mouth - and he loves it. Way more than he loves his helium balloons, which he does seem to be moving more energetically than a couple of weeks ago. His grip also seems to be much stronger than it was. Is this evidence of regeneration of nerves? Is he getting the real drug and not a placebo? Is he just in a good spot? Are we just looking for signs!

Of course we are. But here's the thing, we think we are seeing them! Little things that are quite hard to gauge. Time. Time will tell. Time is why Emmett is going through this trial process - because Alisha and Josh want more time with Emmett. We all do.

I love your writing, Frank! Thank you for all the updates. xo CA
Guest Comment 7 years ago
Site Visitor
+1

Thanks for your honesty Frank. Laughing and I'm tearing up! We love you! Praying for your little grandson! Love Janice XO
Guest Comment 7 years ago
Site Visitor
+1

That was beautiful, Frank. So touching and honest and loving. Every baby is precious, and Jesus loves them all. Cousin Sheryl
Categories
Archives
/dailyweekly-thoughts.php
Site proudly sponsored by OSM | Powered By SiteApex