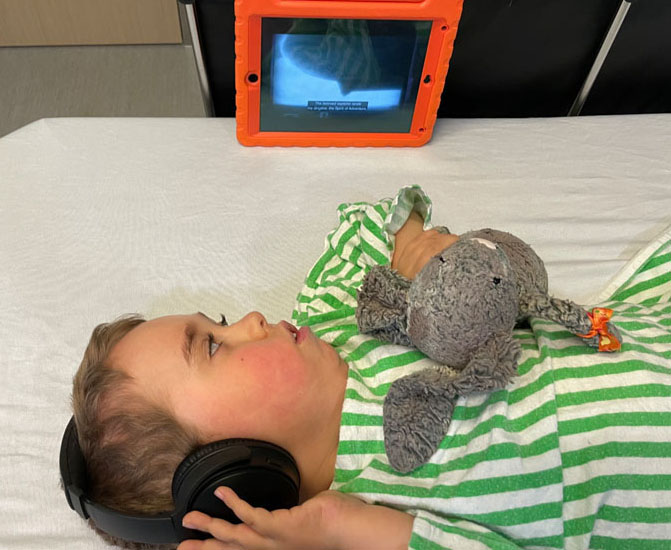 Did you know that Emmett was one of the first individuals in Canada to receive the drug that is now known as Spinraza? You do know that if you've been following along from the beginning of the blog, but if you've just recently started following then this could be news to you. Today, October 19th, Emmett had his 28th "POKE"! That is right, his 28th lumbar puncture. What is a milestone about this lumbar puncture that took place yesterday is that the the drug trial with Biogen, the pharmaceutical company that owns Spinraza, which is also known at nusinersen, has come to a close. For seven years Emmett has been part of this ongoing worldwide study. Before you jump to conclusions, Emmett will continue to receive the drug and require lumbar punctures every four months but from this point on it will be conducted under B.C.'s publicly funded health care system. What a journey it has been since 2015 when Emmett was first admitted to the experimental drug trial where he was 1 of 124 infants worldwide to participate in this blind study, in which only 2/3's of the participants actually got the drug. At that time Spinraza was known as SMNrx and the company that developed it was ISIS pharmaceutical (later renamed Ionis Pharmaceuticals) which has had a long partnership with Biogen. Emmett was fortunate that he was one of the youngsters getting the drug (and not a placebo) starting in October 2015 when he was seven months old.

Every four months he gets this injection of Spinraza which is like an injection of power juice that allows a secondary path to carry his brain's commands to his muscles. You see, Spinal Muscular Atrophy causes an issue with the nervous system and not the muscles themselves. The muscles atrophy because they do not receive messages from the brain. 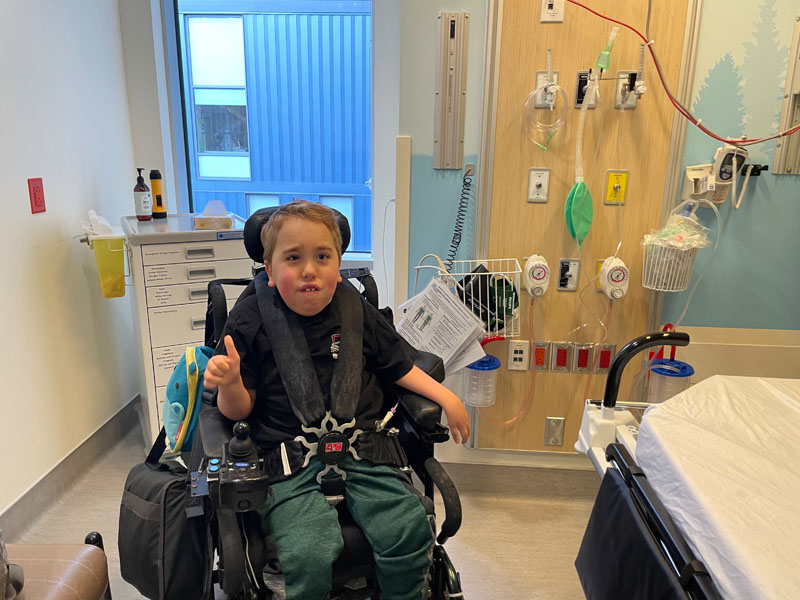 Spinal Muscular Atrophy Type 1 first made itself evident in Emmett quite early on - as a newborn he was able to kick his legs and move his arms quite well. By three months he had lost the use of his legs. By six months he had lost the use of 95% of his arms. Between five and seven months he began to demonstrate signs that he was losing the ability to swallow. He got a G-Tube to allow tube feeding. His breathing was compromised so he got a Bi-Pap Machine to assist as it supports his breathing in and out (a C-Pap machine only pushes air in, the Bi-Pap is a two way air flow). Spinal Muscular Atrophy affects all muscles - except the heart.

Spinraza was the first drug (there are now more) that was approved to treat Spinal Muscular Atrophy. The intent of the drug was to stop the regression of this devastating genetic disease but in Emmett's case (and many others) it has actually reversed the effects of the disease. And today's procedure went perfectly and Emmett is back home sleeping in his own bed.

During the drug trial the infants were older and had to be a specific weight to be accepted - Emmett fortunately fit all of the requirements. Today, if the disease is caught early enough intervention can begin almost immediately. As of September 30th, 2022 BC has begun newborn screening for SMA along with 26 other treatable conditions. This is fabulous news and we have been advocating for  BC to include this screening test. 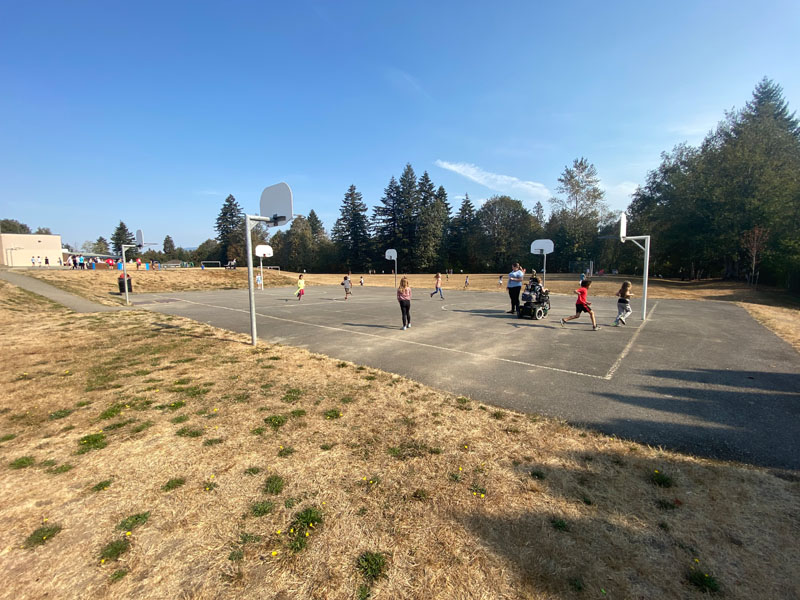 You've been asking what Emmett has been up to recently, and the huge step for the Willm's family is that Emmett is attending Grade 2 at his local public school. After Distance Education at home for Kindergarten and Grade 1, last February Emmett announced that he was ready for public school. He loves being at school and, as you can imagine, has picked up all kinds of things. Playing tag with his classmates, reading with his buddies, participating in the Terry Fox Run, getting colds/flu/stomach bugs! It has been chaotic and exciting all at the same time. In addition to EA support while at school, Emmett also has nursing support to accommodate his medical requirements. It sounds like his support team got quite a workout during the Terry Fox Run. Emmett's power chair got a workout too - it required a full service to lube up the wheels, axles, and hubs after the intense used he's put it through this fall. 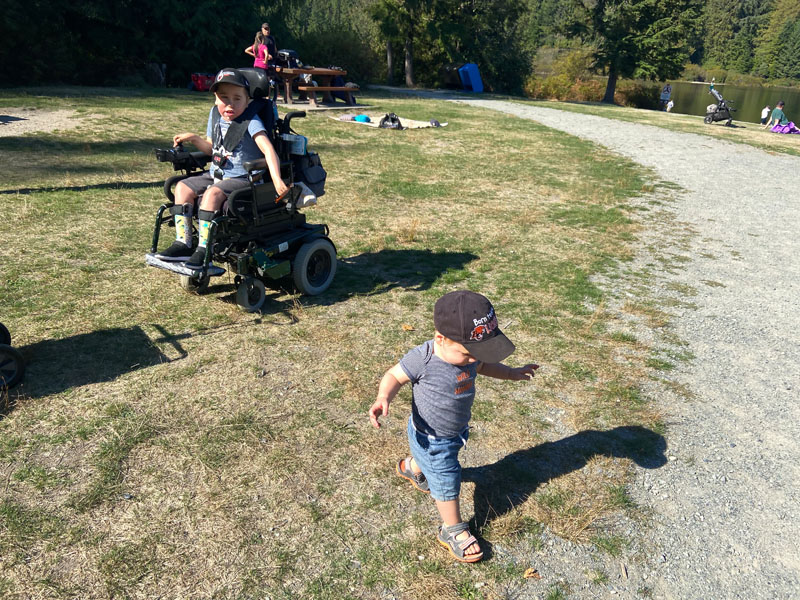 In early October we had our regular guys (Emmett, daddy, and grandpa) camping trip and thanks to the drought that BC is experiencing we had our first ever rain-free guys camping experience. It was unbelievable. Campfires, BBQs, games, hikes, stories, and also Theodore, mommy, and grandma came up to the lake to have picnics with us at the beginning and end of our excursion.

Emmett is continuing hippotherapy - you'll remember that this is horse therapy - this year and once again Fiona is his trusty steed. Other sessions for Emmett include speech, physio, and occupational therapy.  Emmett has started reading chapter books on his own and his current favourite series is Mercy Watson: Adventures of a Porcine Wonder. He also loves being read to and recent books include Watership Down, Call of the Wild, Hatchett, Lord of the Rings, and Tom Sawyer. This boy loves books. 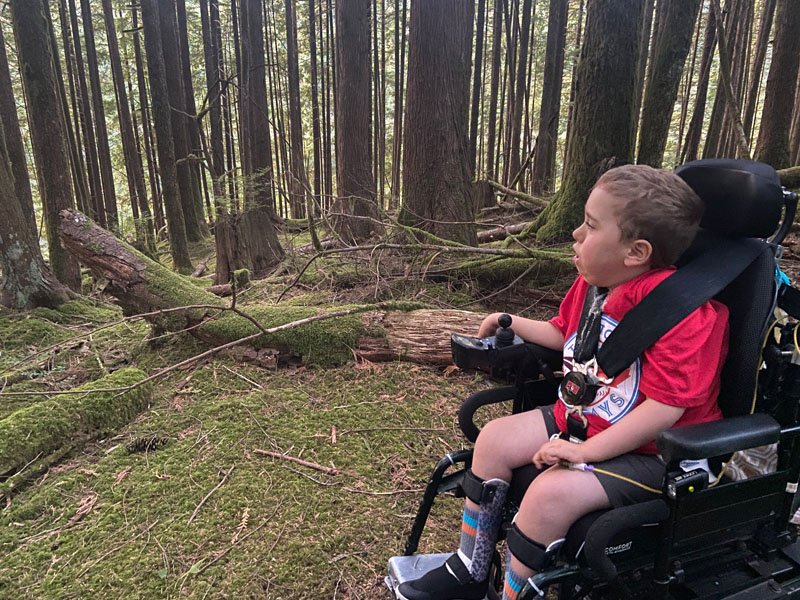 Life hasn't been perfect. Like any little kid in school Emmett has gotten colds and stomach bugs - it just hits him harder. And he gives it to his little brother and then they trade germs for a while. Unlike his classmates who might cheer when they hear that they have a sick day and miss school, Emmett is very upset about missing any school time. Also, his treasured orange power chair has been in the shop for service for over two months. Of course, the failure happened literally days after the warranty expired and while we are hopeful that it is fixed soon, no timeline has been provided. Fortunately, we have taken the old but reliable power chair that we use for his power chair soccer events so he is still mobile. Also, he has his "Purple Chair", which is his manual wheel chair that Theodore loves and has just figured out how to climb into on his own. The challenge with the purple chair is that Emmett has grown so much in the last six months that he's outgrown it! The chair company has a 'growth kit' for the chair but Emmett has been waiting over 6 months for that to arrive. His hopes were raised in July when they came with parts to expand the chair - but the expansion kit was missing multiple key parts so he's still using his too small purple chair. 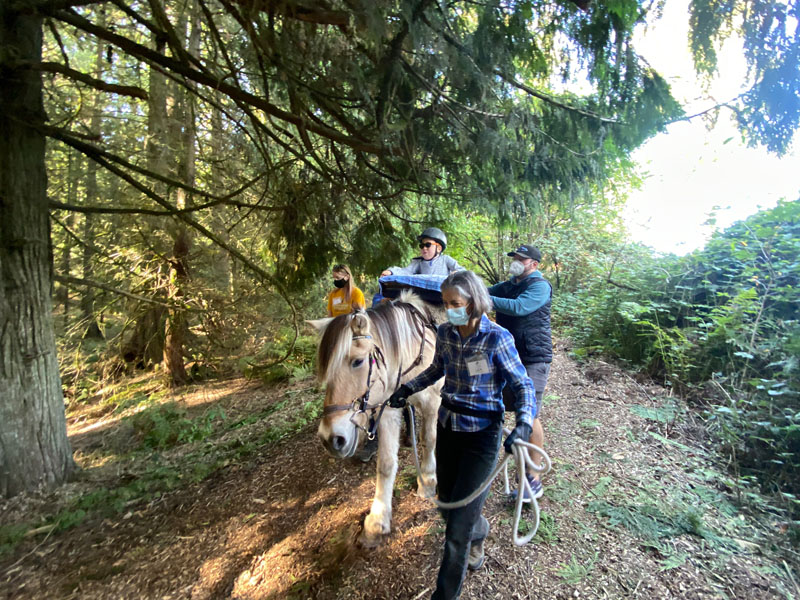 Oh, and just before school we got permission to go out onto the race track in my race car - Emmett loves watching me racing and this time he got to actually experience it!