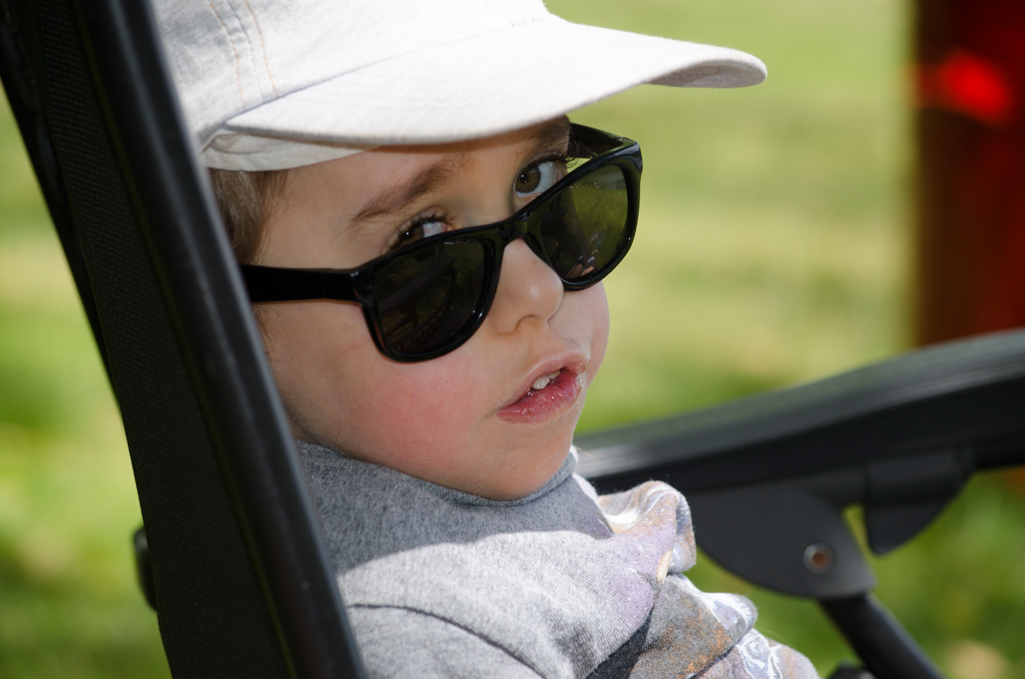 July 9th Update: Emmett is back home. The procedure went well. It is a tough day with a lot of anxious moments - because Emmett knows everything there is to know about lumbar punctures. This was his 18th lumbar puncture - they'll be happening every four months for life, unless a new method or a new drug is discovered. Emmett wants you to know that he does like going to sleep when this happens.

Every four months Emmett receives a lumbar puncture where a tiny amount of spinal fluid is removed and a tiny amount of Spinraza is injected. This is the drug that has reinvigorated the pathways in his spinal column so that his brain can talk to his muscles. So that messages like, "Hey, swallow now!" and "Emmett, hold your head up!" or "Reach out and turn the page of that book!" get through. And Emmett does it. It is a miracle drug - a miracle that requires a huge amount of work. Recently on Canadian news there have been reports about kids' parents seeking funding for a gene therapy treatment. A one time treatment - but it is only for children under the age of two and only in Canada under unique circumstances. Health Canada hasn't approved it yet. Obviously, not something that is available to Emmett. We are, however, so thankful for the drug that is available. The healthcare system that is helping him. And Spinraza is an amazing miracle drug that is absolutely working for Emmett.

So this week, Wednesday July 8th, Emmett will be getting a lumbar puncture and for the first time Emmett will be anethesized prior to the procedure starting. Yes, that does mean that he has been awake and alert for every other lumbar puncture, however, for the last one he was anethesized part way through. You can appreciate that Emmett is quite looking forward to "falling asleep in the middle of the day!". This is something that this five year old simply doesn't do any more.

Four months is not a long time, but four months ago when Emmett had his last lumbar puncture the world was a different place. There was a virus overseas but nobody on this side of the ocean was really in a panic, it was just a concerning situation. Emmett was Abbotsford's Police Chief for a day. Then in the intervening time everyone was suddenly welcomed into a version of Emmett's world. Sanitize! Wash your hands! Social Distancing! Don't go to the grocery store! Stay away from anyone who has a cough! On and on it goes - a new daily plan for everyone. Schools closed. Work places closed. Everyone's life became a closer version of what Emmett has been living since he was six months old. There have been changes for Emmett too. Tough changes. 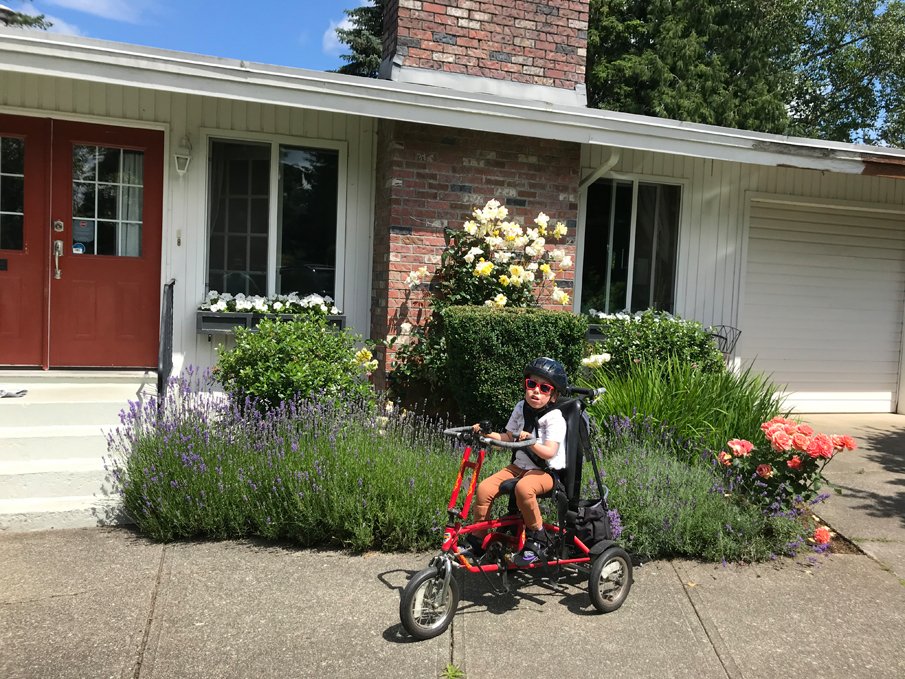 His family bubble was instantly closed up. Family members who were still working were not able to be inside his social bubble. The rare visits meant being on opposite sides of the yard. Video conferencing became the main stay of story time and more. Physiotherapy via video conferences? Yup. Speech Therapy - hmm, curiously Emmett doesn't hear from them much. Occupational therapy - absolutely. In fact, there have been days when Emmett has been booked for 2 and 3 video conferencing meetings. So incredible. Pam and I have stayed in that family bubble - we're not working outside of the home. We're not going into grocery stores. We are extreme social distancers - if that is even a word.

Yet it is the start of summer, so when BC opened their provincial park system we logged in and booked a campsite for the five of us. Emmett had already agreed that he was ready for something new. Alice Lake has been a spring go-to place. It has cell phone service. Electricity. And the road ways are paved. It is ideal for camping and it was not even an hour away from BC Children's Hospital. Emmett and his family have camped at Rolley Lake and loved it. We've done day trips to Golden 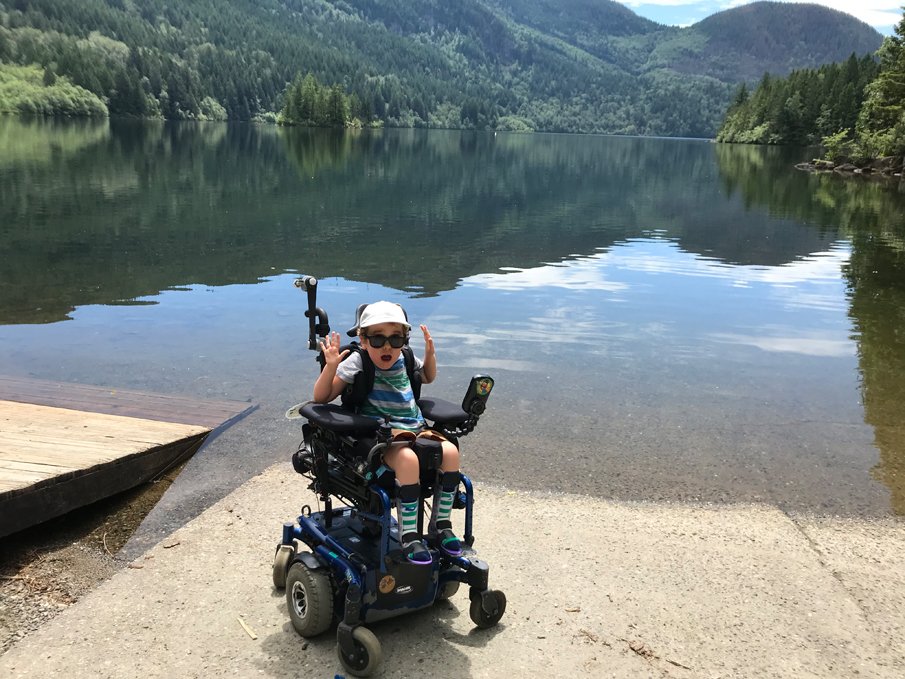 Ears. But this year was going to be a stretch - we booked a few nights at Sasquatch Provincial Park. It is about 10 minutes drive outside of cell access. There is no electricity (don't worry, our RV has been fitted with a small inverter that can power all of Emmett's medical equipment). And it is the furthest that Emmett has been from BC Children's since he was five months old. Emmett and Grandpa were up for it; everyone else was optimistic with a large side of anxiety.

We choose provincial parks for two reasons. First off is that they are large and spacious sites with plenty of room for Emmett and us to roam without bumping into someone at a neighbouring campsite. Second, with a medical note children and their parents get the base campsite rental free. This is a huge bonus for a family that is always challenged by the expenses that sometimes never end as you accommodate someone with medical requirements. The large sites also typically mean that there is a lot of trees, birds, and nature trails to explore. You can believe that the power chair batteries were fully charged and that the WeCarryKevan backpack was ready to go.

Emmett was so excited - just seeing the RV arrive in his driveway brought on a fantastic response. The morning that we we heading out, Emmett played on his own all morning while his mom and dad packed. Emmett is a great little boy but it is very rare that he will spend that amount of time without insisting that someone play with him. Once at Sasquatch Provincial Park Emmett wanted to do it all. He wanted a campfire. S'mores. Roasted marshmallows. Hot Dogs. Swimming time. Fishing. Playing at the beach. Going for a hike. And he did it all and then some. 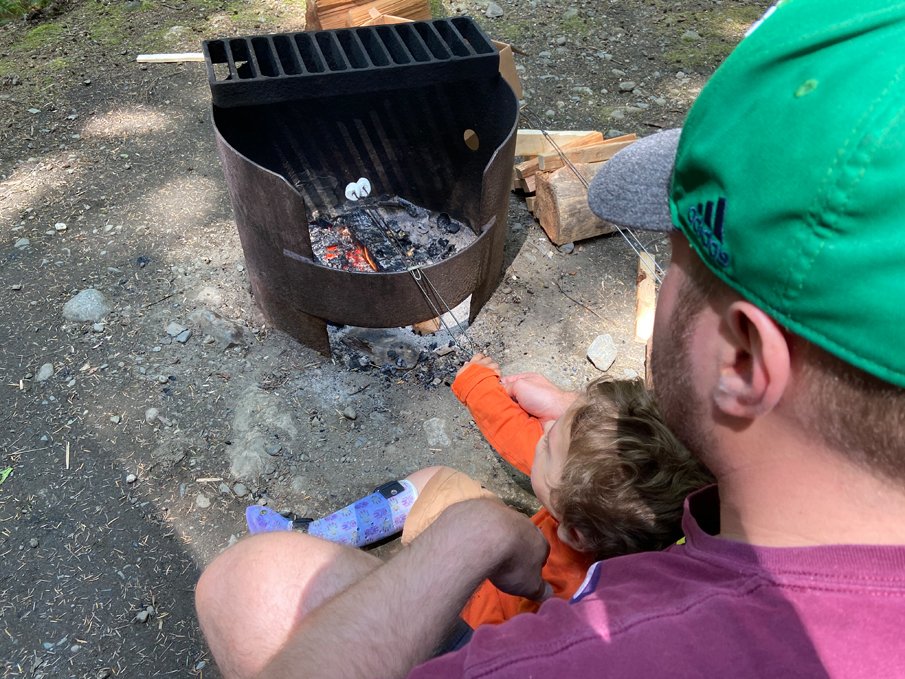 This camping trip was fantastic. And it will give Emmett great memories to dwell on while he is undergoing procedures that he doesn't enjoy at the hospital. We do have to say that the hospital is still one of Emmett's favourite places. There are so many people who know him there. His friends. There's staying overnight at Canuck Place - another fabulous group of people who go out of their way to support and assist Emmett and his parents. Thank you for supporting Emmett. You can send him a message on FaceBook through his parents - or his grandparents. This lumbar puncture is a tough go - but Emmett is even tougher! Literally, the strongest and toughest boy we know.

And now for some photos: 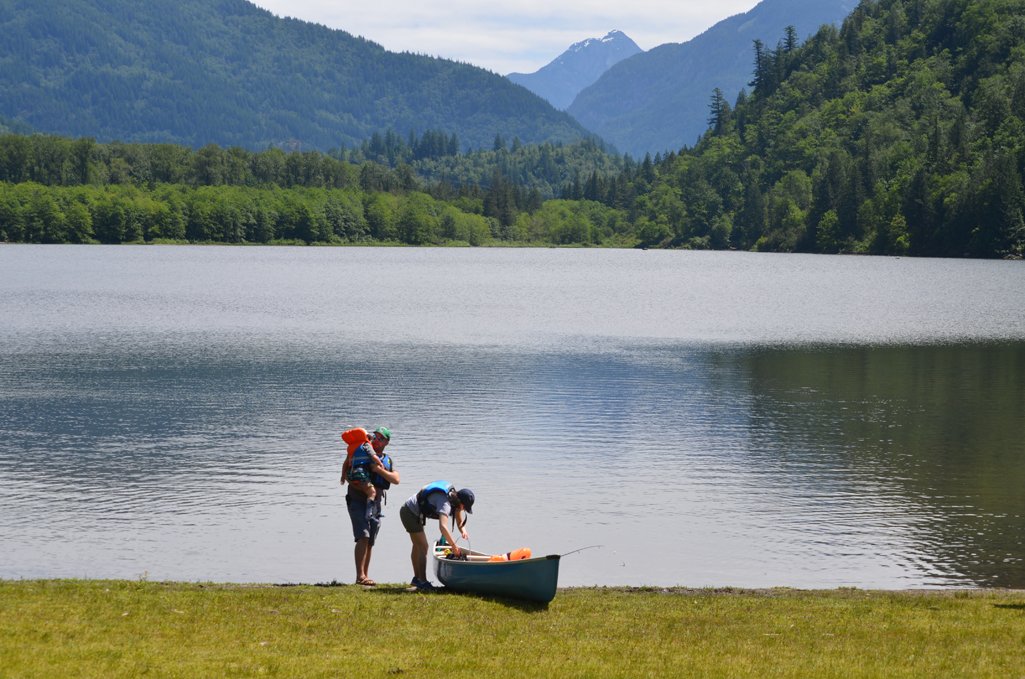 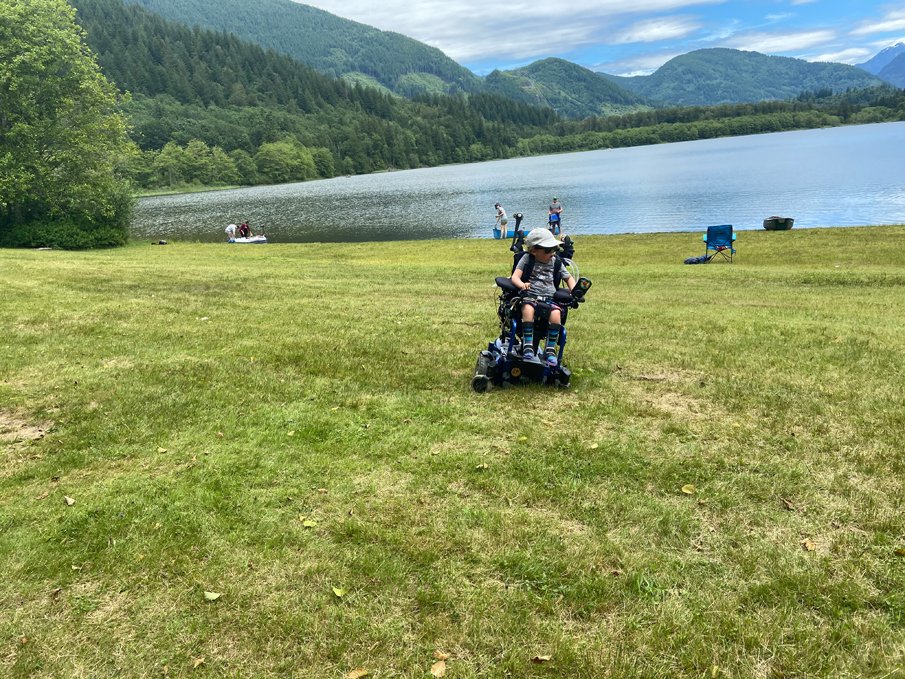 Deer Lake is one of the lakes in Sasquatch Provincial Park. It's a beautiful park. However, Emmett found a pothole with his powerchair and he got stuck! Fortunately, we didn't need to call in a tow truck. 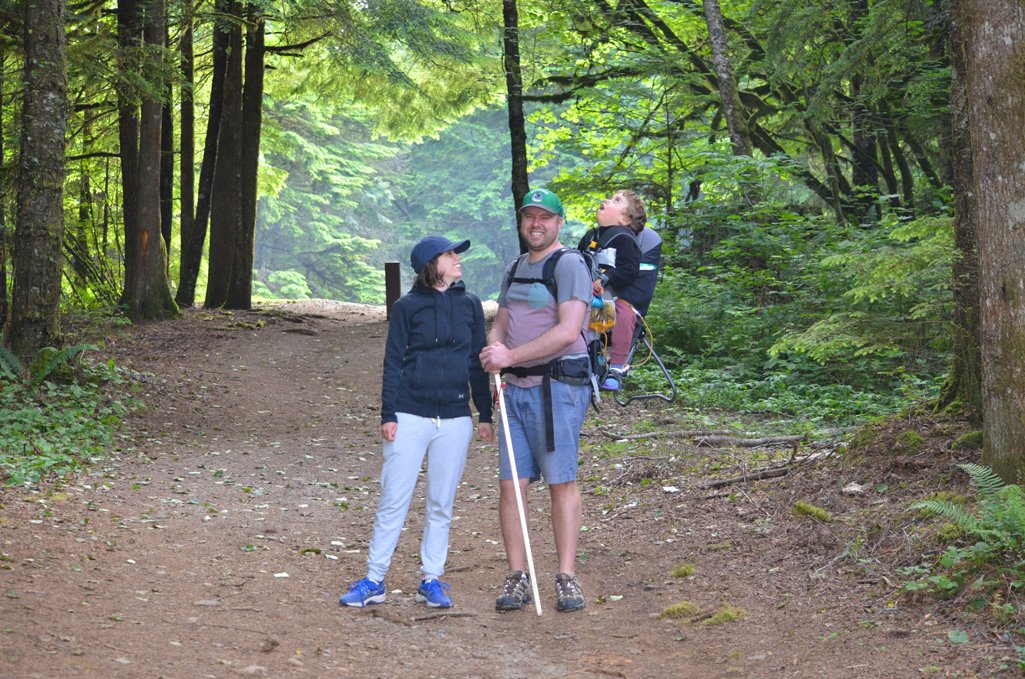 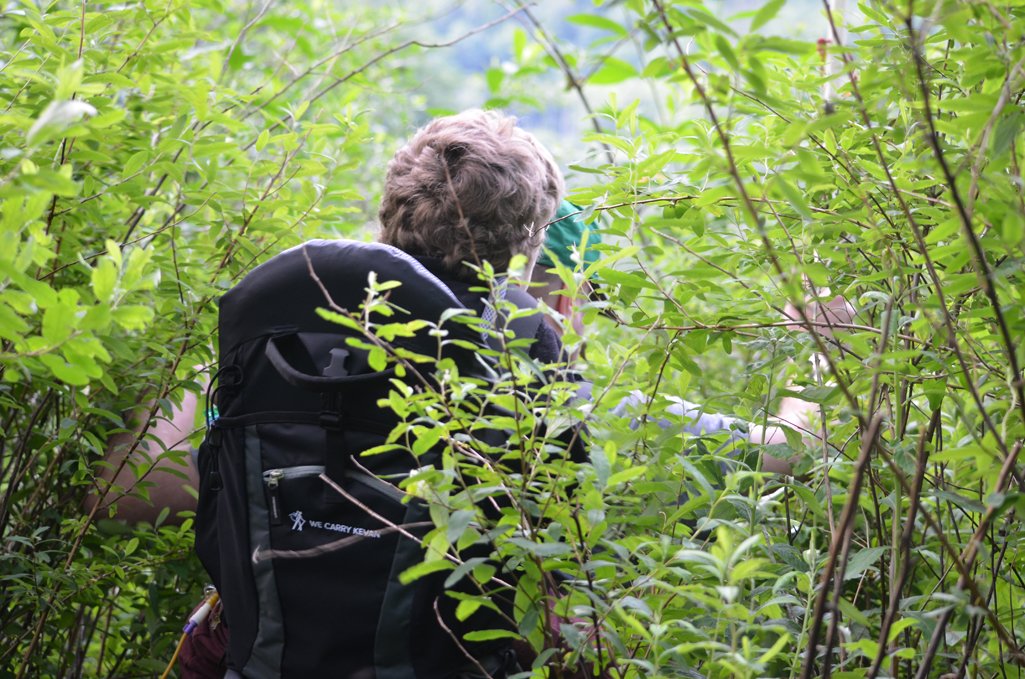 The WeCarryKevan backpack was certainly put to use - and not just for wide trails. This backpack is made for going deep into the forest (so far that means within metres of the main trail!) which is so much fun for Emmett. 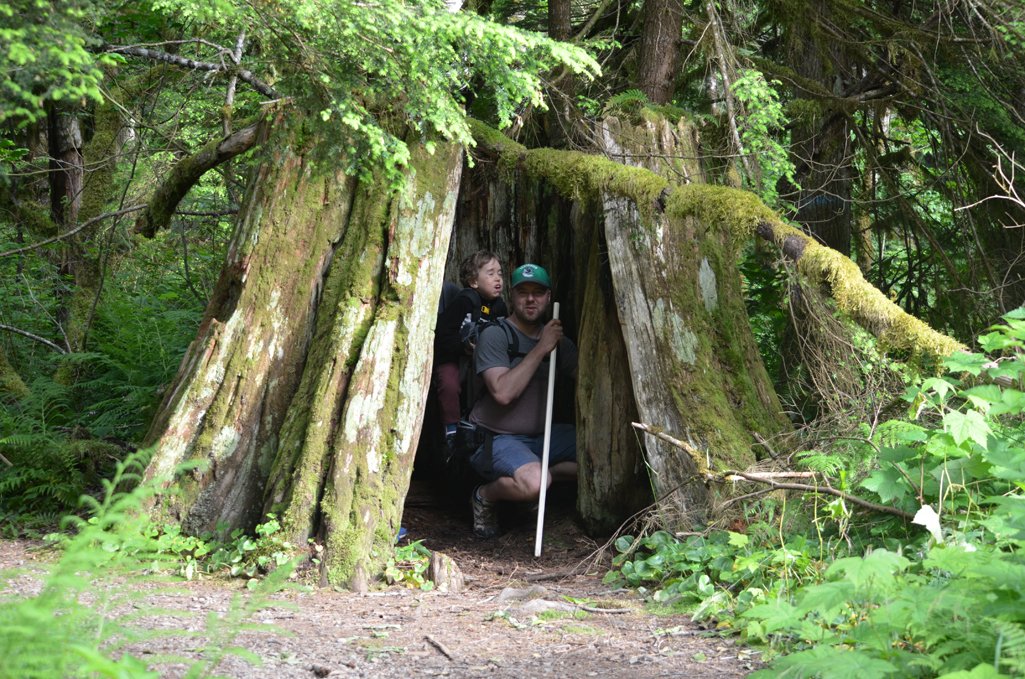 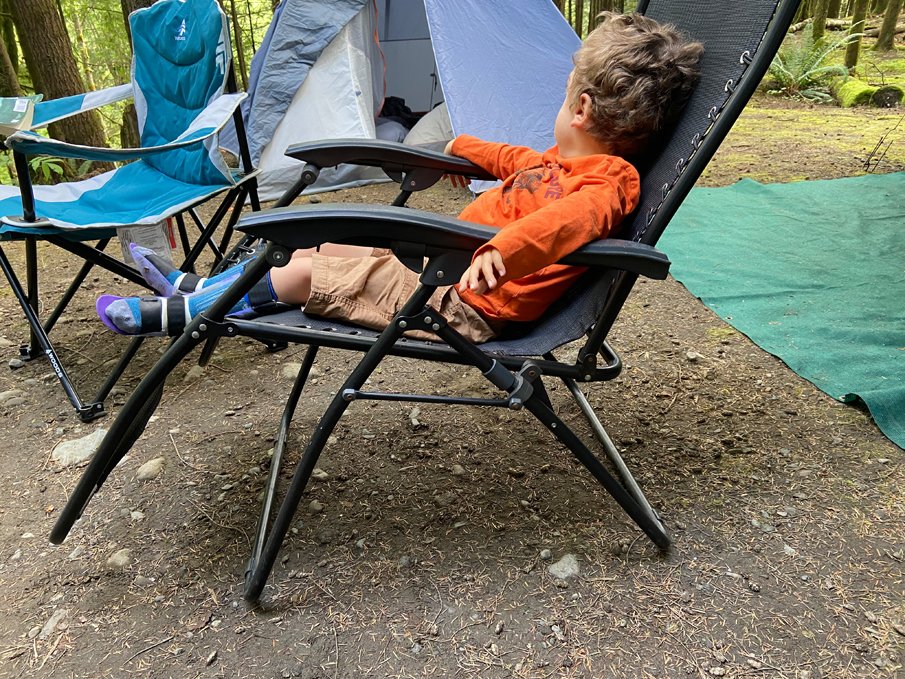 We found Eeyore's House! It is always exciting when we find Eeyore's house. Emmett loves his Winnie the Pooh stuffies - and when Emmett is on a hike he is always keeping his eyes open for Eeyore's house. After a hike there is nothing as relaxing as lounging near a campfire. 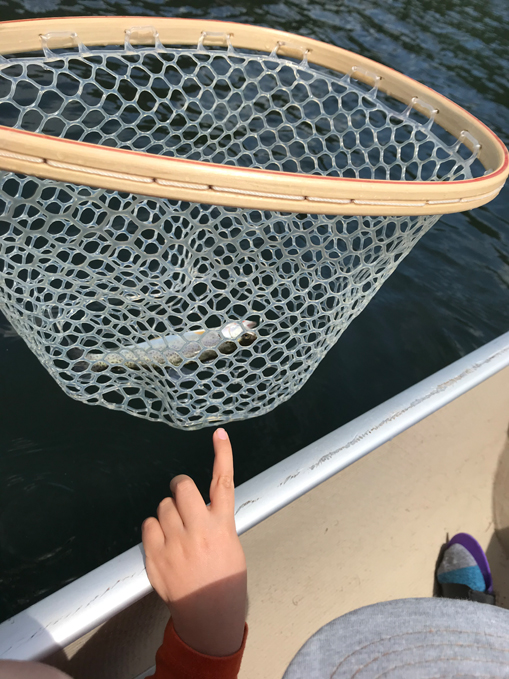 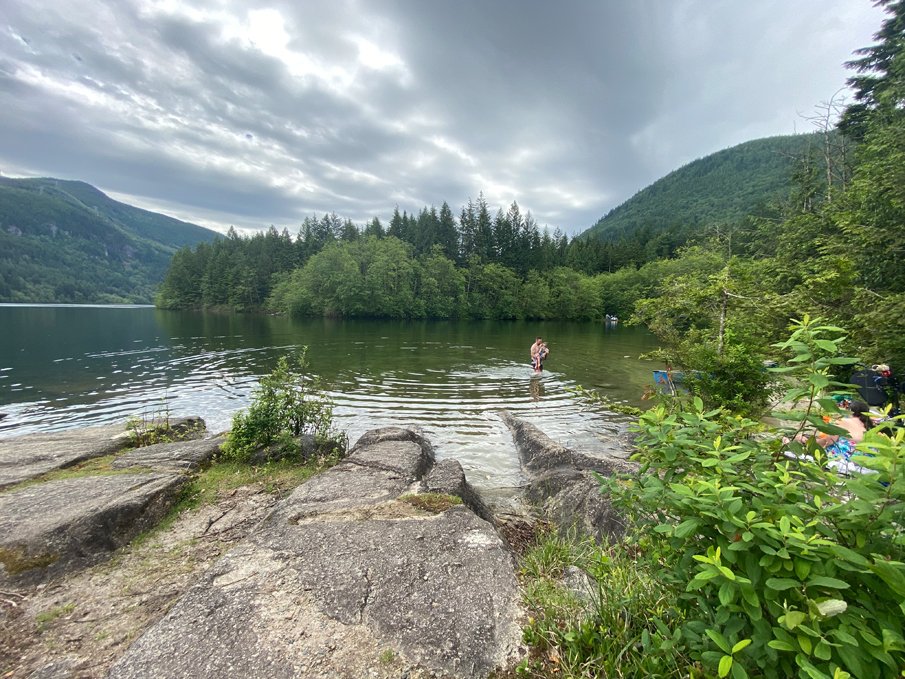 While fishing during a canoe ride, Emmett caught his first fish. And after fishing it was refreshing to go for a swim in Hicks Lake - only Josh and Emmett were brave enough for that! 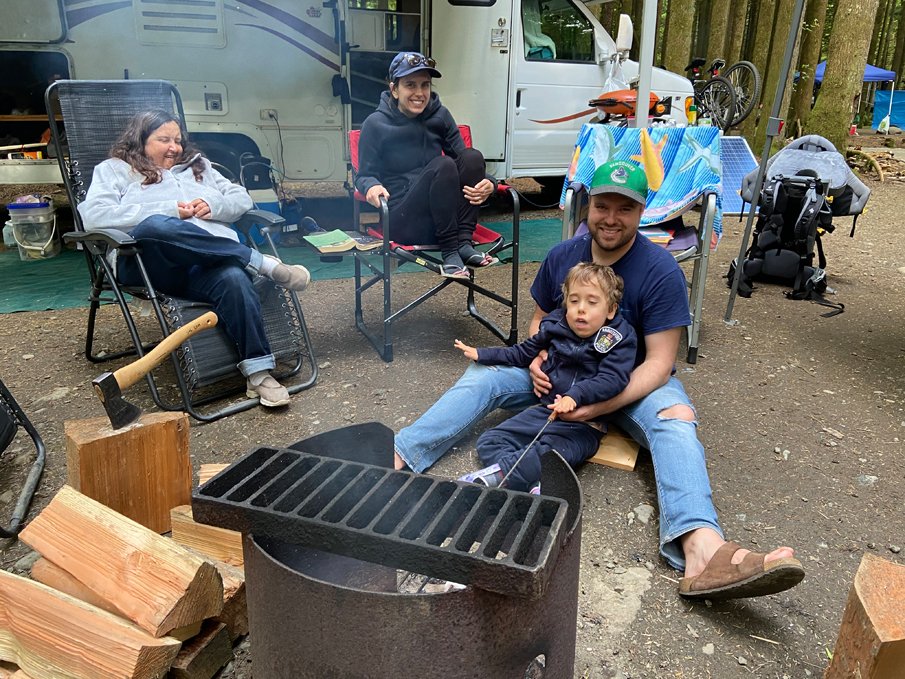 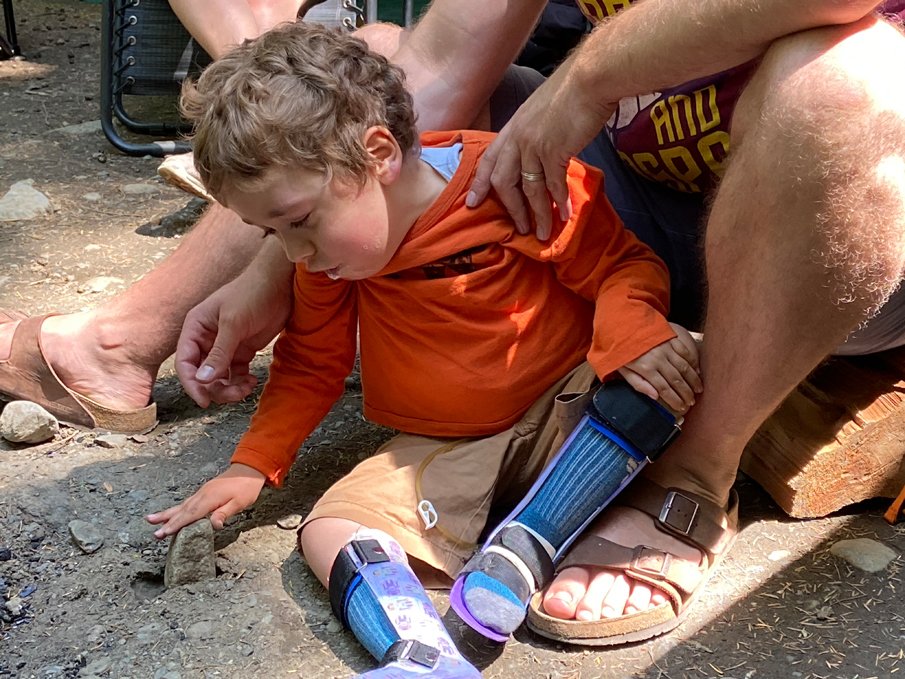 Campfires are so much fun - but finding rocks is even better! 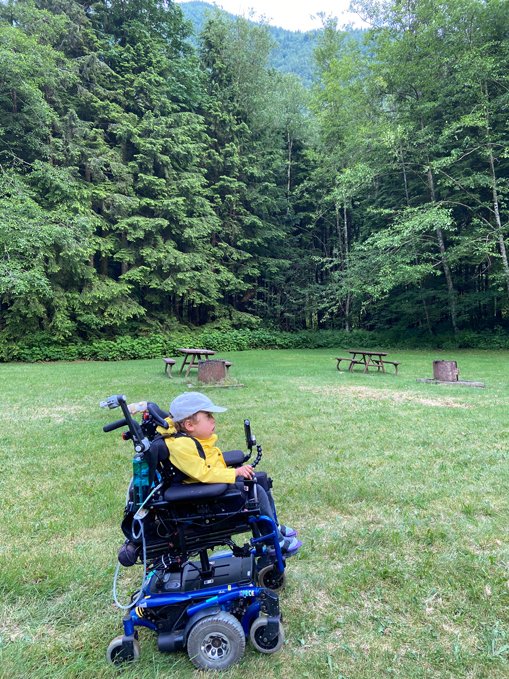 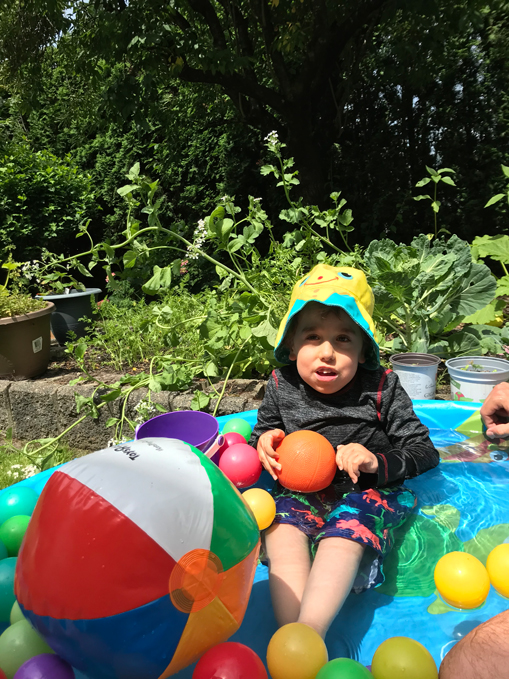 Returning home involved getting cleaned up (we had good weather but there was one rainy day) and then having a swim in the backyard pool. Lots of fun stuff so far this summer. After this next injection of power juice is completed, we're sure that Emmett has plans. Because he always has plans!

Keep reaching for the ð stars. â¤ï¸The Hudsons. You have an amazing family to support you.
Guest Comment 2 years ago
Site Visitor
+1

Such a fun camping trip! I've been thinking how the shifts in social distancing in the whole culture would mimic what Emmett and others with medical concerns deal with every day. Thank you for sharing and lots of prayers and positive thoughts for Emmett as he has a hospital day. the Giesbrechts
Guest Comment 2 years ago
Site Visitor
+1

Wow Emmett packed a lot into his camping expedition! Sounds like it is the start of a new tradition ... and making more memories! Will be thinking of the sweet little guy tomorrow â¤ï¸ Genevieve Gibson
Guest Comment 2 years ago
Site Visitor
+1

So great to hear from you all. The Hudsons and Gibson's from Ontario. The Giesbrechts from BC. The Chandler's from Indiana (I think). Thank you so much. For those of you reading, the Chandler's are parents of 2 amazing young adults (they both have SMA) and Kevan, who they mention, is the inspiration and face of the WeCarryKevan backpack!And thanks so much for adding your names to the post. So appreciated.
Categories
Archives
/dailyweekly-thoughts.php
Site proudly sponsored by OSM | Powered By SiteApex