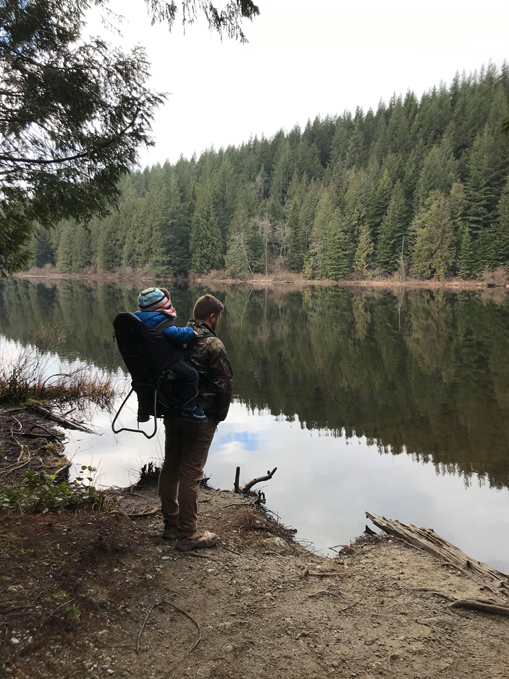 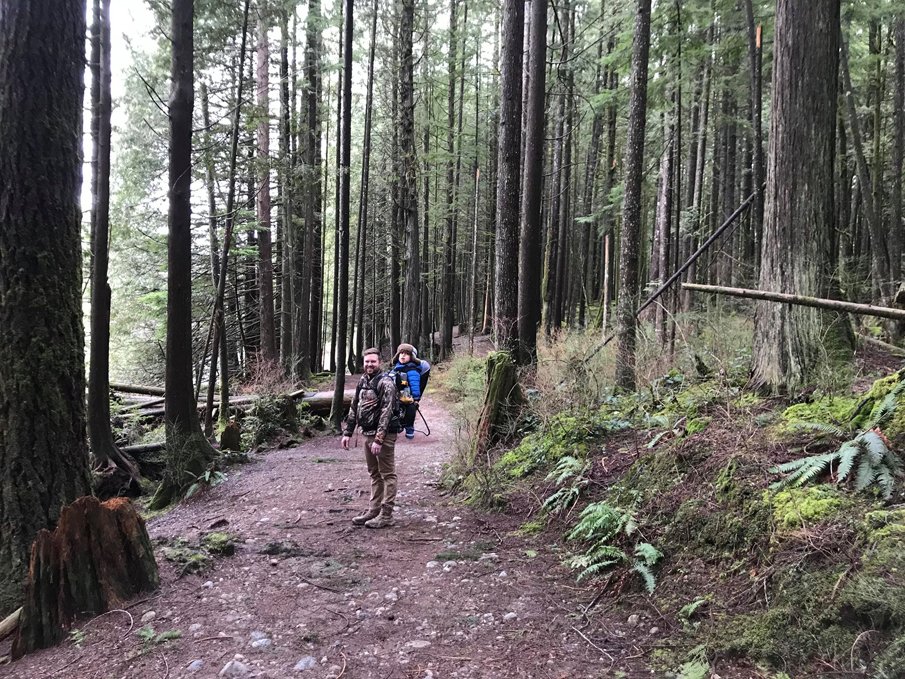 February was an awesome month. Not only is it Alisha's birthday month but also because Alisha, Josh, and Emmett went exploring with their new "WeCarryKevan" backpack that we mentioned in the last post. The great thing about this WCK backpack is that it is comfortable for Emmett and they can go explore areas that otherwise would be impossible for Emmett to access. All it takes is a few huge roots or rocks and a wheelchair simply cannot traverse that terrain. Sure, it's possible to just pick up and carry him - but try carrying a heavy weight on a hike. It's not much fun and that is why backpacks were invented. And the WCK backpack is specifically designed for this purpose. Of course, that doesn't mean that it isn't a workout for both dad and son! Mom too - as she was carrying the suction machine, food pump, and other assorted necessities. The short hike that they went on turned out to be quite a gruelling ordeal. Lots of fun but also an awful lot harder than they anticipated. Hiking poles are a near future expenditure. 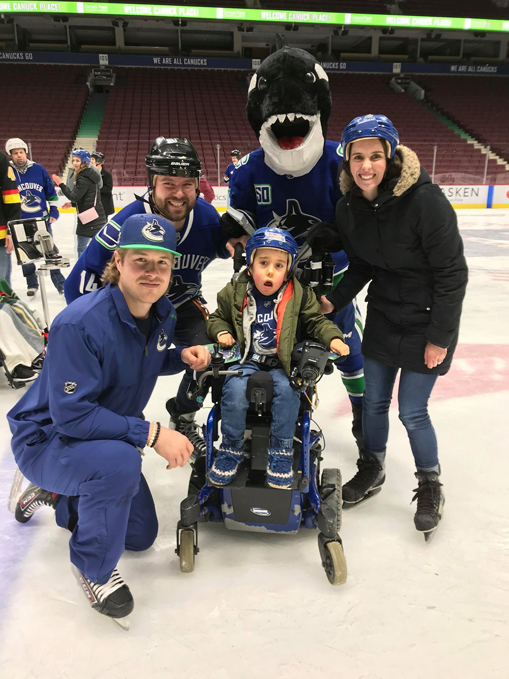 Meeting Brock Boeser at a skating event hosted by Canuck Place was an awesome experience (for Josh). Brock is a 23 year old Vancouver Canucks' player (yes, there is a close rapport between the Vancouver Canucks and Canuck Place) who, as a rookie with the Canucks, scored 25 goals in his first 44 NHL games. Eventually Emmett will find that interesting, but at this age Emmett (and Alisha) were far more interested in meeting Fin, the Vancouver Canucks' mascot. This meeting, however, was like a typical first meeting with Santa Claus. Fin was just too close and startled Emmett! As a mascot at hockey games, Fin does an amazing job of inspiring the crowd with his antics, speed, and dexterity. For a little kid with SMA, Fin skidding to an abrupt stop right in front of him with a spray of ice and snow was just a bit much for Emmett. He preferred Fin at a distance. Or behind him! LOL!

Thank you so much to Canuck Place and to those who support Canuck Place. Events like this are fantastic for the entire family (well, maybe not grandpa who wasn't invited) and provide a rare opportunity for this little boy who has a rare disease. Canuck Place also provides opportunities for overnight respite and support and so much more. It is an invaluable community support. BTW, did you know that the last day of February is Rare Disease Day. 72% of the rare diseases in the world are genetic. 70% of those genetic rare diseases start in childhood. Spinal Muscular Atrophy is a rare disease. Emmett has SMA Type 1. 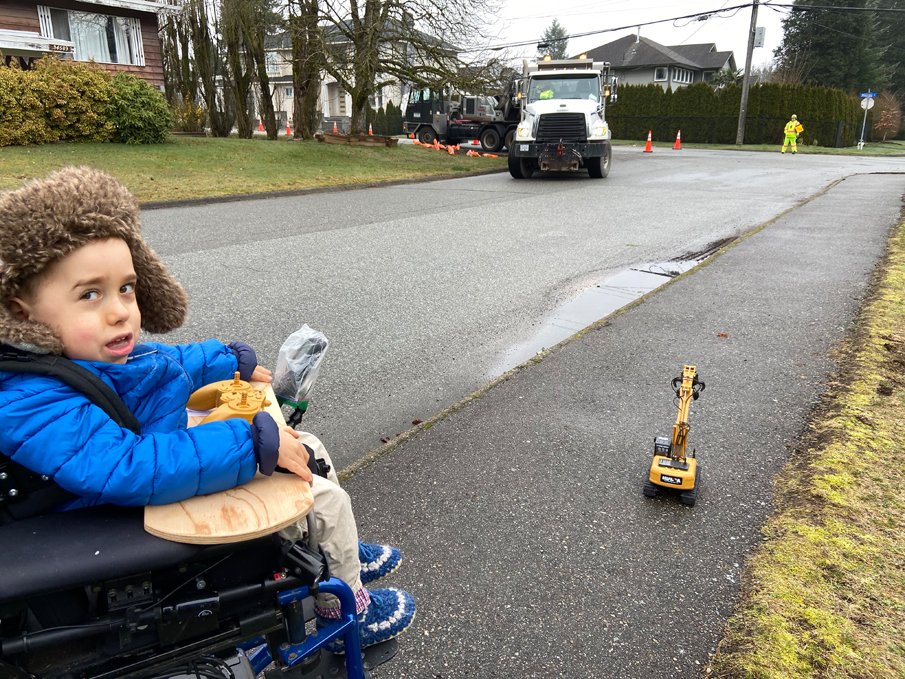 You'll remember how Emmett was trying to push over the stop sign that was in the middle of his sidewalk. And yes, it is his sidewalk as he travels to 'his park' that is just down the street. In addition to the stop sign the access to the street was not accessible at all. The City of Abbotsford was out in full force recently, making an amazing spectacle for a little boy to watch. Two dump trucks, two excavators, a small truck and lots of workmen made for an exciting morning. We have to tell you, there was only one city excavator present. the second excavator was Emmett's! He was supervising and lending a hand with his equipment as needed. This is such a welcome upgrade to Emmett's neighbourhood. And while he will miss getting to try to push over the stop sign, it will be so much nicer for daily travel. 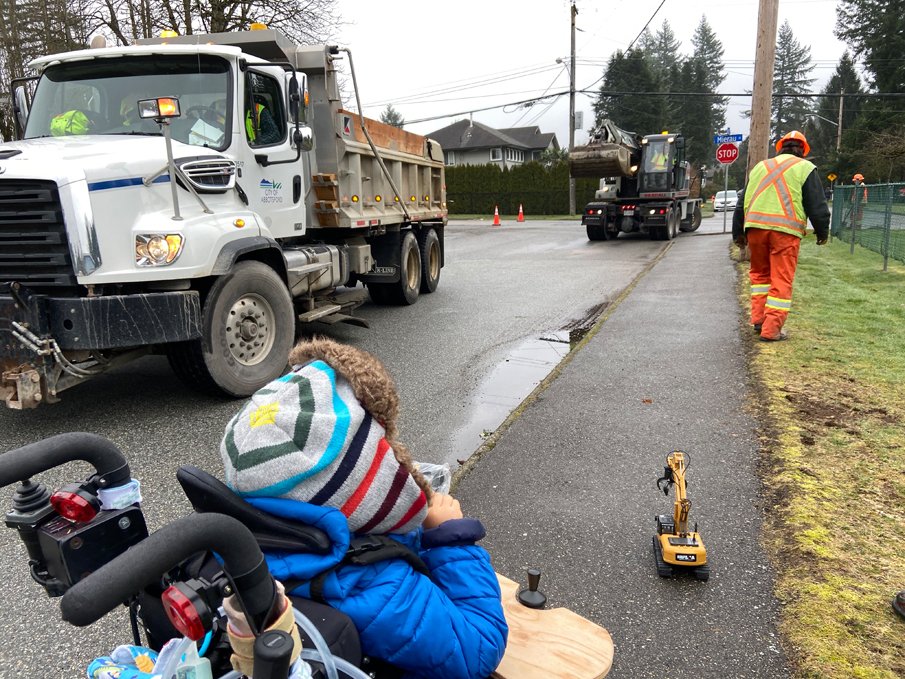 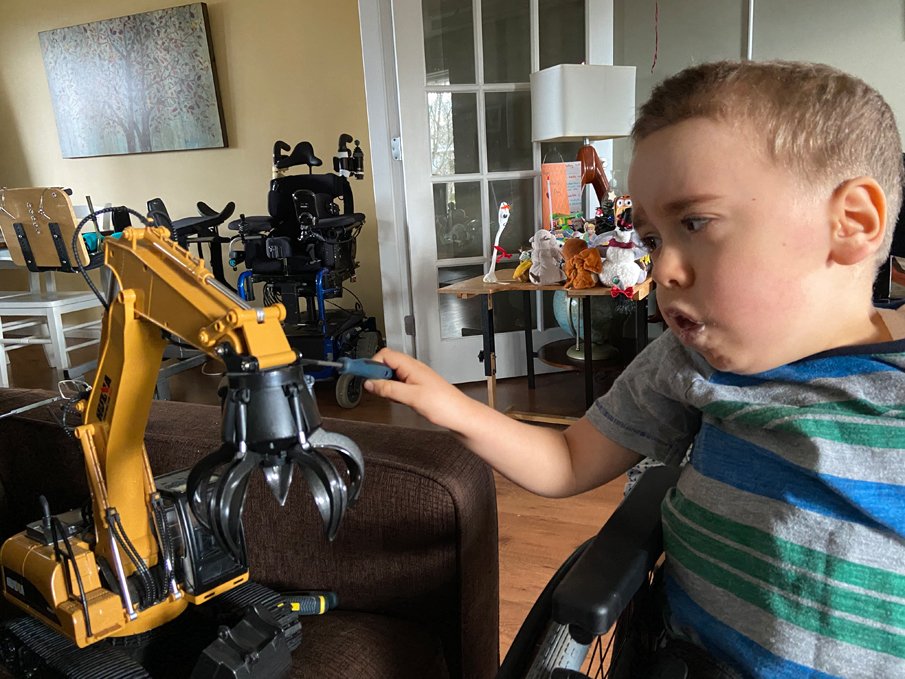 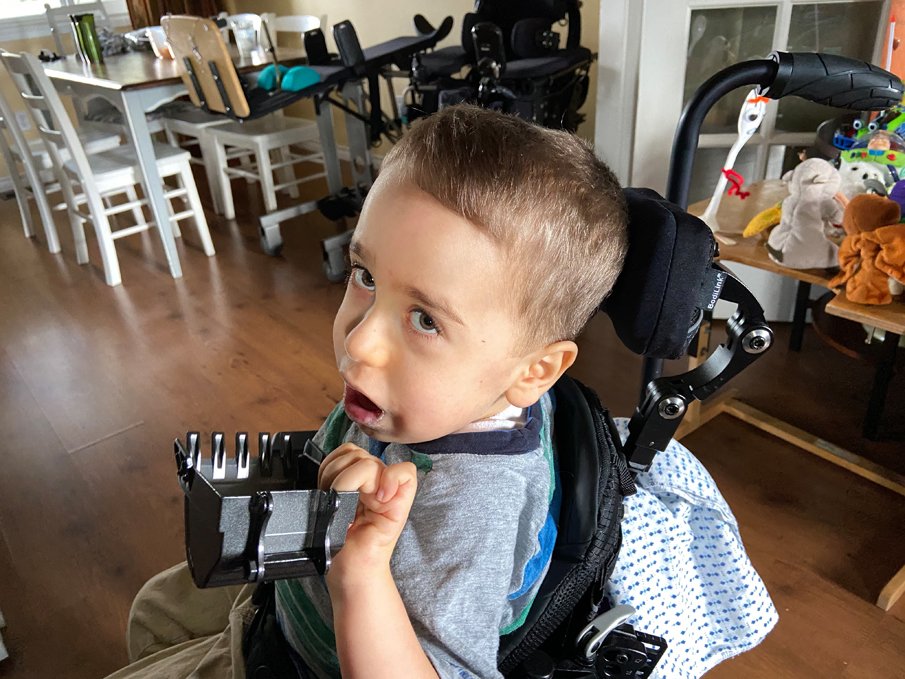 While observing the city excavator at work, Emmett noted that his excavator was different. That his did not have a shovel on the end. This is quite accurate, as his excavator has grappling claws that are fantastic for picking things up. They are not good for digging up sidewalks. He had forgotten (the Christmas morning bustle makes it easy to forget things) that his excavator did indeed come with a shovel. This meant that tools had to come out and he went to work removing the claw and installing the shovel. Now he is ready to go out and dig up mom's gardens. 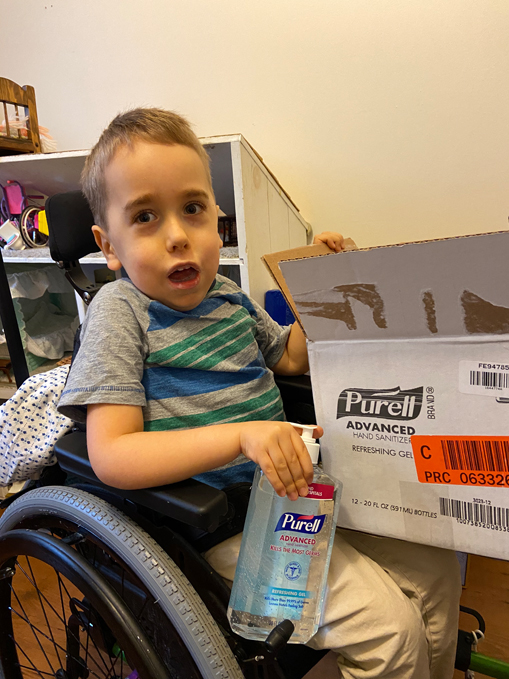 Emmett will be going in on March 5th for his next lumbar puncture. His 17th one. Please remember to keep him in your prayers on that day. You can certainly appreciate that he does not look forward to this event and it does cause him anxiety. He is one smart cookie and he knows the procedure room where it occurs - he calls it the 'hurt room'. And he knows the doctor too, he gave him the nickname of the 'hurt doctor'. Obviously everyone tries to minimize this anxiety and the discomfort. We're hoping to hear that this procedure goes incredibly smoothly.

One of our answers to prayer is that Emmett has had a very healthy winter. Alisha and Josh go to great lengths to keep this little one happy and healthy. That involves sanitizer. If you know Alisha, then you know that their house is cleaner than most hospitals. Guests must use hand sanitizer. Have a cold, then realize that you're not welcome in the vicinity of Emmett. If you have tried to purchase hand sanitizer recently, you can appreciate the stress that Alisha has been experiencing as the shelves are bare. Product is in short supply and if it does arrive at stores, it is gone before it has time to get comfortable on the shelves. We've seen higher than normal prices on Amazon and we've had online orders cancelled as the supplier knows that they cannot fill the order. So it was with great relief that we managed to get a case of 12 bottles south of the border to bring home. We are not sponsored by Purell, but hey, Purell, if you want to we'd be happy to accept your offer!

March. Lumbar Puncture on the 5th.

March 11th - bathroom renovations for an accessible bathroom begin. (Emmett, Alisha, and Josh will move in with Grandma and Grandpa for a while.)

March 14th - kids birthday party with some of Emmett's friends. And family too.

Here are a few more pics. The WCK backpack comes with an awesome neck support to hold up heavy heads. As Alisha and Josh were just taking Emmett on a short hike they left it at home. Everyone underestimated the challenge of this short hike and all felt it, including Emmett who just couldn't hold his heavy head up anymore! Sweet little kid! 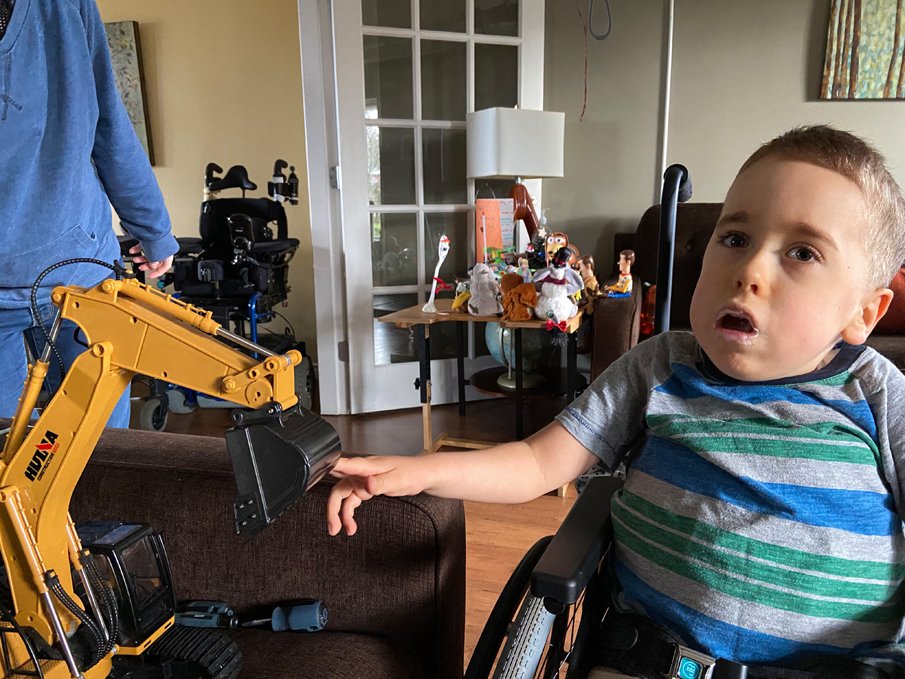 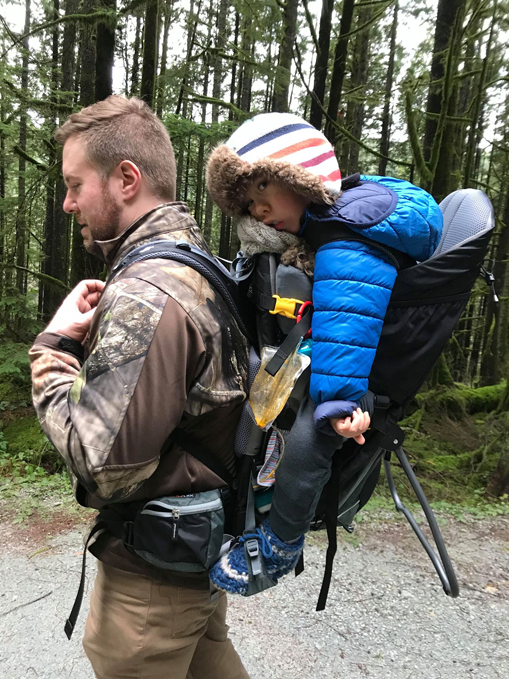 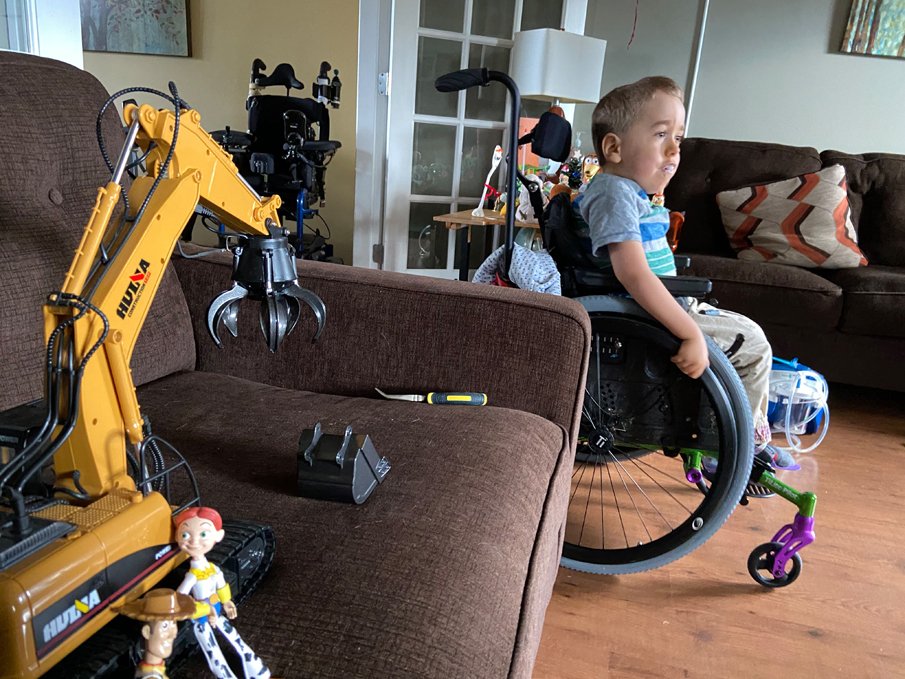