Emmett's Christmas and Hightlights of 2018 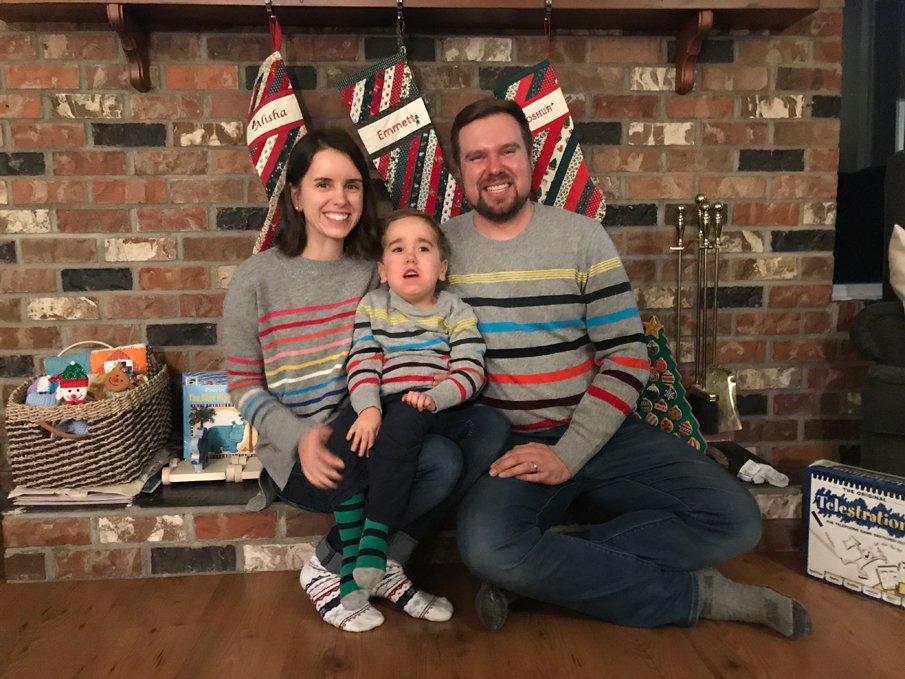 Emmett, Alisha, and Josh want to wish you a Happy New Year. Thank you for reading our blog. Thank you for your prayers, interest, and positive thoughts. This little boy has grown so much this past year. In fact, his Orange Hippos T-shirt is now too small but in August it was too big! That is why Emmett is in a big boy bed and, in fact, is even starting toilet training. This is facilitated by an awesome toilet seat setup which will hopefully reduce back strain - for his mom and dad - not Emmett. 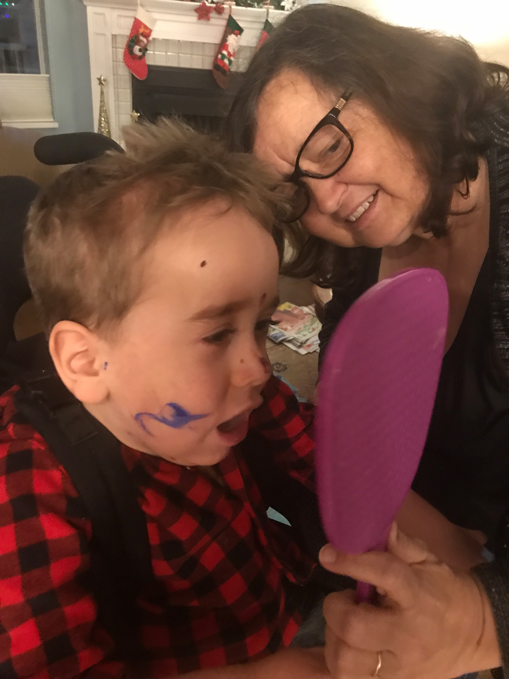 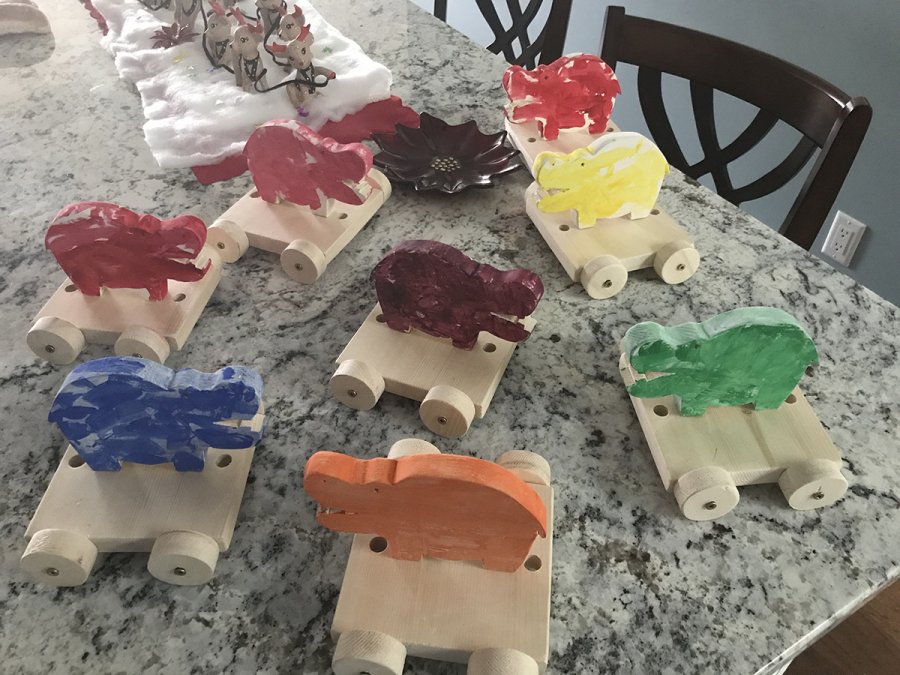 Emmett made Hippos on Wheels for many family members as Christmas presents. He loved giving them out - especially his parents. He shrieked 'Mommy' and 'Daddy' when he gave them their hippos! While Emmett still hates getting dirty, his grandpa somehow got paint all over Emmett's face. Grandma Pam showed him what he looked like in a mirror. He loved it and left the paint on until his bath! 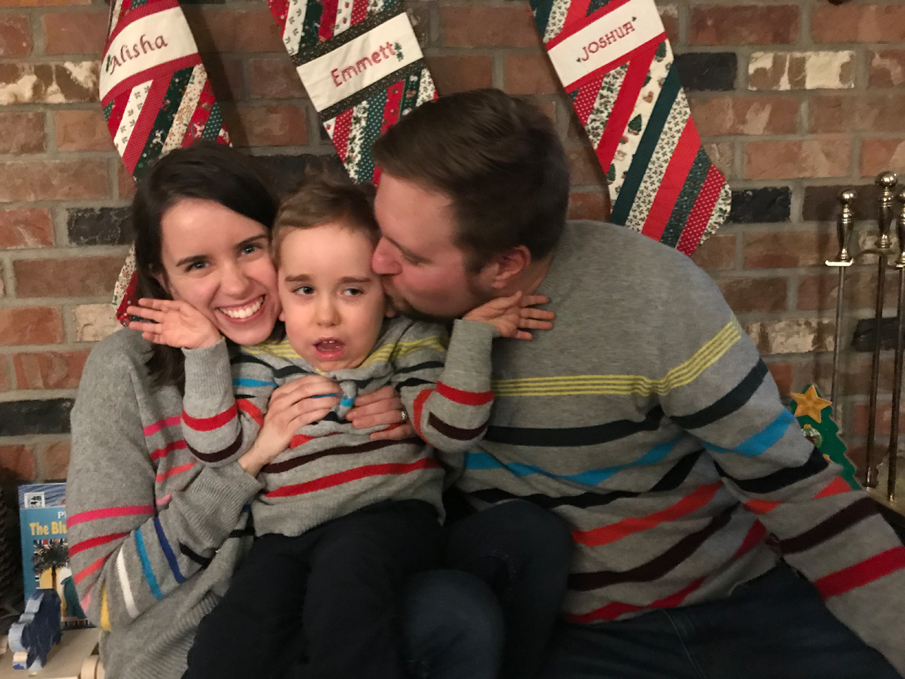 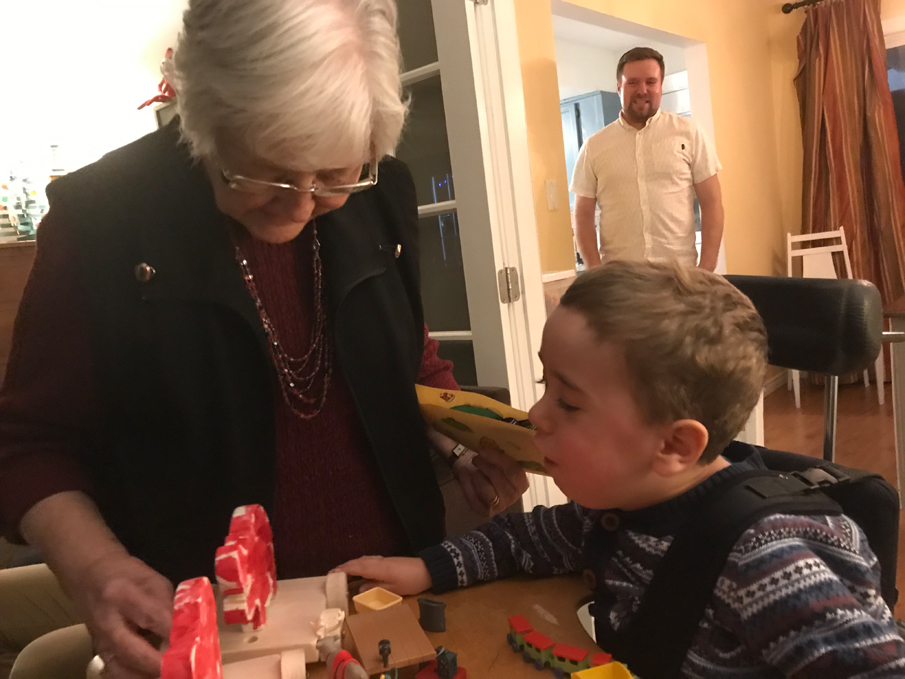 Emmett got to visit with his great-grandma Willms. Family time is so important! 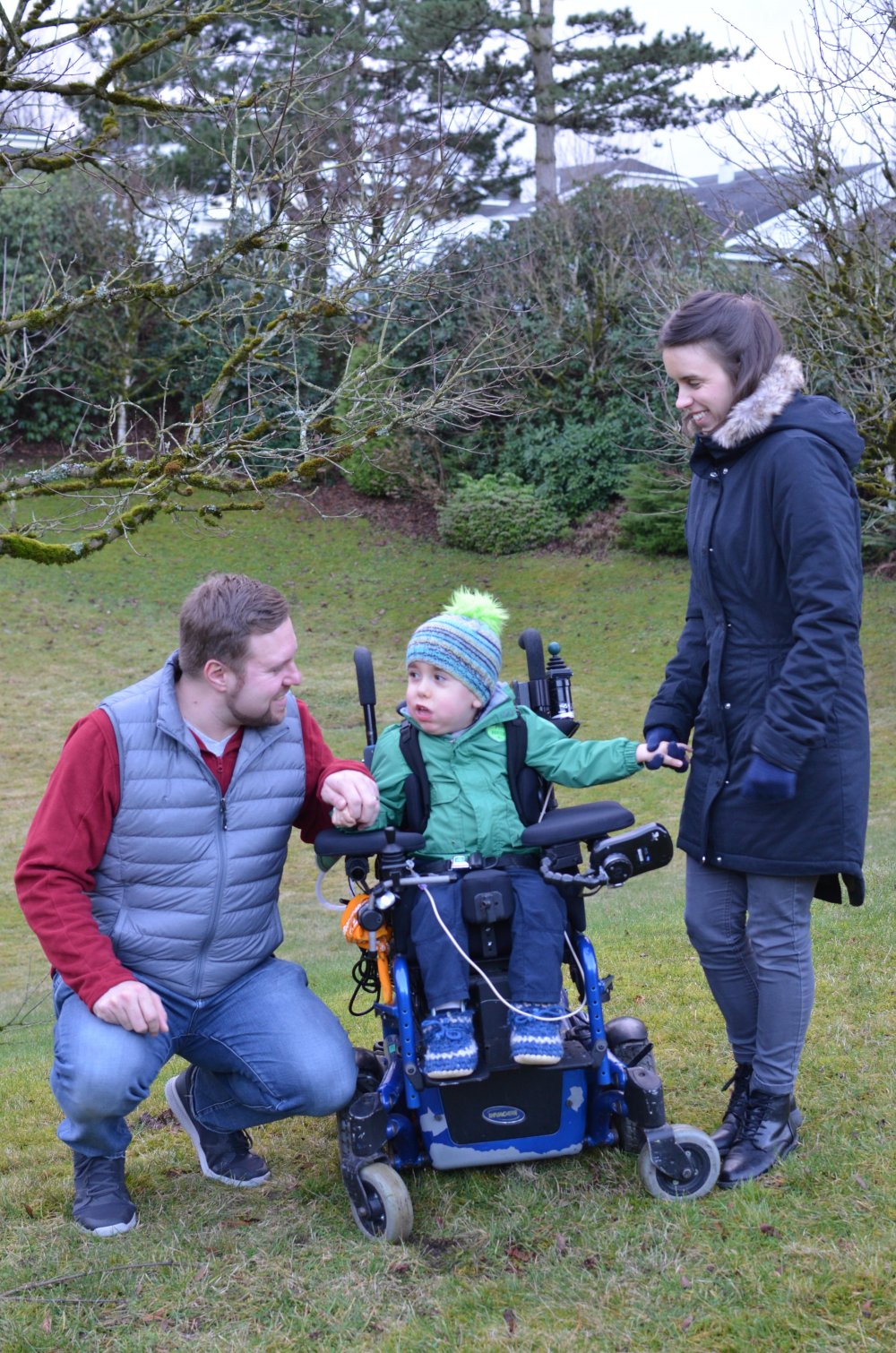 There was no snow on Christmas Day so it was perfect to go out for a roll and walk to get some pictures! 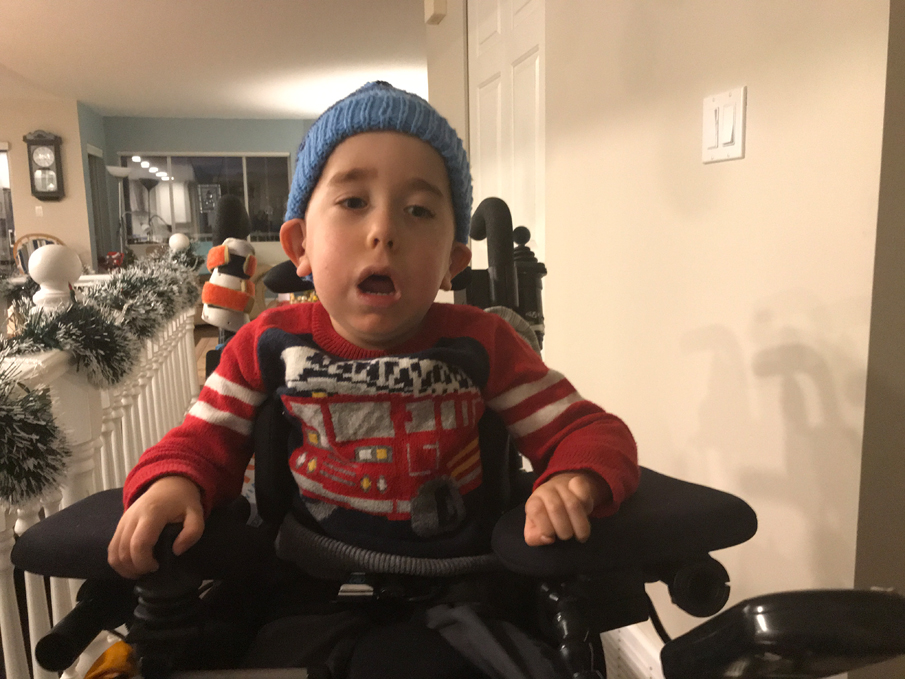 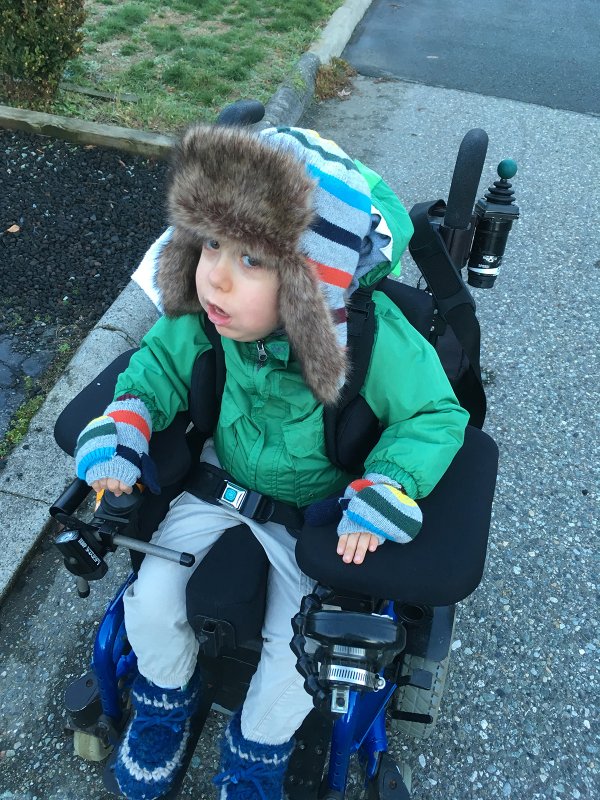 Emmett has become a fussy little boy when it comes to hats. This year he has not wanted his ears to be covered up. Obviously, that causes some concern in cold weather so Grandma came to the rescue with an 'awesome sauce' hat that he allows over his ears. It had matching mittens with a flip opening for his fingers. This is important as he uses his right hand on the joystick and his left hand to change the speed levels. His driving is rather scary when he doesn't have a good grasp on the joystick. 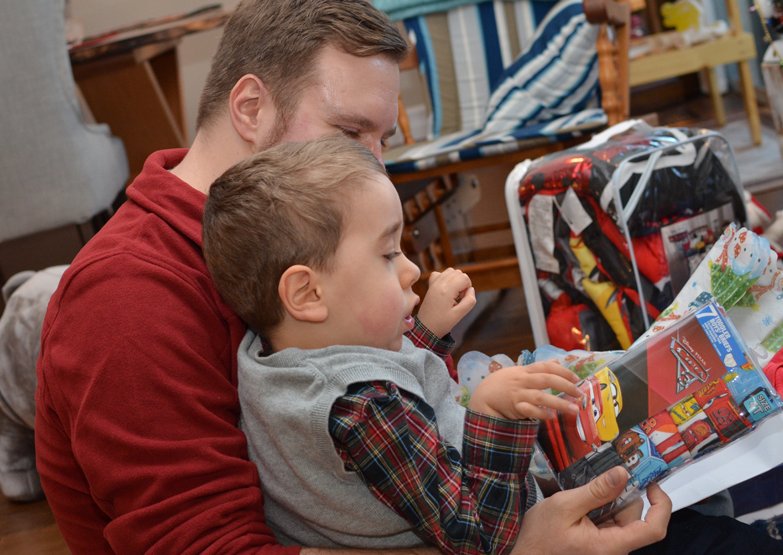 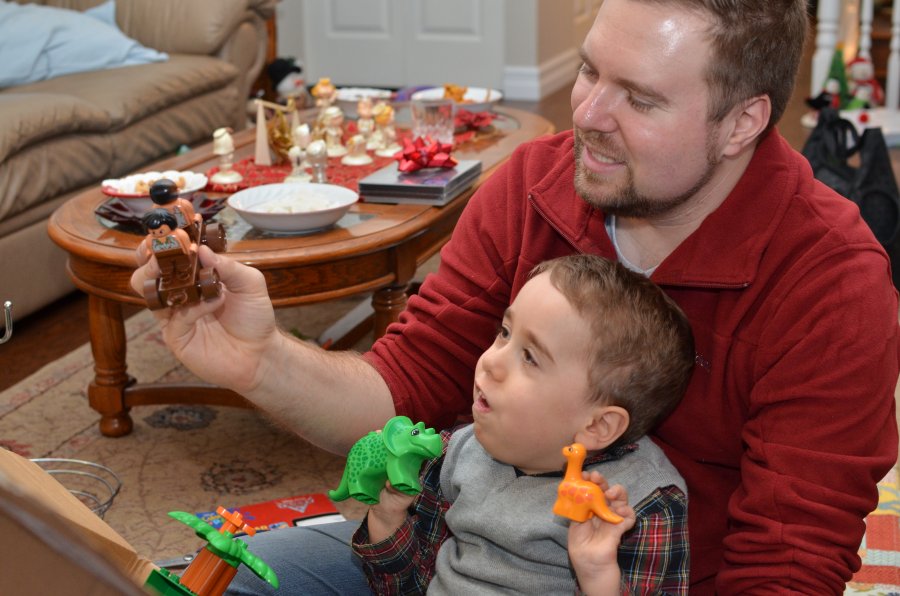 Opening presents was quite a workout. He's got pretty good arm movement but ripping paper still is a lot of hard work for Emmett. In the video you can see how he's turning pages in books. Emmett loves stories! In the video you'll hear Emmett calling out 'Look, Po!' a couple of times - we should explain that Po is his giant stuffed Hippopotamus. This boy has a vivid imagination. 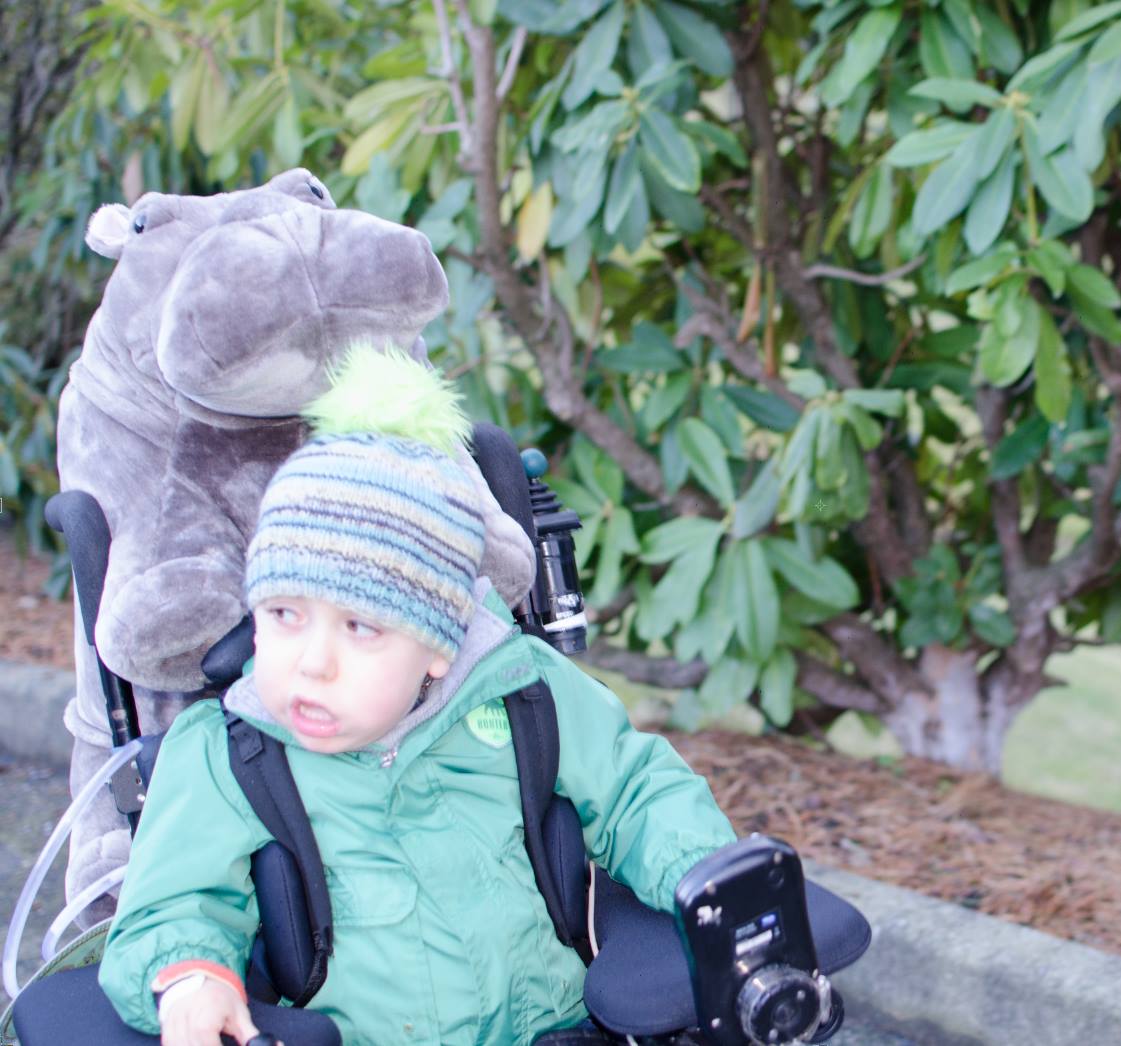 You've seen Emmett pull Po around in his little red wagon. This time Po rode on the back of the power chair. This was also the first time that Emmett has allowed Po to come over to grandma and grandpas. 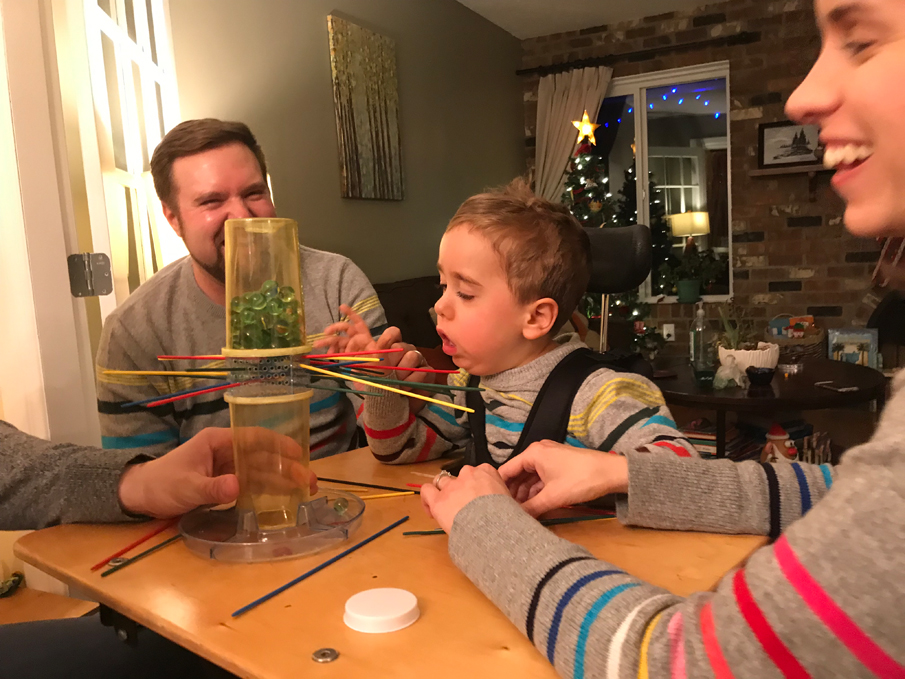 On New Year's eve Emmett stayed up until the clock hit 9 o'clock. He enjoyed playing KerPlunk and Hungry Hippos! 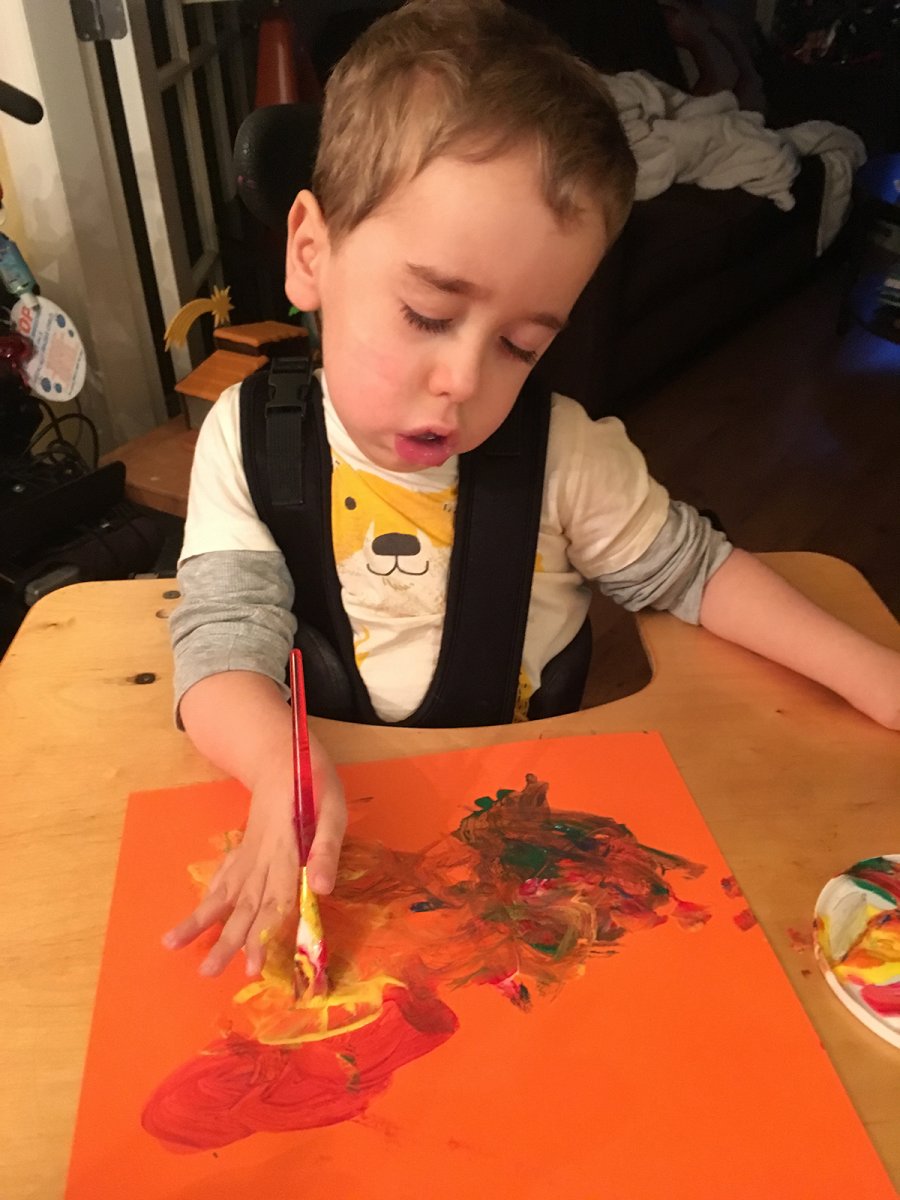 2018 has ended. 2019 has started. We are looking forward to what is ahead. What we can tell you is that the drug Spinraza (also known as Nusinersen) has changed Emmett's life. The changes are still happening. 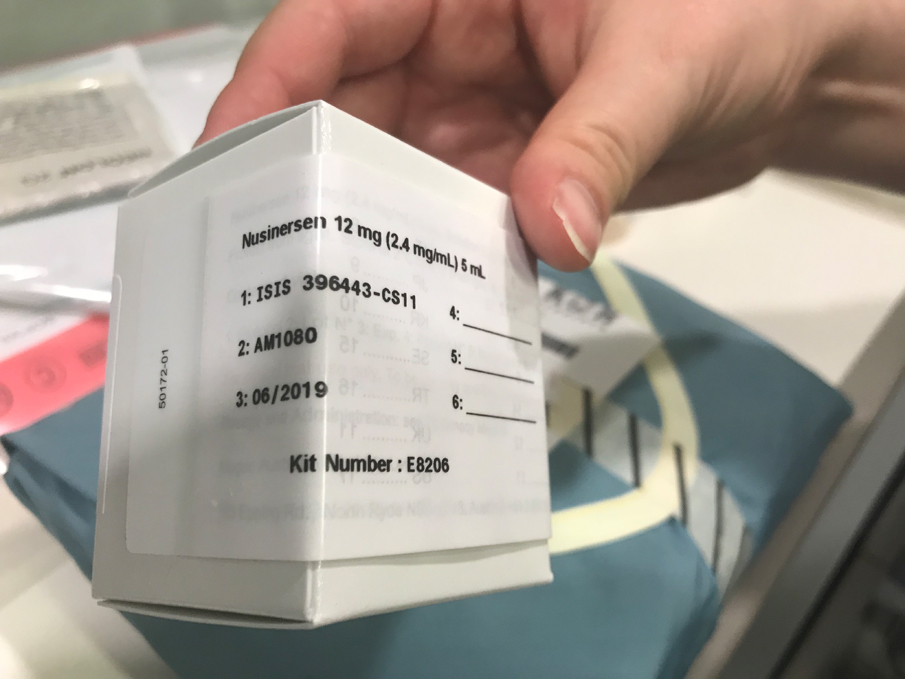 It has been quite a year for Emmett. Here's a quick recap.

January - 2018 started off well and, with his back brace on he was sitting up by himself.

- but on January 26, 2018 he was admitted to BC Children's hospital, into ICU the next day and was diagnosed with RSV. We cannot describe how seriously this affected Emmett and all around him. And remind you again, if you're ill please ensure that you don't spread your illness with medically fragile (well, honestly, don't share it with anyone!) He was intubated. He was heavily sedated for several days. He had more tubes inserted into his little body than we could count. It was terrifying. The original blog posts left out so much of the terror we felt. It was too much to share.

February - it was a total of two agonizing weeks that Emmett was in the ICU and on February 9 Emmett was discharged. He bounced back so quickly! Phew.

March - his third birthday and a special ride on a BC Transit bus!

April - "Read a book. Please!" and "What's That!" seem to be his favourite phrases

May - Emmett's power chair had it's speed limits upgraded. Can he ever go fast now!

June - We introduced you to The Orange Hippos! And Emmett went camping! He got to try out a standing walker - which he sort of liked but it hurt his pen... hmmm, can we type that word on a family blog? (he still doesn't have a permanent standing walker. Maybe in 2019!)

August - The Orange Hippos participated in Florence and Charlie's 10K to End SMA. Emmett's team, The Orange Hippos, was identified as the team that raised the most funds! Thanks to all of you for your generosity.

September - Emmett went fishing. During tummy time when he was lifted up he HELD UP HIS OWN HEAD! Such a huge accomplishment!

October - Emmett has SMA Type 1 but in October his neurologist told him and his parents that Emmett was now presenting like a child with SMA Type 2. This is a huge improvement. The drug Spinraza is the first approved medical treatment for SMA and IT WORKS WONDERS!

December - Emmett got to go on a plane ride with Santa Claus. This was organized by the very amazing Canuck Place! Last January we told you how Emmett was sitting up with a back brace. Well, now when he is put in a sitting position he can sit up without a back brace. Plus, during tummy time he held his head up on his own to watch Daniel Tiger. THAT'S ANOTHER FIRST! Who knows what will be next!