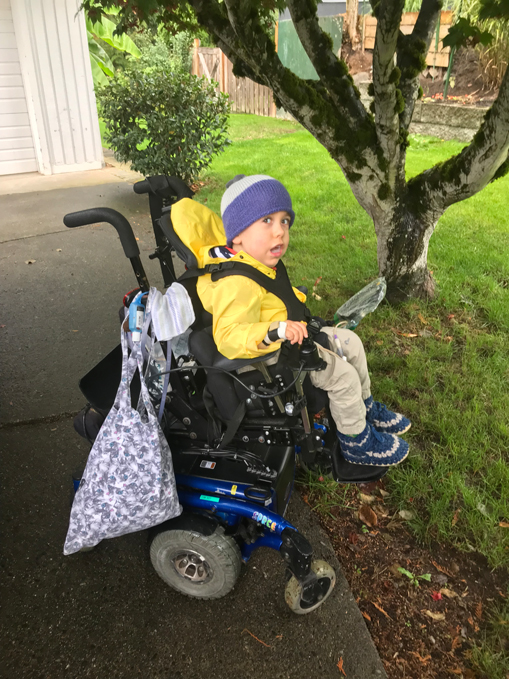 If you are wondering what an EMMETTism is, then I'm guessing that you haven't read this blog too often. Allow me to provide a definition. An EMMETTism is a phrase or comment from Emmett which makes us smile - possibly even laugh. Unfortunately we have forgotten several EMMETTism's, but we have a few here to share with you. N.B., EMMETTism must be typed/written with the first six letters capitalized.

There's nothing like freewheeling down a hill. This isn't an EMMETTism - it's just a little boy enjoying life! 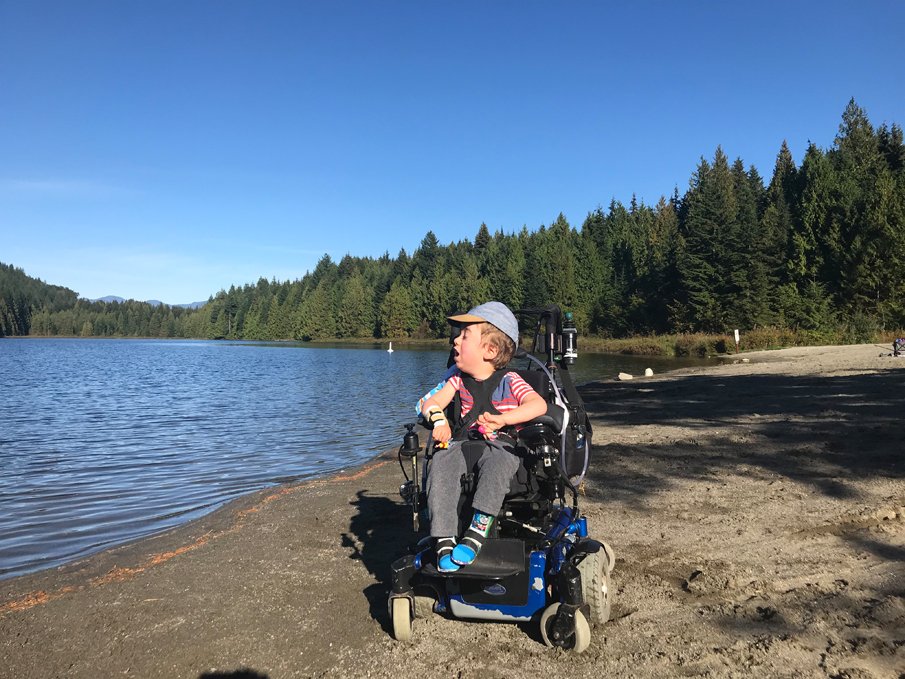 Emmett loves having a bath. Not just because he loves being clean, because he is fanatical about being clean, but also because it is great physical exercise. One night, while having a bath, Emmett wanted his hair washed with his mommy’s shampoo rather than his baby shampoo. After the bath he was all excited to see himself in the mirror. When he did, he burst into tears. When finally calmed down the reason for the tears came out. Mommy’s shampoo bottle was orange. Emmett thought his hair would be orange.

Watching TV, videos, or YouTube is not something that Emmett gets to do very often. It is quite a treat, in fact. In early September Emmett had gotten the sniffles - which he probably caught from me - and was feeling a bit under the weather.  One afternoon he looked at his mom and told her that he needed a rest on bipap ‘and a little bit of veggie tales’. Alisha couldn't pass up this request for video time. 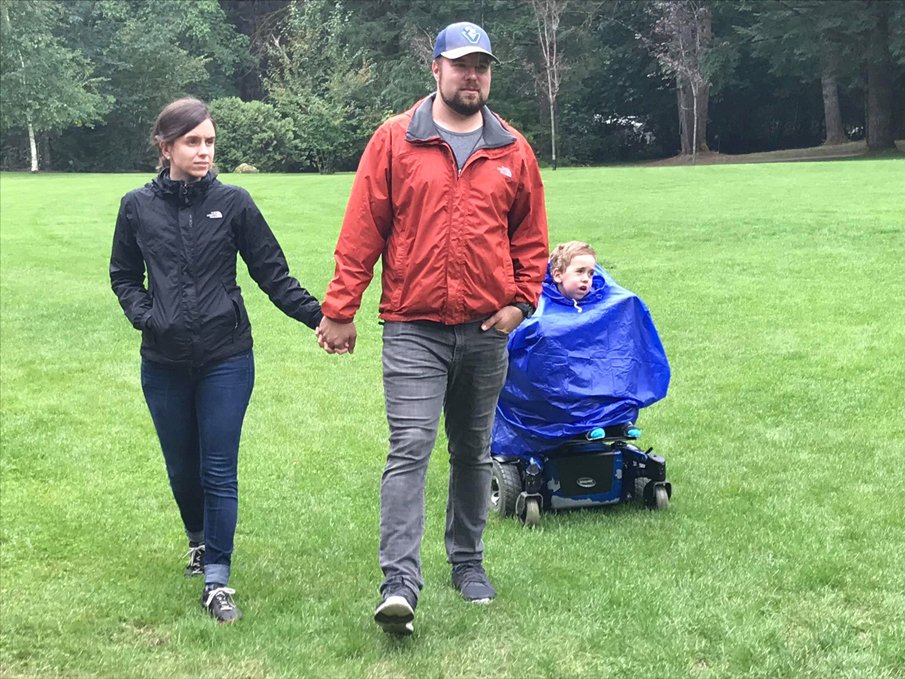 As we've already indicated, Emmett is a clean fanatic. So much so that if someone else plays with his toys he will ask if they've been sanitized before he will play with them. He's never liked touching sand or doing finger painting - although we've been doing that. It's sort of like Star Trek - You know, the one that goes 'Dirt. The messy stuff on your fingers. These are the adventures of Emmett, his mission, to explore dirt and actually get it on his fingers without crying'. *You have to say that with the music of the Star Trek theme playing in your head. Well, just last week Emmett wasn’t letting Alisha brush his teeth. They had just been at the dentist and he loved it (they were at Allwood Dental, a new clinic with awesome staff and a cool TV setup that moves up over your head so you can watch without interruption), so to get his teeth brushed Alisha told him they were playing pretend. That she was the dentist and he was her patient. Emmett looked at her and said “You a dentist, mommy? Well, where’s your TV????” 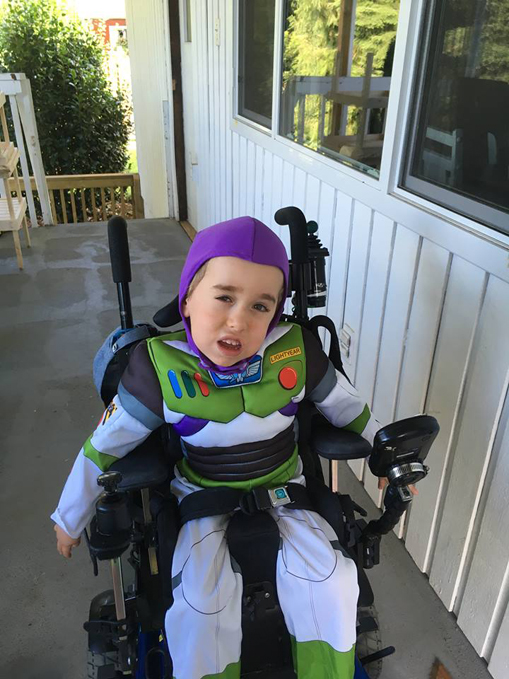 Emmett loves Toy Story. It is literally his favourite. He gets to watch the DVD while driving to and from BC's Children's Hospital - which will be happening on October 9 (today) as he is heading in for a bunch of assessments and tests - and he does know the story inside and out. He has miniature Toy Story characters that he loves playing with. At almost any time, he can tell you exactly where in the house his Toy Story tupperware container is so that you can find his toys. In the video the toys are only animated when the 'humans' are not around and that includes the boy Andy that the toys belong to, so when the 'humans' are around they stop and drop. One of Emmett's favourite things is shouting "Andy’s coming"! When Emmett does that, you have to stop, fall over and be still.

A less challenging command from Emmett is that he will shout "Family Hug!" and Josh, Alisha, and Wendell (the cat) have to stop everything and immediately join with Emmett in a giant bear hug.

Of course, there are the longstanding favourites. Carrots. Emmett loves carrots. It will be fantastic when the time comes that Emmett can eat food by mouth versus his tube feedings. We are all, however, quite worried that when he finally tastes carrots that he may be somewhat disappointed! Of course, they will always be orange. His favourite animal is most certainly still the Hippo. And 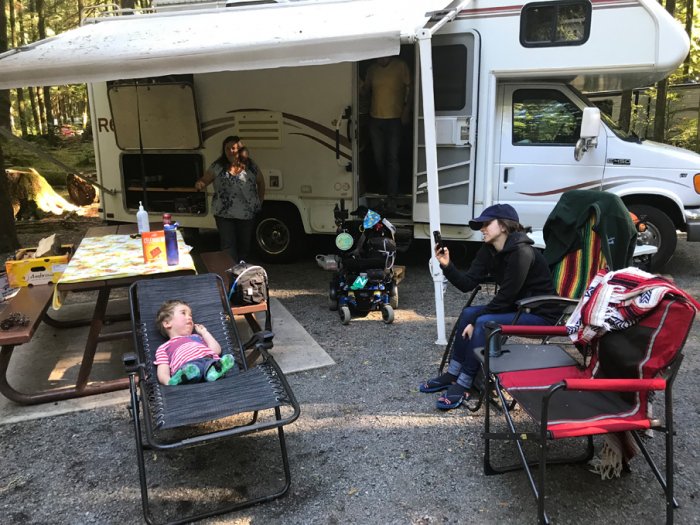 based upon the picture book he knows that Hippos hiccup and giraffe’s laugh. And he still loves orange hippos. We actually found some orange hippos on Amazon and ordered them. They never arrived. After some emails, the seller re-sent the order. And it never arrived. We were quite disappointed but four months later both orders arrived - we now have lots of orange hippos.

While camping this summer we were out for a stroll with Emmett. (I like stroll better than walk. Obviously, Emmett doesn't walk. In his power chair he rolls. And stroll has roll in it - so I think it's fitting and inclusive to say we were out for a stroll). As we went around Emmett observed everything from the bugs to the RVs to the other people out for a stroll. He meanders. He does circles. He is a typical three year old. But as we came up to a small parking lot his irregular path suddenly straightened and he went like an arrow straight towards a beautifully restored classic Dodge muscle car. He stopped right at it and rotated his chair to look at us. Then he exclaimed, "This is me!" The car - a brilliant orange.

As a three and a half year old Emmett obviously has an early bedtime. Couple that age with SMA and that early bedtime is an absolute necessity as he is exhausted at the end of the day. This led to the next EMMETTism which occurred while camping during the fall. All spring and summer Emmett has been going to bed while the sun has still been up high and bright. Sitting beside the campfire as darkness settled in, Emmett was enjoying the sights and sounds of the campfire. He loved watching others roast marshmallows and enjoyed squishing his own right out of the bag marshmallow. Out of the blue - or rather out of the dark - he exclaimed, "Look! Dots!" as he starred up at the night sky! It has been months since he saw stars and his words failed him. So dots it was! 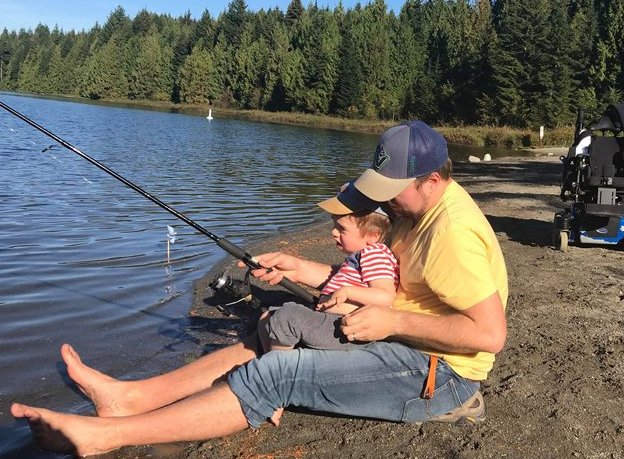 After reading the book the Blue Hippo, in which a real hippo turns into a toy hippo on wheels so he can be close to the little human girl that he loves and then after being forgotten when the girl grows up, becomes the girl's little baby boy, Emmett has decided that he wants an orange hippo on wheels for Christmas, that his mommy wants a blue hippo on wheels, and his daddy wants a green hippo on wheels.

Christmas is important for Emmett year round. It was a disaster for Emmett when he lost his playmobile Santa figurine. Fortunately, his grandma Rhonda found one in a thrift store. Hurray! After his fishing excursion with his daddy, Emmett has also added an orange fishing rod to his Christmas wish list!

Emmett's Favourite Jokes: These are pretty corny and remember they come from a three year old.

Why does Santa have three gardens - So he can hoe, hoe, hoe!

Why does the cow cross the road? To get to the moooooo-vies.

Why did the banana have to go to the doctor? He wasn't 'peeling' well!

Finally, Emmett will always try to prolong play time, story time, or anytime that he is having fun with the phrase "Just a couple more minutes".  Not two minutes. Or five. And if you say two more minutes that is absolutely wrong. It has to be a couple more MINUTES! And yes, he will start to shout minutes if you don't agree with him right away.

The blog is finished, but if you have a couple of more minutes, Emmett has finished all of his check-ups at the Children's Hospital today. His neurologist told him and his parents that Emmett, who has SMA Type 1, now presents as having SMA Type 2. We have felt that for a while, but now it's official. This is a pretty big Spinraza moment for us. This drug is literally a miraculous and life changing five millilitres that Emmett gets every four months. WOW!

Loved reading about EMMETTisms! Rejoicing with all of you for the change of Emmett's status - now SMA Type 2!
Categories
Archives
/dailyweekly-thoughts.php
Site proudly sponsored by OSM | Powered By SiteApex