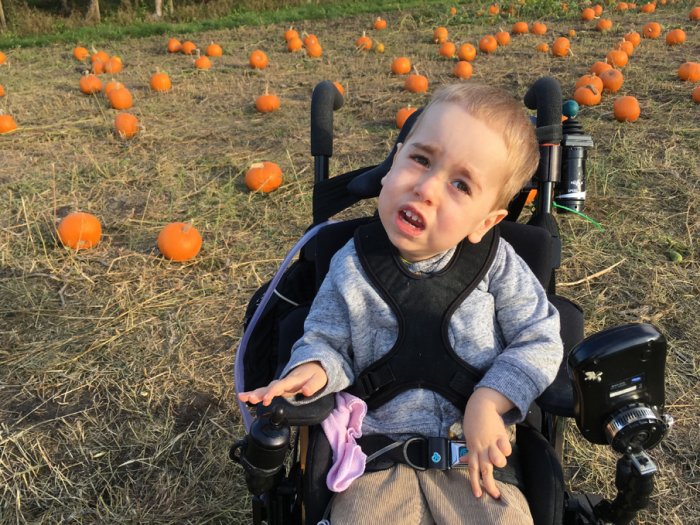 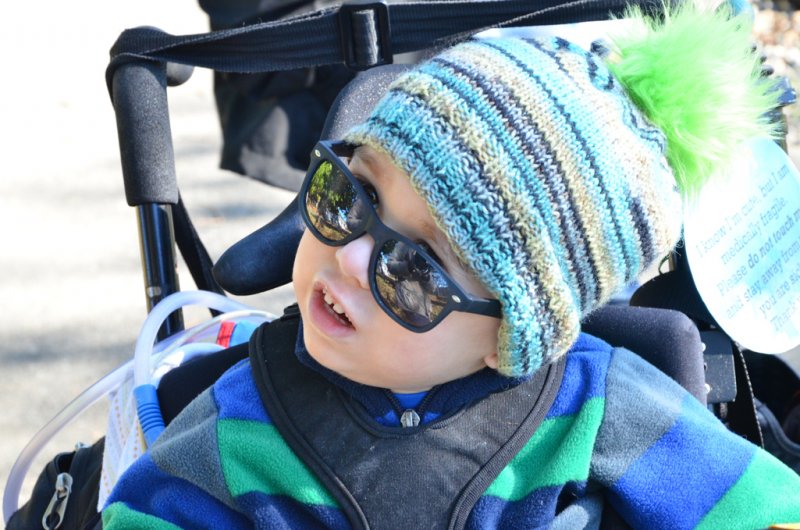 There was no post on October the ninth, which was the start of Emmett's 31st month. It was also Thanksgiving and a time for gathering with family and friends and thinking about all of the things that we are thankful for. And there are a bunch. But that is not why we missed getting a post out on the ninth. And Emmett is doing very well - that didn't stop the post. He's feeling very good and has bounced back from his September health issues. This is a good thing because we want him to be strong as we head into flu and cold season. Emmett got to go out to a corn maze where they didn't get lost, but for Alisha and Josh it seemed like it as Emmett would have stayed all day. Searching for pumpkins was also great fun. He found it so intriguing. His mom and dad had to literally drag him away! LOL!

Earlier this month Emmett was back at the Greater Vancouver Zoo. While there his favourite animal, the hippopotamus, was swimming around and submerging and then popping its head back above water. It even yawned once - but Emmett had his chair turned so didn't see the yawn. Plus Emmett spent a couple of days at Camp Squeah, just outside of Hope, B.C. Lots of trees, fresh air, and he got to see a deer family eating lunch in the camp's garden. He also got to wheel around in the gym while everyone else was having 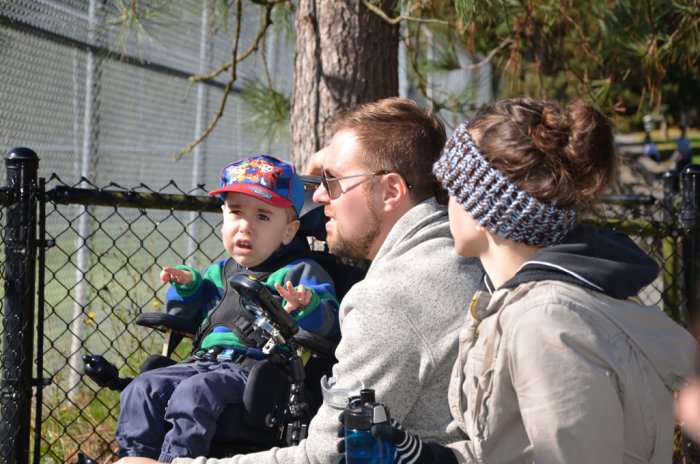 meals. The great thing about a G-Tube is that Emmett isn't tied down by three meals a day - which meant great times in the empty gym.

And Thanksgiving at his Grandma and Grandpa Willms home was lovely. It started off with an amazing scavenger hunt in which Emmett had to scour their large property to find toy animals that were hiding everywhere. There had to be two dozen or more of the little critters waiting for Emmett to find them. Then great family time that included his Great-Grandma and Great-Grandpa Willms. Emmett napped while all of us enjoyed a turkey feast.

As both Woody the Cowboy and Buzz Lightyear are still very much a part of Emmett's daily activities, you're going to have to wait until the end of the month to see which of these characters actually shows up at the Willms' home. Emmett doesn't know, but even if he did he wouldn't tell you! He's great at keeping secrets. Especially if he doesn't know you well, then his lips will be sealed.

Thankful - for a medical community that supports Emmett and his family in so many wonderful ways.

Thankful - for the drug trial that Emmett has been part of for over two years now. This drug, called Spinraza now (it's had a couple of names), literally amazes us.

Thankful - for every smile that Emmett shares! You cannot believe how adorable he is. Or how big he is 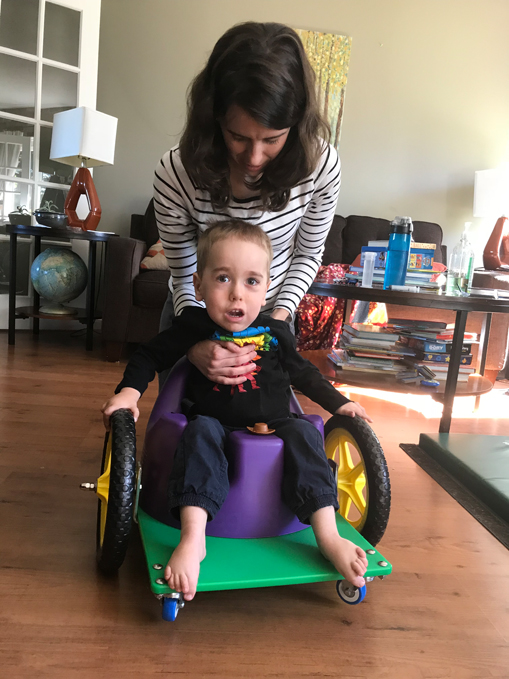 Thankful - for his power wheelchair which gives him great joy and freedom to move about. And amazed that the moment he was set up in his colourful wheelchair, he grabbed the wheels and started to attempt to move them. He needs back support right now plus doesn't have the upper body strength to get it rolling on his own, but he's trying. With a little nudge he can keep it moving for a little bit.

Thankful - that his speech is getting better every week. Obviously those familiar with him understand him much better than strangers, but he is certainly making progress. And you should hear him sing! Of course, he still is in a shy mode so there is no singing or talking or verbalizing anything when strangers are around.

Thankful - for so many things. We cannot recount them all.

But you know, even though we are thankful for so much this is still tough. Would we be more thankful if Spinal Muscular Atrophy Type 1 hadn't had it's grip on Emmett's body? Would we be less thankful? Would I know my 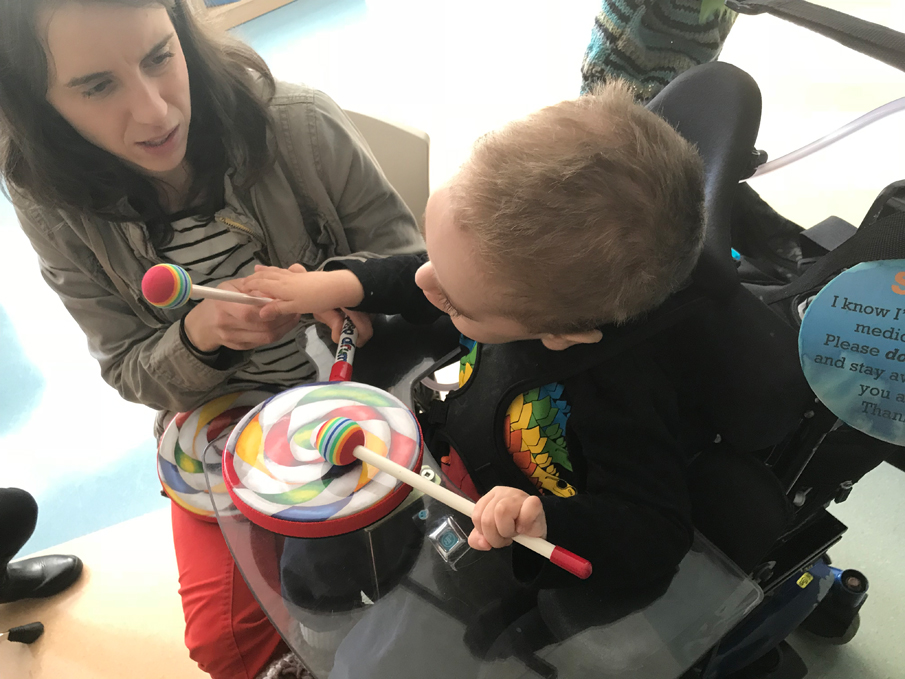 grandson as well as I now do? You know, I am so thankful for this little boy, his mommy and his daddy. But this disease, Spinal Muscular Atrophy, this is a terrible disease. It affects babies and, when it is at its worst, SMA stops them from moving and swallowing and breathing. It changes families. Every aspect of Alisha and Josh's life revolves around how SMA has affected their family. They cannot run out to the store without making plans ... the store! Seriously, they cannot even run out into the front or back yard to do yard work.

Why wasn't there a blog post on October 9th, Thanksgiving day? Here I must put in a disclaimer and specify that this is me and me alone talking. Not Emmett's mom or dad. Not his other grandparents. Me. There was no post because I wasn't sure that I was thankful. I was and am angry with SMA. I'm angry at how it affects not only Emmett, but so many other little ones around the world. It shouldn't happen. Of course, that can be said about all of the other diseases and natural disasters and horrible things that happen in this world we inhabit. It shouldn't be. But with SMA, it is right here with our family. We see it every minute of the day. And as a grandparent I'm not even right there - I still do my own stuff. Emmett cannot. He will need ongoing support. Period.

So this blog is a few days late ... but I can say that I'm thankful. I'm still angry - but I'm thankful. I am thankful for this little boy that we love with all of our hearts. This little one who marches to his own drummer. Who has started doing scissor kicks in the bathtub. Who tries to roll his own wheelchair. Because ... There is hope. There is always hope. SMA - well, we will temporarily forget about you. Because we have a little boy to read books with, to count with, to practice talking with, and to laugh with! Laughing with my grandson - there is nothing better. And I'm very thankful for that! 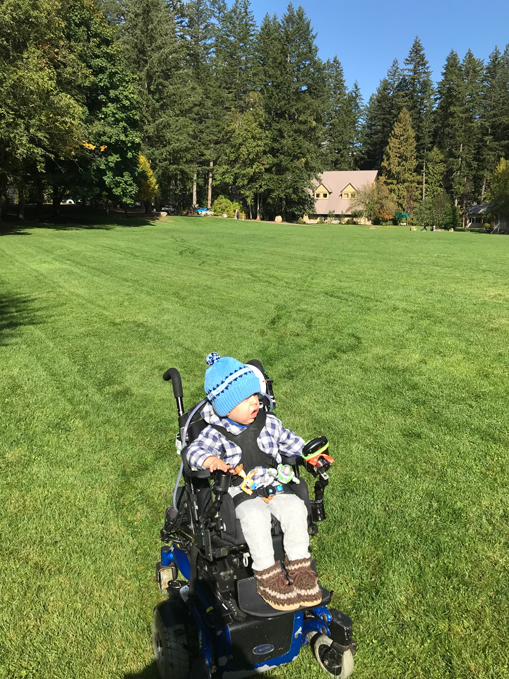 If you look behind Emmett in the above photograph, you'll see his tracks in the grass. He wanders. Goes left and then goes right. Follows the sounds and sights on his journey. His path, like any other two year old, is rarely a straight line. And that path Emmett created is an analogy of life. We may want the straight pathways like Tom (Tom, thank you for the ramp you made for Emmett and his wheelchair. We're thankful for that too!) made while he was cutting the grass on this large field; Emmett's path will likely always be like a wibbly-wobbly line, it is going to take longer to get from A to B, but perhaps along the way everyone with him will shout 'Yee-Haw' like Woody the Cowboy and Hiccup like a Hippopotamus* or caw like a crow. And I'm thankful for those precious moments.

*Don't understand, then you need to read the book Hiccupotamus by Aaron Zenz.

I'm also very thankful for OSM Websites who have provided awesome website support for www.emmetts-journey.com from the very beginning. Thank you. 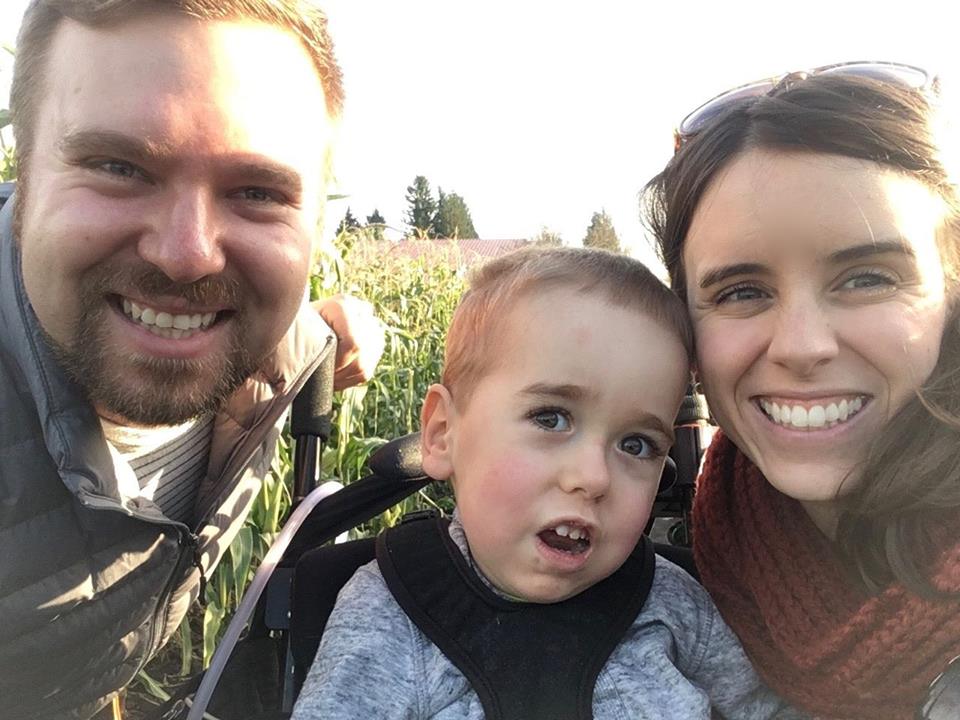 Awww Frank! Thanks for sharing your honest feelings with us. It is so tough we can't even imagine what you have to watch everyday and the futility of it, but then Emmett Smiles and washes those thoughts away with his sunny cheerful spirit! We are thankful for you and Pam, for your dedication to your Grandson Emmett, Daughter Alisha and Josh and for sharing their and your life with us. . We love you! Praying for you! One of my residents who has daily seizures asked about Emmett a couple days ago and told me she is praying for a miracle of healing for Emmett because she knows that God can do it! We are praying for a miracle too and in the meantime the strength and energy to endure and to enjoy loving your little boy who is growing up so fast! All my love
Categories
Archives
/dailyweekly-thoughts.php
Site proudly sponsored by OSM | Powered By SiteApex