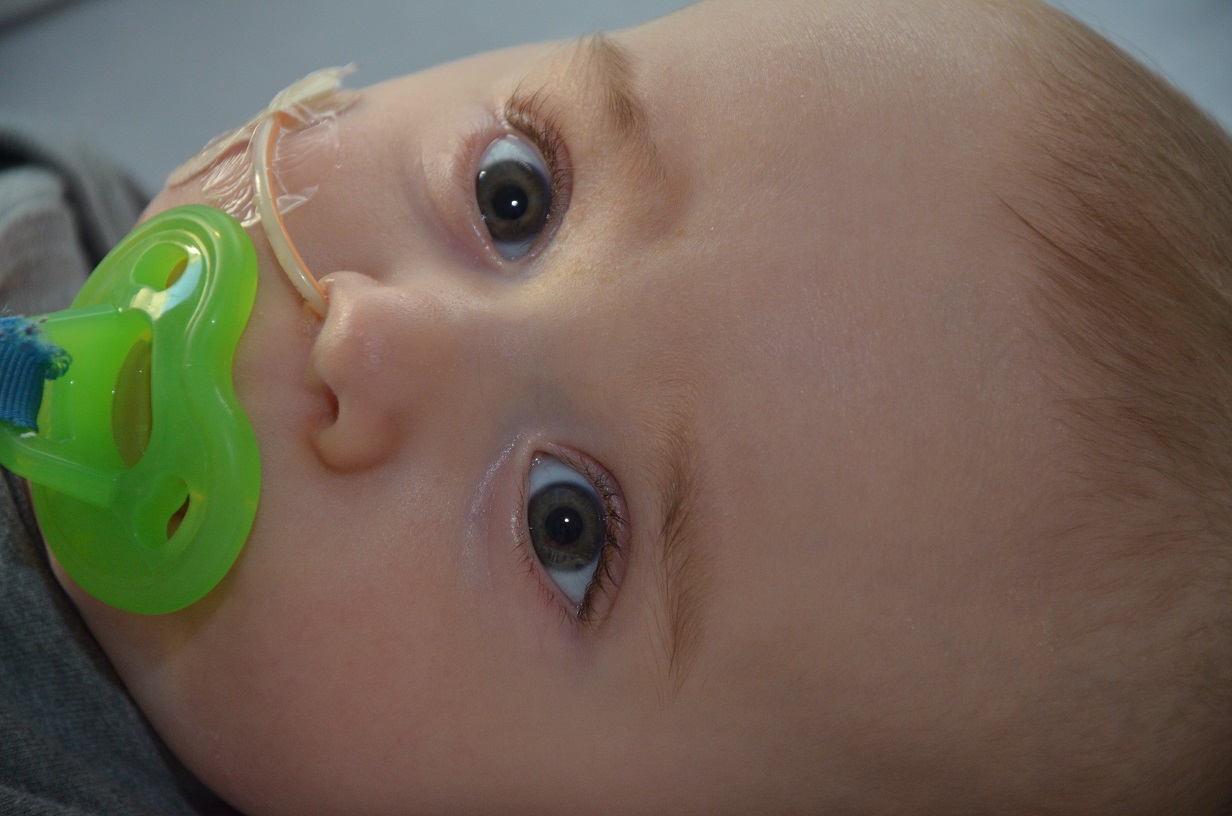 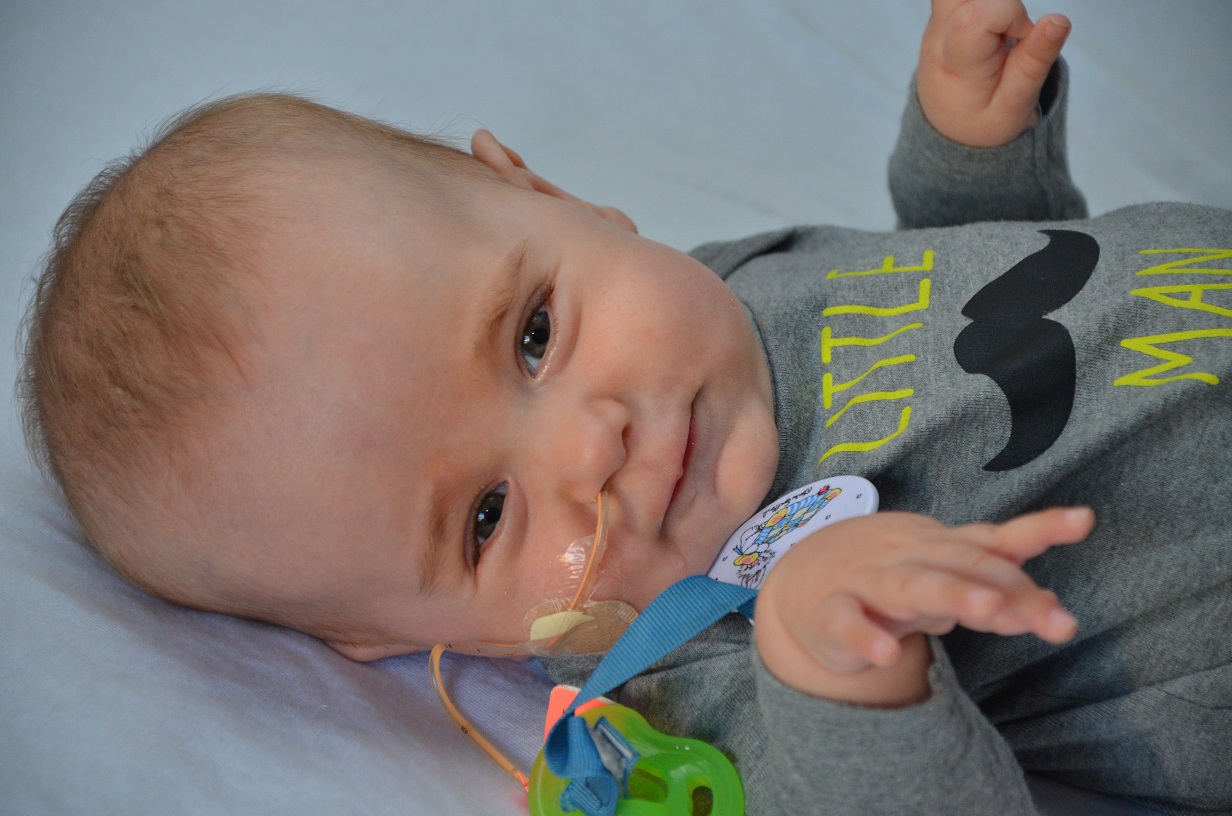 Emmett will be staying in his room, dubbed Emmett's Place, at BC Childrens' Hospital until mid-week. It will probably be Thursday before he is able to return home. On Tuesday his Nasal-Gastric tube will be replaced with a Gastric tube. This is a surgical procedure and he will spend at least Tuesday night in ICU. There was a small chance that he could have come home for the labour day weekend, and obviously Alisha and Josh wanted to bring Emmett home. They were a bit concerned that they hadn't received results from the sleep study yet, but were confident in their ability to feed Emmett with their newly acquired skills of using 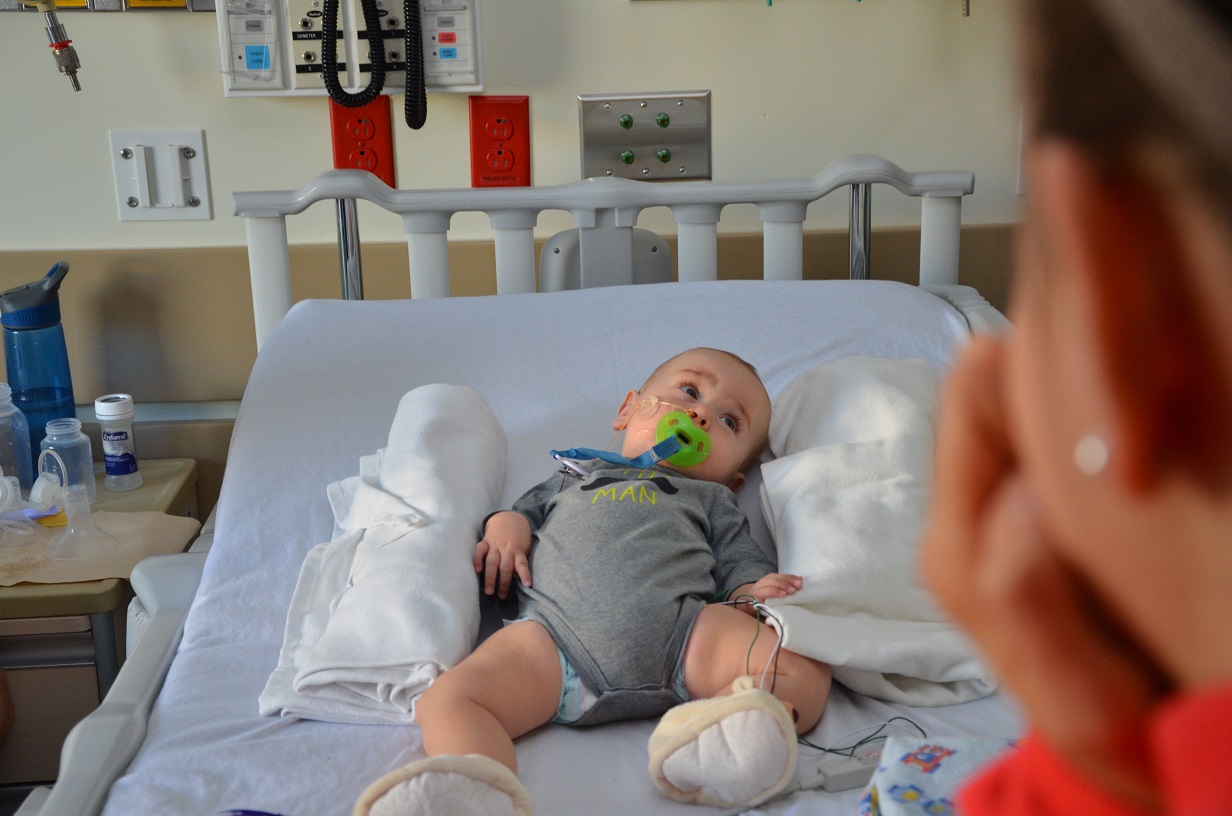 the Kangaroo feeding pump and the N-G tube. But it was Friday late afternoon and the hospital didn't have the right feeding pump for the current N-G tube so they couldn't leave. Emmett cannot be fed without that pump. To top it off, last night after his grandparents all left Emmett managed to grasp the N-G tube and remove it from his nostril. Alisha is pretty sure he realized that once he started, this was not something he should have done, but since he is a task oriented little boy he finished the job! 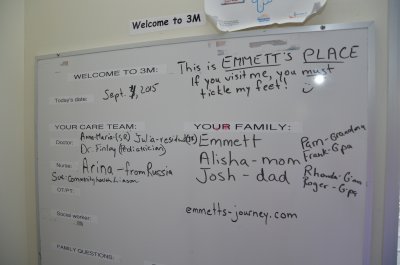 The N-G tube was easily replaced - well, if you were Emmett or Alisha or Josh it wasn't easy. Don't try this at home, but imagine sticking a flexible tube up (or is it down?) your nostril into your stomach. Emmett would say it sucks! And he is an expert on sucking! From this point on Emmett will not be taking any nourishment by mouth. We knew this would happen but really thought it would still be months - at least weeks - away.

Emmett's Place was very crowded last night as Roger, Rhonda, Pam, and I joined the room. Of course, every now and then a nurse entered the room. Earlier in the day a herd of doctors (is herd the proper term? I understand it was a whole bunch so herd it is) crowded in to observe Emmett, make diagnosis, and probably to learn about Spinal Muscular Atrophy, Type 1. This is a teaching hospital. 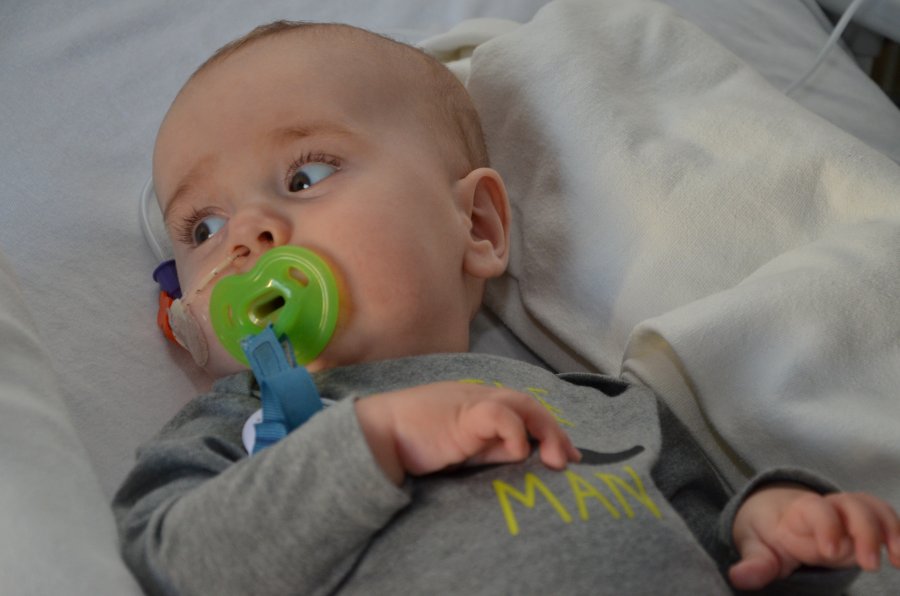 Alisha and Josh went for a long walk around the hospital's neighbourhood while the grandparents stayed with Emmett. This was after a meal of hearty, Mennonite soup and bread. Thanks Aunt June - delicious. Obviously, Alisha and Josh aren't eating properly. Aren't sleeping properly. And apart from the hospital to hospital transfer, Alisha hasn't been outside of the hospital since this crisis began. Josh, probably only to feed the parking meter. So a lovely walk through the local neighbourhood was good for them. 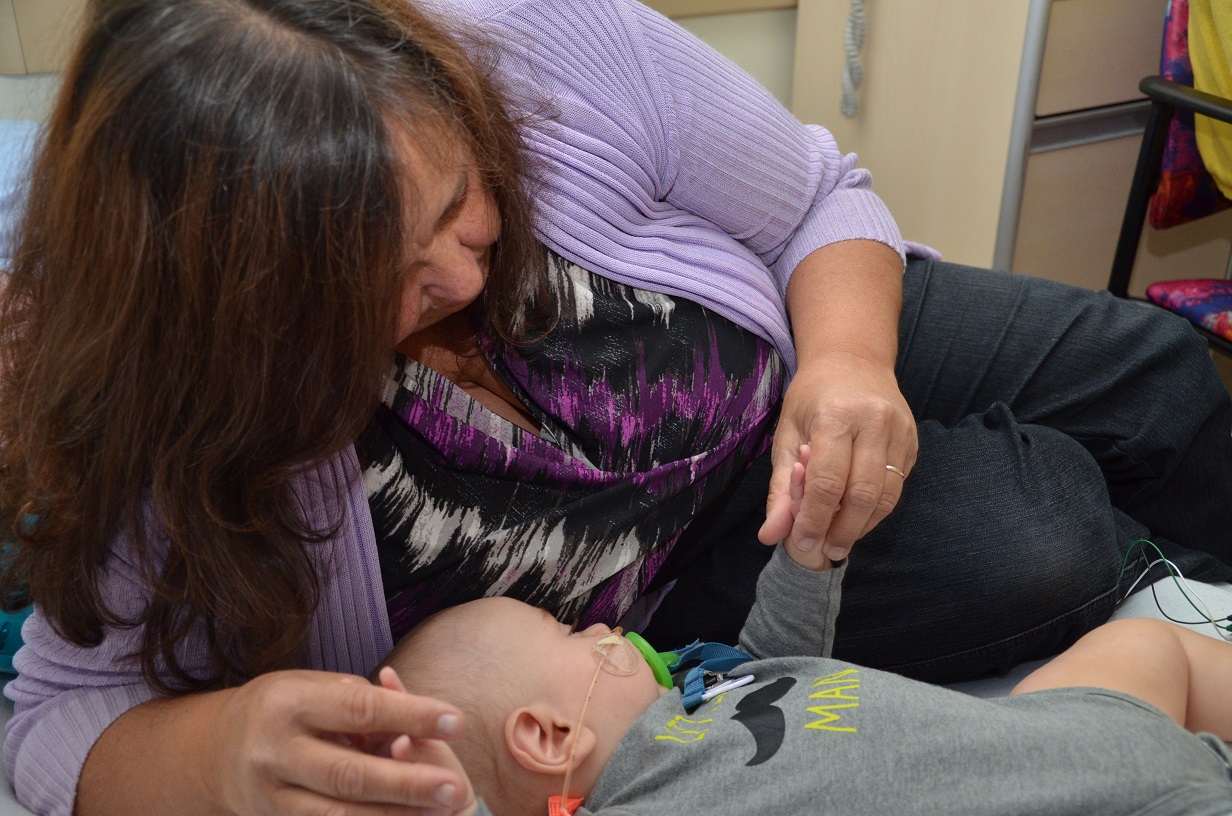 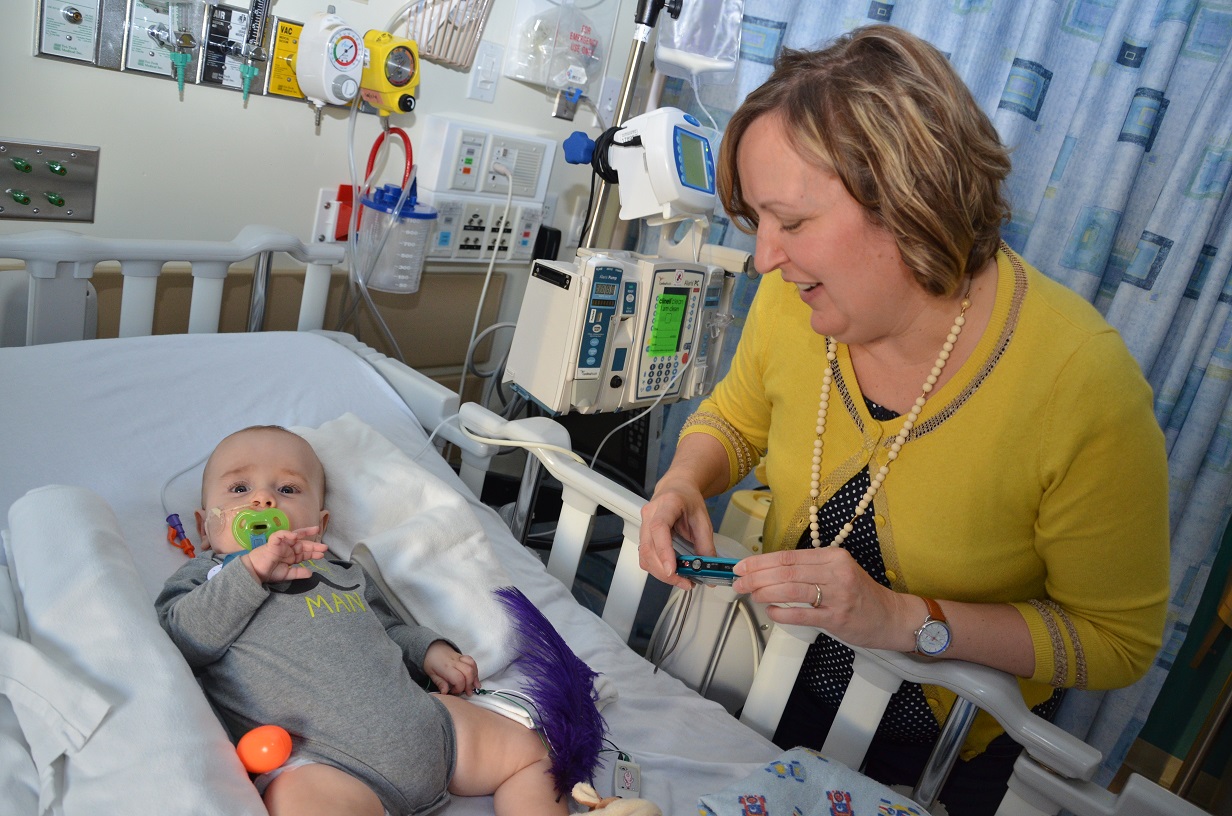 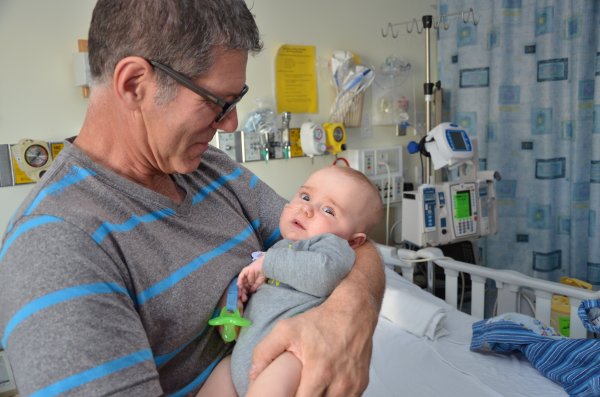 Oh my gosh, Josh and AlishaAs a former Grebelite, Conrad Grebel student, and presently EA at Breslau, I am praying for you, your family and especially Emmett. I can't imagine the pain you must all feel as Emmett experiences different challenges everyday. You have to remember that prayer can get you through such difficult times. Remember that God is always with you, and surrounds Emmett with His love, which is endless.Blessings to all of you.Wendy Priebe
Guest Comment 7 years ago
Site Visitor
+1

Emmett is beautiful! We continue to pray for you all. Much love, Uncle John
Guest Comment 7 years ago
Site Visitor

Josh and Alisha and Emmett: Our thoughts and prayers are with you and Emmett. I've read through the past several days of reports and am amazed at the journey and the faith. God bless you each one and keep you in the hollow of His hand. Uncle George and Aunt Shirley Ewald (Your Grandpa Frank's younger brother.)
Guest Comment 7 years ago
Site Visitor
+1

Emmett - you are fearfully and wonderfully made! What a blessing you are to all around you. Our prayers are with you all during this time. -Mandy Penner
Guest Comment 7 years ago
Site Visitor

Emmitt, your journey brings back the memories we have when our grandson was diagnoised with leukemia at 3 1/2 years. My prayers are with you and your family. I know that God is able to bring joy our of sorrow. Your precious life is in His hands. - Debi S.
Guest Comment 7 years ago
Site Visitor

Alisha, Josh, Emmett, Frank, Pam, Roger and Rhonda My prayer for each of you, is that you receive each, the strength and grace you need to meet each day, and that each day is also blessed with joy. Miriam
Guest Comment 7 years ago
Site Visitor

Love this little guys smile! Thinking of you all constantly.
Guest Comment 7 years ago
Site Visitor

Praying for you all. Monika T
Guest Comment 7 years ago
Site Visitor

You're doing a great job with this blog; thank you so much for updating it. I really appreciate being able to read about what's going on with Emmett, Josh and Alisha and the families. Am praying for you all and sending so much love, especially to little Emmett! - Stef H in Ontario.
Guest Comment 7 years ago
Site Visitor
+1

Emmett is blessed to be surrounded by the great love of his parents and grandparents. We pray without ceasing for you and your baby boy. May you feel the love and support from all of us. Thank you for the updates. While it may be hard to write them, especially after a difficult day, we appreciate the effort it takes to do this. With all our love, the Gooch Family.
Guest Comment 7 years ago
Site Visitor
+1

Thankyou for sharing this incredible family journey with us. Emmett gives us all cause to pause and reflect on the true meaning of life and the value of love. Hugs and prayers for you all.Dana
Categories
Archives
/dailyweekly-thoughts.php
Site proudly sponsored by OSM | Powered By SiteApex