This is Emmett's fifth anniversary of the start of Spinraza, which in 2015 was known as SMNrx. This name changed to Nusinersin and now is best known as Spinraza. Emmett had the first of many lumbar punctures on October 7, 2015. This fifth anniversary post got postponed as BC Children's hospital had to reschedule the October 2020 until November. This LP, #19, will take place on Monday, November 2, 2020.

There was no treatment available when Emmett was diagnosed with Spinal Muscular Atrophy, Type 1 five years ago. Emmett, however, was just the right age and weight in the fall of 2015 to be accepted into a study for a pharmaceutical drug trial. It was a drug that had a lot of promise but with a drug trial there are so many questions and very few answers. This trial would involve 124 similar aged babies from around the world. All with one common feature - they had SMA Type 1.  SMA is the number genetic cause of death for infants - the trial for Spinraza was brought to an early close as those on the drug were improving and those receiving the placebo were failing - they were then given the drug. It was approved by the FDA and Health Canada afterward.

To understand how much Emmett has progressed, you need to realize that Emmett had lost all movement of his legs by 3 months of age. By 5-6 months of age he'd lost the majority of movement in his arms. He could no longer grasp things with his hands and fingers. He'd never been able to hold his head up. Obviously, he could not sit up on his own. Travelling had to switch from a car seat to a car bed - as the seated position caused too many issues with choking on saliva. All nutrients and liquids were by G-Tube (gastronomy tube) as swallow studies revealed that he wasn't swallowing properly. There were a trip or two to the emergency room due to choking/stopped breathing. October 2015 Emmett was accepted into the trial for this drug - it was a blind study in which 2/3 of the children would be administered the drug while 1/3 would get a placebo. Apart from the fact that even with a baby it's difficult to fake a lumbar puncture, small signs of improvement told us Emmett was getting the drug. You see, with SMA an individual may level off in their decline but there was no medical record of any individual with this genetic disease showing improvement. Emmett was improving.

Fast forward five years to 2020. There are now multiple treatments available for SMA.  The first is this drug Spinraza, the treatment that Emmett is on, which can be administered to SMA patients at any age. After the initial dosing, it is administered every 4 months by lumbar puncture. Babies who receive this treatment immediately (days old) are walking, eating, and demonstrating incredible movement. There is the gene therapy treatment that has been getting a lot of press lately. It is the $2 million US dollar one time gene therapy treatment called Zolgensma that is for children under 2. Then there is the oral treatment that is taken daily called Risdiplam (Evrysdi). Of these three which are all approved in the USA for use, only Spinraza is approved in Canada. And in Canada provinces still limit, due to financial implications, who may receive Spinraza.

Emmett can hold his head up. He can wheel himself around on smooth, flat surfaces with his manual wheelchair. He can hold a pencil or marker and print his name. When placed in a sitting position, he can maintain it for a considerable length of time. He loves telling stories and playing jokes on people. He loves to have ice cream - he takes very tiny spoonfuls and can feed himself. However, his suction machine is always within reach as choking is still a significant concern. Emmett can usually tell us when he requires suction. While infrequent, there are moments when intense suctioning is required and everyone's heart beats hundreds of times a minute. Once cleared, Emmett returns to play instantly. He's fine, even if we may need a few minutes to recuperate.

This is the fifth anniversary of Emmett being on the drug Spinraza. To celebrate he is getting another lumbar puncture on Monday. More of this drug which has changed his life. More stories of his joy of living to share. 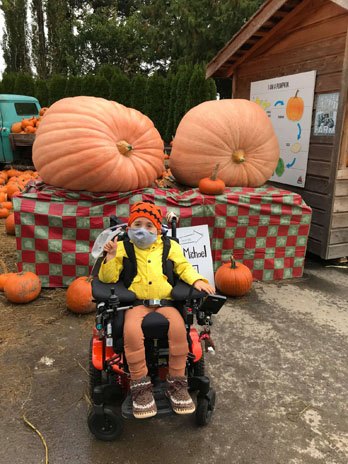 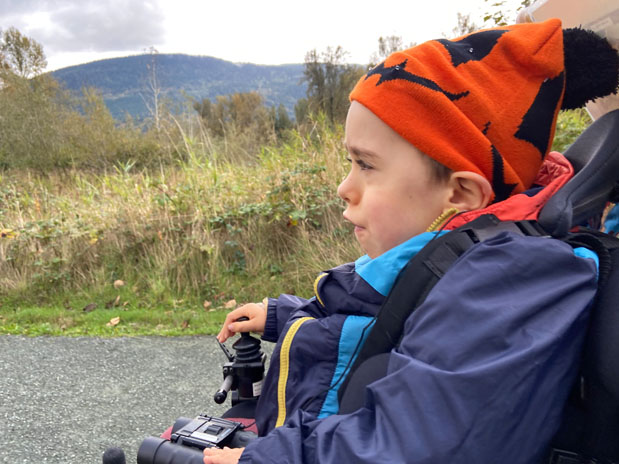