Since August is Spinal Muscular Awareness Month, what better way to bring awareness that a little boy having fun going down hills and winning races. So here is the video "Wheeee!" in which Emmett is out and about in his awesome burnt orange wheelchair. You will want to have the sound on!

What a Difference Five Years Makes!

Did you think you would see a tube fed little boy enjoying an ice cream cone! Look again, because that is absolutely what is happening. A couple of weeks ago Emmett said what we know many kids say to their parents. "Let's go to McDonalds!"

This picture says it all! Emmett is sitting up in his car seat, holding onto his ice cream cone, and eating it. Yes, he is eating it and he can swallow it too. He loves ice cream (strawberry ice cream is the best!). **In case you're wondering, Emmett takes a few licks and then he is full! **

Five years ago today Emmett was diagnosed with Spinal Muscular Atrophy Type 1. This disease removes the ability of the brain to communicate with muscles. And not just large and fine motor muscles - but the ability to swallow and even breathe. It is a devastating disease. In the fall of 2015 Emmett started on an experimental drug. This drug called Spinraza is injected by lumbar puncture into his spinal column every four months. The result is the little boy that you see holding up his own head, holding onto his own ice cream cone, and licking and enjoying his own ice cream cone.

Then there was the morning when I was at their house running an errand. Emmett was doing his leg exercises and shouted, "Grandpa, look at me!" so of course, I did. Even though I already was. And I saw him doing his exercises which was fantastic. But he had to tell me that he had his AFO's on. I didn't notice that. Emmett doing a workout with his AFO's on is like you or I going for a walk with 10 kg weights on our ankles. This little boy is so strong! Who knows what is next.

We are so proud of Emmett. We are so in awe of this little boy. He fills our hearts to overflowing!

Emmett didn't get his fifth birthday cake from Grandma Rhonda last March - but she's outdone herself with the best hippo cake the world has ever seen! Emmett loved it!

This blog post was inspired by Emmett and also by the book Zoom - written by Robert Munsch and illustrated by Michael Martchenko. 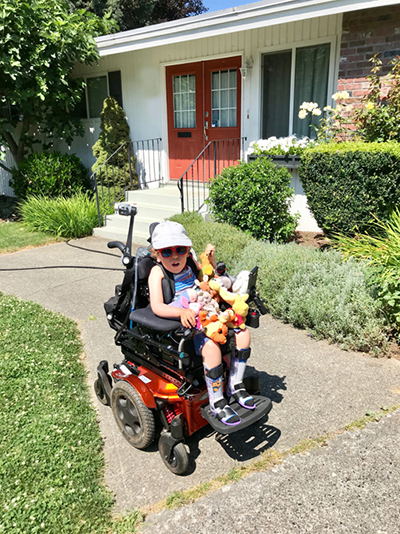 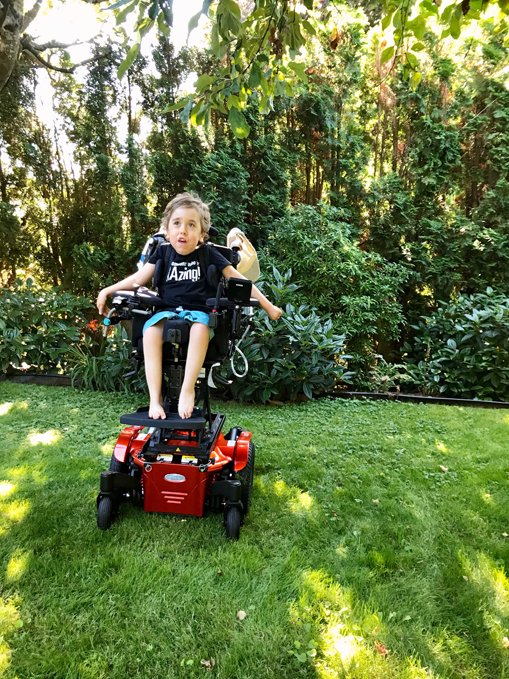 I am so happy with my new power chair. It is awesome and very fast and the best thing of all is that it is orange.

Thank you to everyone on Emmett's medical team who helped make this happen. Thanks to the BC Government for funding the chair, and for the support from the Shriners in funding important extras required to make the chair more functional.

August is SMA awareness month. Emmett was diagnosed with Spinal Muscular Atrophy, Type 1 in August 2015. This disease is the #1 genetic cause of death of infants. By the fall of 2015, Emmett could not be upright for any length of time as he would choke on his own saliva (this is why he still has a suction machine that is always within reach). That fall Emmett also started receiving the drug Spinraza, which has opened new pathways for messages to get to his muscles. You can see the progression throughout these photos. Thank you for following our blog and learning more about Spinal Muscular Atrophy. Learn more at Cure SMA Canada and Cure SMA.

This was a great article! Love how happy he is and how well he is doing.
Categories
Archives
/dailyweekly-thoughts.php
Site proudly sponsored by OSM | Powered By SiteApex