Emmett had as good of a night last night as he could be expected to have. Yesterday was very challenging for him and his parents. (I think they were much stronger than I was!) Your prayers and words of support are so appreciated.
Emmett's Journey the last few days has been described by friends as being like a Tsumami of emotions. Over and over. This is very true.
Facebook is great but all it takes is one person to like a post and your newsfeed gets updated with a post that might already be old news. To ensure that you are not looking at events or sharing events that are out of sequence, we refer to you Emmett's Journey. His blog will be as up to date as we can provide. Plus the sequence of events should be clearer than FaceBook provides. When you check the blog, you will possibly notice that facts under the title may be updated throughout the day.
Thank you so much. Emmett is an amazing little boy. Many of you know that and you've only met him through this blog. I promise that in person he is even more adorable than words and photos can portray. He is also stronger than any of us! I cannot believe how hard this little boy fights! In case you didn't know already, he is our hero! Please note: There may not be too many photos over the next day or two.
Posted by ewaldf @ 12:00 am
Share
Comments
Login

We continue to pray for dear Emmett, and for all of you. Thank you for the updates in the mist of the tsunamis!
Guest Comment 4 years ago
Site Visitor
+1

Praying for Emmett and his family.
Guest Comment 4 years ago
Site Visitor
+1

Thanks for updating us. Josh, Alisha, and family; Im praying for Emmett and for you. My heart is aching for you all. Sending lots of love and prayers your way!Yvonne

Emmett is having a very rough go right now. His medical team is discussing what to do next. He is not getting enough oxygen. They're raising his bi-pap as much as they can. Obviously they're monitoring him, but if they deem that is not enough then they may intubate him. This is a more invasive procedure - and very scary for all of us.

I can only ask that you pray for him. He is in the hands of the best medical team available to him.

Alisha and Josh have barely left his side since being admitted Friday. Pam and I were with him all afternoon. While he was obviously struggling we were optimistic. But now the doctors need to make some decisions and Emmett needs a boost of strength.

This illness hit him rapidly late Thursday night. It's still progressing rapidly. There is a bunch of mucus/secretions in one of his lungs. They're doing chest physio and suctioning every two to three hours to get it out. Intubation is a definite possibility if he continues to get worse. This could lead to a bacterial infection like pneumonia in his lungs. We beg our family and friends to pray - and get family and friends to pray.

We know that God has this special little boy in His care. We are asking for a miracle for Emmett and peace and rest for Alishia

Thank You: Day 5 here we come!

Around 4 p.m. Emmett was intubated. It went well. While we were hopeful that this could be avoided, it is better to happen now rather than in a crisis moment in the middle of the night. Our fear is that Emmett, whose lungs are already weakened from SMA, would not be able to breathe unassisted after he recovers from this RSV virus. Alisha and Josh have received very reassuring medical opinions that Emmett will be able to breathe on his own after the tube has been removed. In fact, they will be encouraging Emmett to breathe himself even while being hooked up. It also means that Emmett no longer has the mask on.

Continue to pray for Emmett. He is Alisha and Josh's darling little two year ten and a half month old little boy.

He is argumentative! He is talking and expressing himself ... a little bit. He is moving his arms about. During rounds this morning the physicians are thinking that last night was the low point and that he's on the way up. This is certainly what we hope he is experiencing.

Emmett is a fighter. And we see it.

Thank you so much for your prayers and support.

Emmett just had a chest x-ray and his lungs clearer than they were last night. He is still breathing with bi-pap support so there has been no invasive procedure. Obviously, the next 24 to 48 hours are going to be challenging.

According to a text from Alisha and Josh, his oxygen levels are better than yesterday. He still has very rapid breathing. His heart rate is still fast. And even though he is getting sedation via an IV, he's still not sleeping well.

We will try to update the blog through the day ahead.

Day Three and Emmett is still fighting this bug. The challenge with RSV is that it seems to be hurting Emmett. Previous illnesses he has been miserable and felt horrible, but this rotten virus seems to be hurting him and there is nothing we can do. Obviously, he's getting tylenol (or whatever the hospital provides) to relieve his aches and pains, but it doesn't seem to be working very well. Yesterday afternoon he had a sponge bath and had about a half hour off of his bi-pap when he felt a bit better. But it didn't last. And today so far he's just feeling yucky.

That is, of course, scary. Alisha and Josh appreciate your prayers and support. They are checking FaceBook and Messenger and appreciate all of the messages - even if they aren't always able to respond. Grandma Rhonda and Grandpa Roger are there today. Visiting with Emmett and allowing Alisha and Josh a change of scenery. (Hmmm, I wonder if they will go to the van and watch Toy Story!) 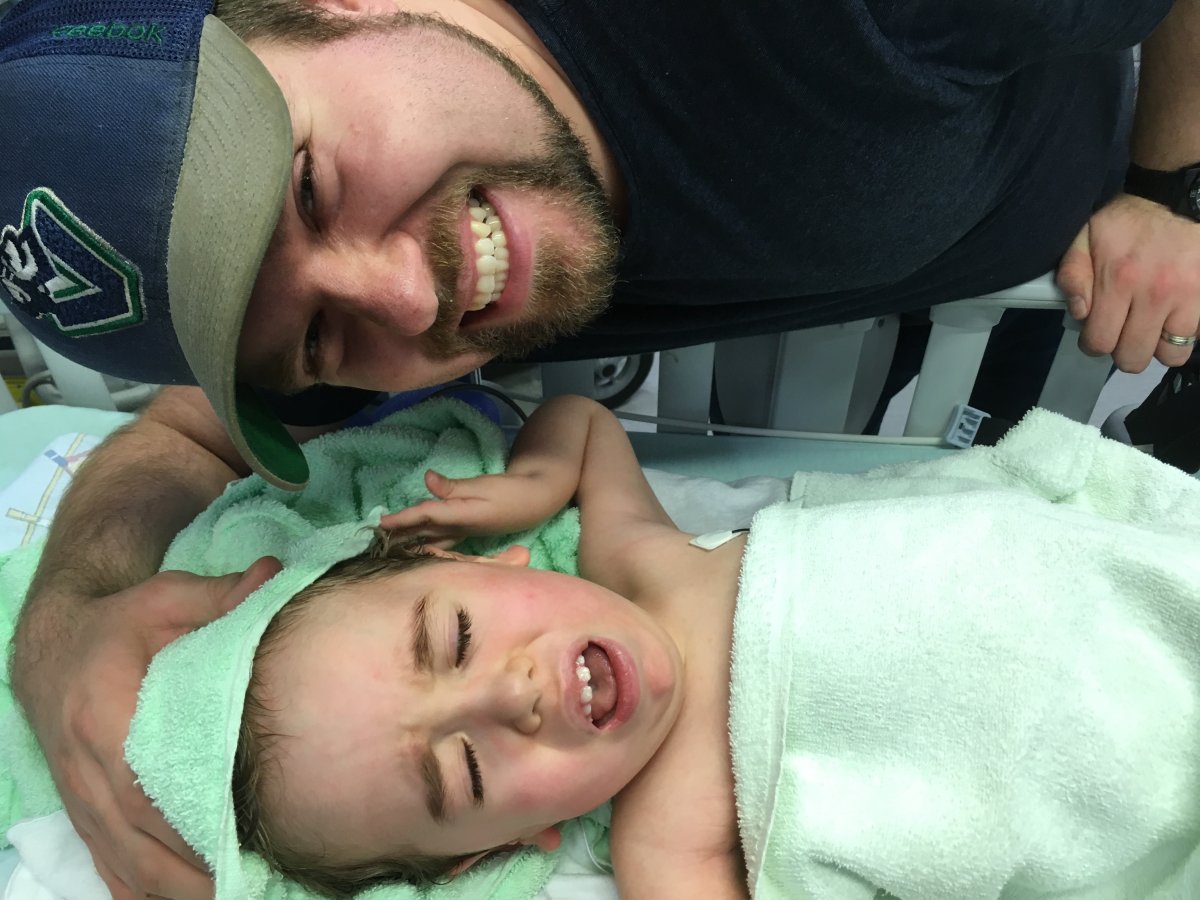 After Saturday's sponge bath it was time for photos! Emmett was happy up to that point - but he did not want any photos! 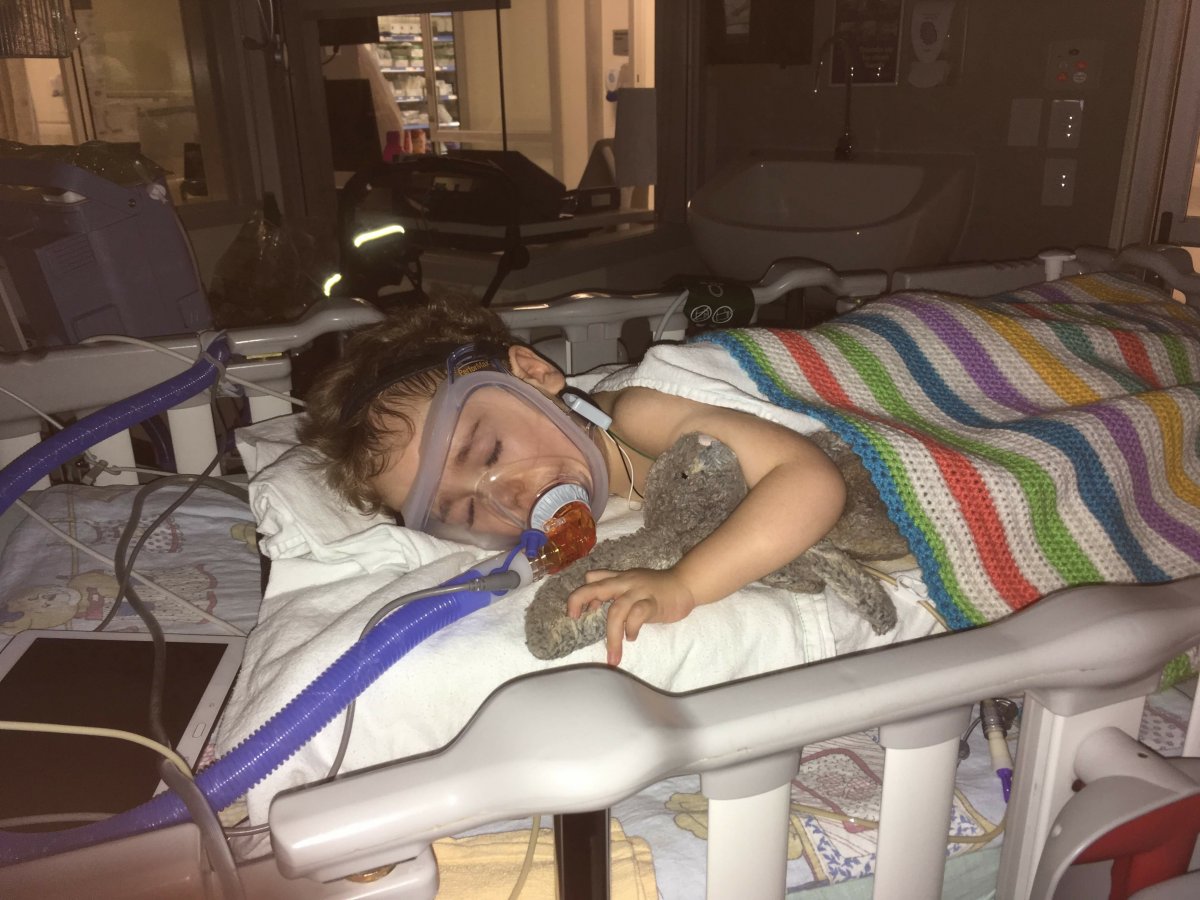 Emmett's usual bi-pap has been exchanged for hospital equipment during his stay. He's receiving oxygen also. Normally at home it is just the regular atmosphere. Of course, his faithful bunny is with him. Tomorrow some of his Toy Story friends will join him.

When he is sick, it takes all of Emmett's energy to just handle the basics. There's very little play and almost no chatter. Unfortunately, this RSV virus is going to have it grip on Emmett for a few more days. It has to run it's course!

Been following the journey for all of you and pray for relief for Emmett from this RSV bug. With love and prayers, Anne
More Posts
Categories
Archives
/dailyweekly-thoughts.php
Site proudly sponsored by OSM | Powered By SiteApex