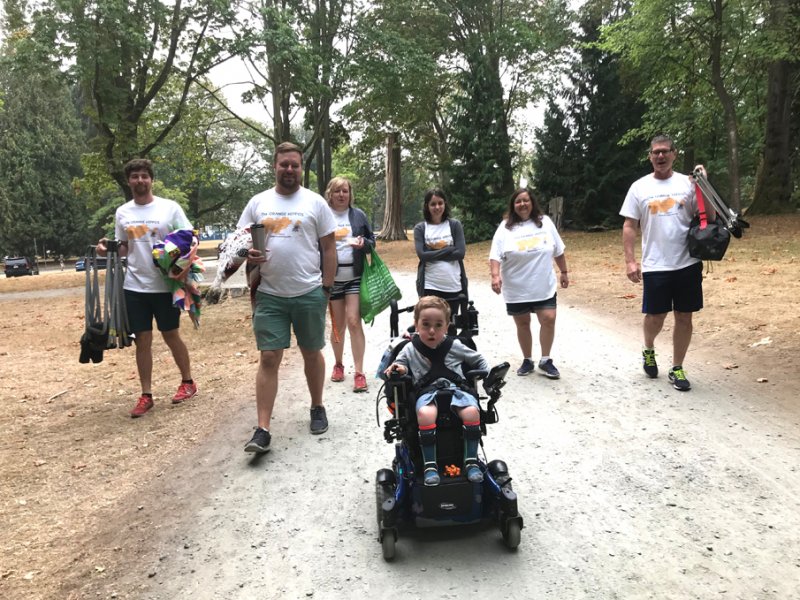 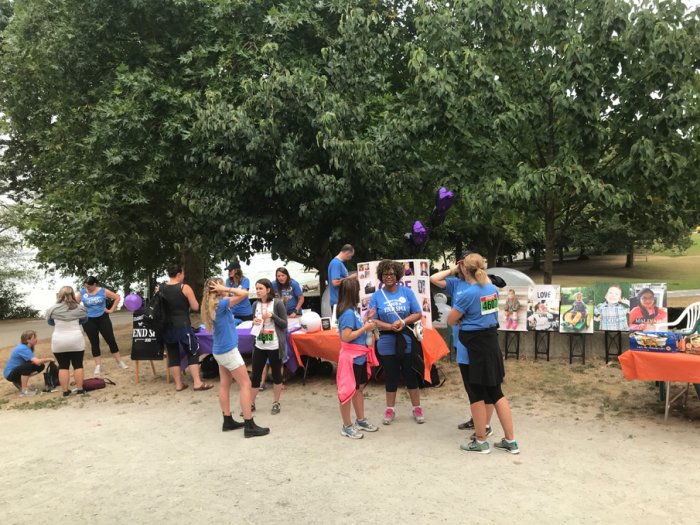 Race Day. 10K! Checking the weather for heat updates ... smoke updates ... Ensuring that enough liquid to stay hydrated is on hand ... Having a healthy snack ...Waiting at the start line ... Adrenaline sets in! Ready ... Set ... Go! That is the pre-race scenario for most racers.

For The Orange Hippos it doesn't look anything like that. The check list is:  Suction machine √ Spare Suction Machine √ Food Pump √ Chair battery charged √ Hand Sanitizer √ Bi-Pap machine - it can stay in the van for the ride home √. Go! Wait, what! Go? We're already on our way - why did they take so long to say go! 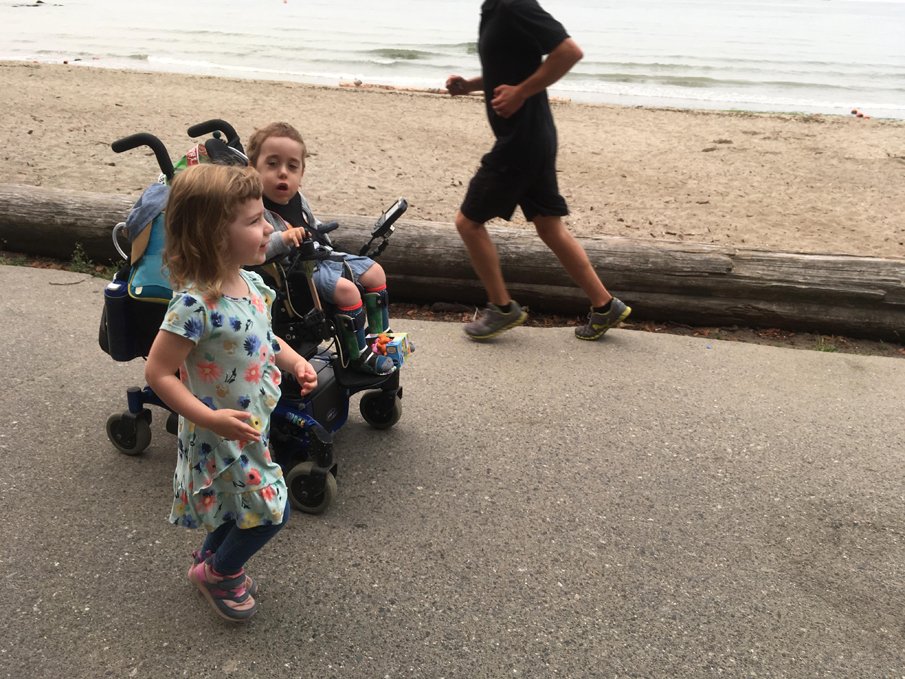 It was a fantastic day and huge congratulations to the Team that put on Florence and Charlies' 10K to End SMA. They raised in the neighbourhood of $40 000.00 for CureSMA Canada. Of that, our amazing supporters behind The Orange Hippos raised just over $6 300.00 and we greatly appreciate your support for this cause that is so important to our family. The winner of The Orange Hippos T-Shirt draw is Billie - a lovely young lady from England who has been a long time fan of Emmett. Congratulations, Billie! We will get your t-shirt off to you shortly.  Family and friends are so important. One of Emmett's best friends, Felicity, and her mom were also there running and rolling by Emmett's side. It was so good to celebrate together. 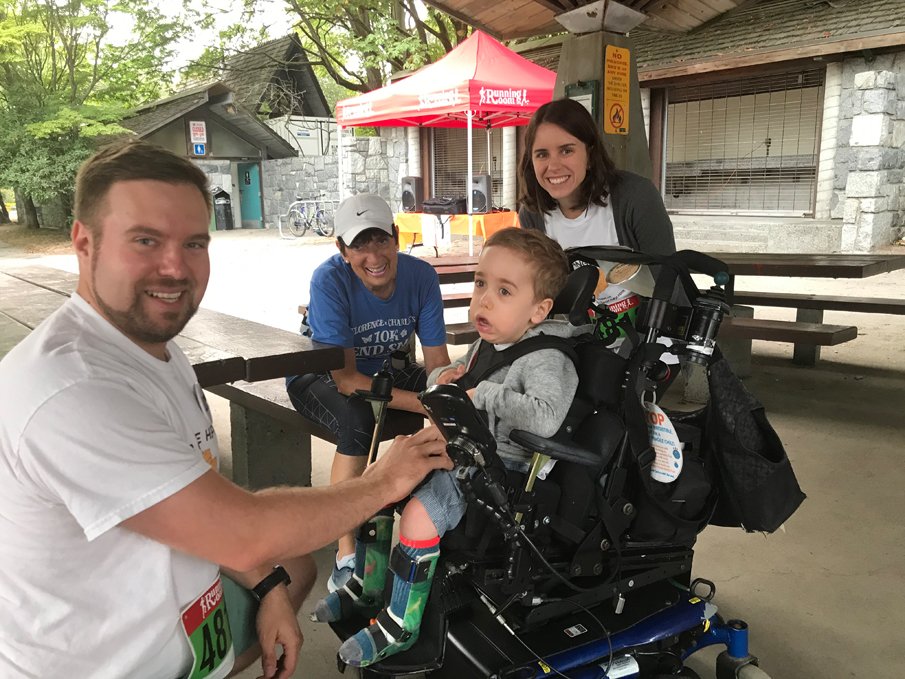 While getting prepared for the race Emmett had a chance to chat with a fellow participant - his amazing neurologist from BC's Childrens' Hospital. She has participated in every one of Florence and Charlie's 10K to End SMA events. She also is involved as a key member of most, if not all, of the B.C. kids who have Spinal Muscular Atrophy. Any Type. Alisha and Josh met with her three years ago as Emmett's diagnosis was made at BC Children's Hospital and she has been by their side supporting them since.  His medical team is absolutely amazing. There is no question that the medical team that is involved with Emmett is a huge part of this families life.

Emmett got off to a great start and was the race leader for the first 100 metres. It was a good thing that the starter wasn't right at the start line or they would have noticed that Emmett took off a few seconds before the 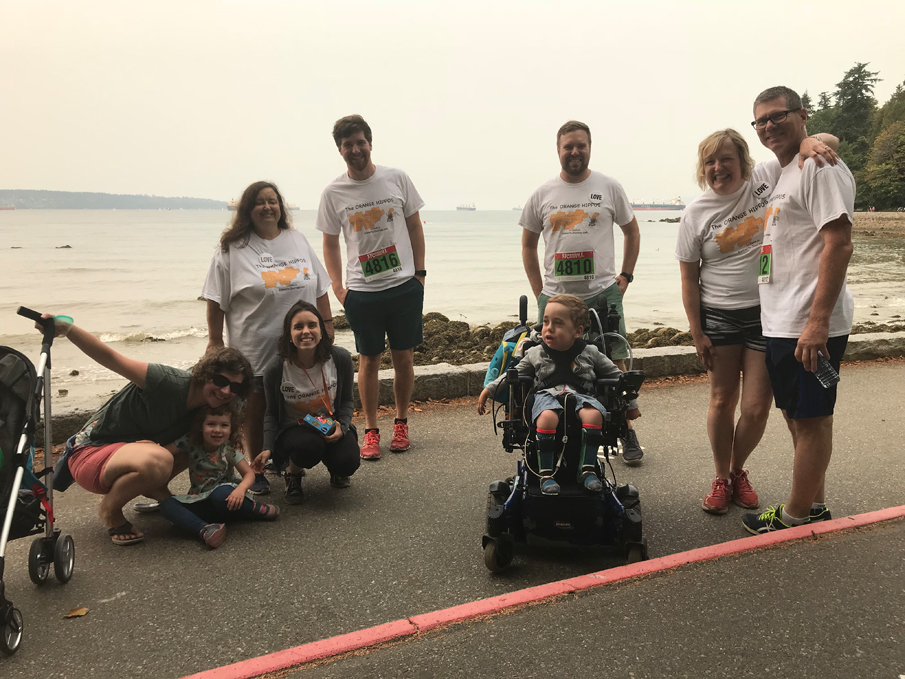 offical 'GO!' was sounded. About 400 metres into the race Emmett needed to stop under a shade tree to lie down for 5 or so minutes. He got quite choked up - was it the excitement of the race? the smoke haze from BC's wild fires? The rather strong fishy smell from the ocean? Sure, each of those had a little bit to do with it, but the primary factor is because Spinal Muscular Atrophy interrupts activities and demands attention at a moment's notice. SMA stops the brain from communicating with the muscles - and not just simple things like legs and arms. He cannot swallow. He has challenges breathing. SMA has a major impact upon his life and upon every other child and adult afflicted by this disease. A suction machine to remove saliva that Emmett cannot clear on his own is simply a regular part of life. The fact that he'd been cruising around the park pavilion and the area around Ceperley Park for just over an hour meant that he'd had quite a bit of excitement and exertion before the race even started. If you're wondering about the sepia tone in the photos, that is being caused by the extensive forest fires in B.C. and the smoke is now having a huge impact - including Stanley Park. 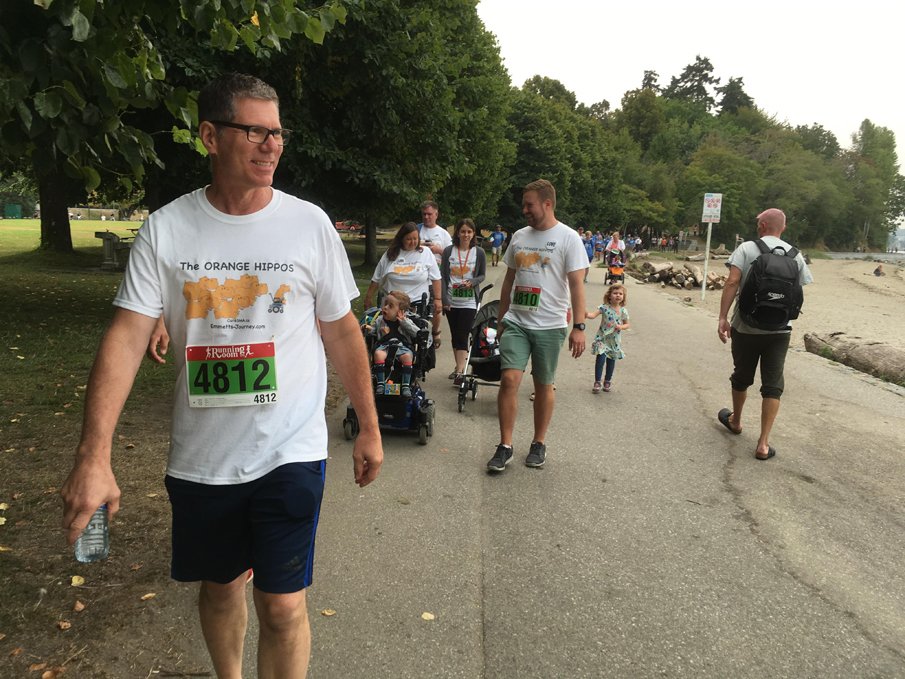 Here we have a confession to make - Emmett did not cover all 10K. That is simply not a reasonable challenge for a three year old. It really doesn't have as much to do with the fact that Emmett has SMA Type 1 as it has to do with being three. Thus being distracted by anything and everything that is around him. Emmett did go through the start and finish arch at least a dozen times. He loved looking at all of the rocks out on the beach. As he looked out at all of the ships moored out on English Bay his comment was, "Follow the Leader!". I had to take a second look and then observed all the ships moored in a line. At the awesome stone stairs that led down to the beach, Emmett had to stop - obviously. But he directed me to go down the stairs and back up. He still got to experience the stairs. Going in circles for at least 20 minutes on the smooth concrete pavilion floor. Then he played bashful while meeting all kinds of people - there were over a 100 participants and I'm guessing at least 20 of those were in wheel chairs/power chairs/mobility strollers.

After that initial pit stop at the 400 metre mark Emmett was a solid competitor. Passing by the swimming pool 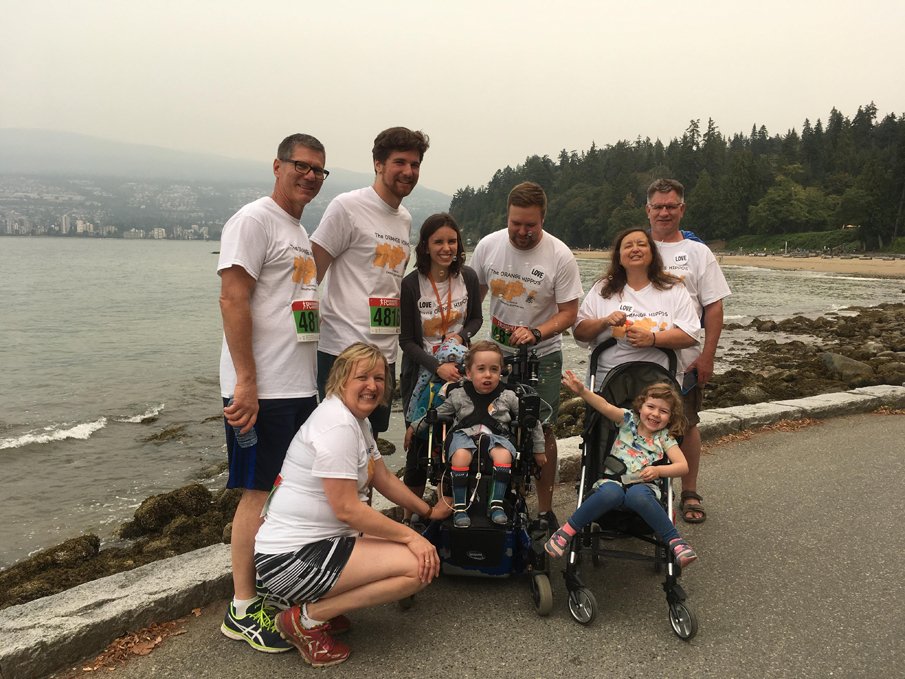 was an understandable challenge - he really wanted to go swimming (the pool being at about the 700 metre mark meant for another early race slow down). Staying on the right side of the pathway was a challenge. Emmett is three and he likes meandering strolls rather than straight line express routes - and at busy Stanley Park there were one or two near misses! Fortunately most people are amazingly understanding about a toddler in a wheelchair who nearly mows them down! Emmett probably covered about 3 kilometres of the total route, but do not let that mislead you. Throughout this excursion he probably covered 8 kilometres - I know that because while I was with him my iPhone recorded over 10 000 steps. There were several instances where I was the pivot point with Emmett doing circles around me making me dizzy. And there were 5 other adults also trying to keep up with Emmett. So there's no doubt that Emmett did the equivalent of between 12 000 and 16 000 steps!

Crossing the finish line brought this 10K roll to an end. This is just one small facet of the endurance race that all of us, Emmett included, are in.

August is SMA Awareness month. Throughout this blog there is a lot of information about SMA. You can also visit CureSMA Canada or CureSMA USA. If you're outside of these two countries, there are advocacy groups in many other countries. 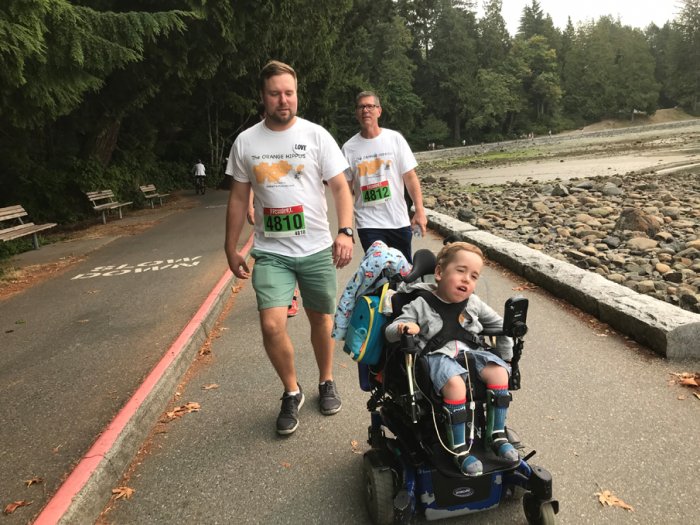 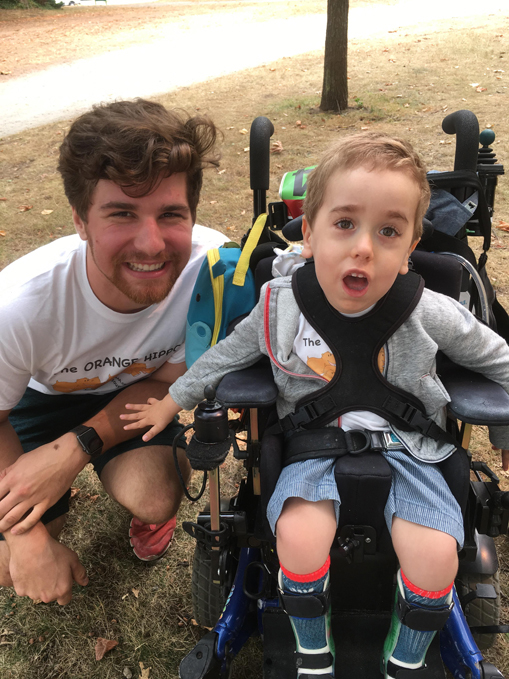 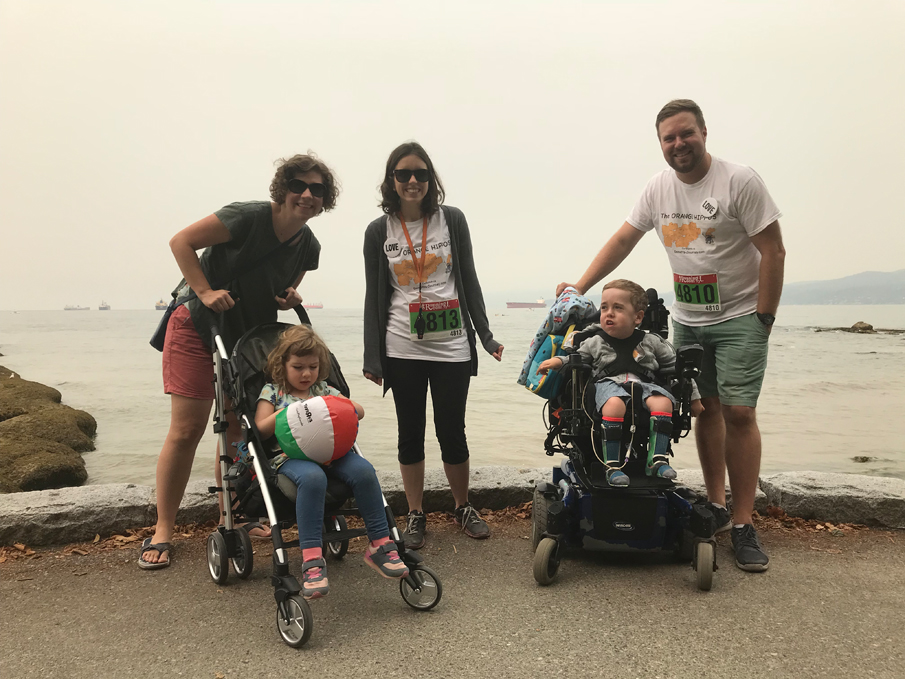